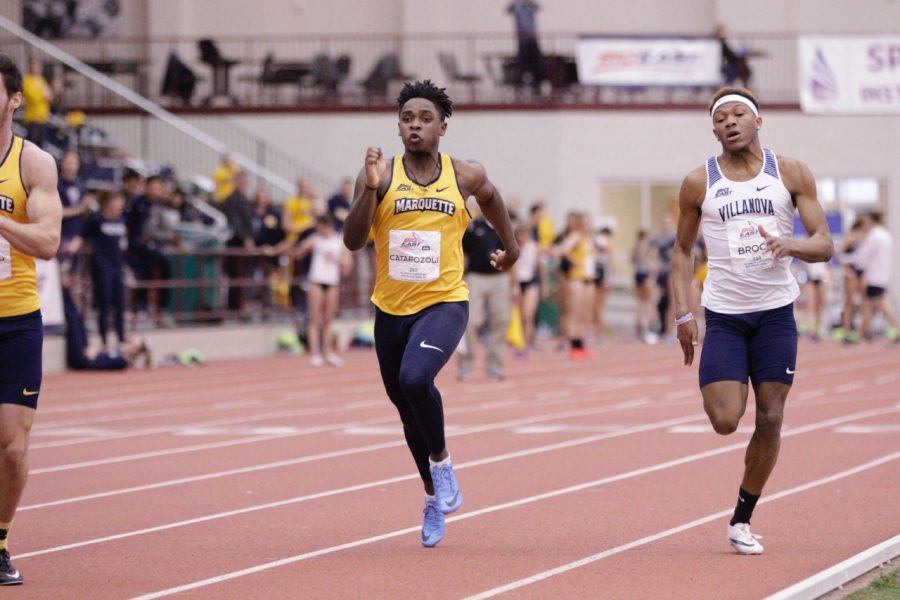 While the recruiting process changes the rosters for fall sports teams on campus, the process never slows down.

Recruiting is typically one of assistant coaches main responsibilities in the program, in addition to some work from the head coach and potentially talent scouts as well.

The principles of recruiting remain the same for men’s soccer and other teams on campus: keep the same focus on many of the best athletes in the area.

“First and foremost, we look local,” Hughes said. “If we can find a player local, we can find out more about academics, character, and see them play in person. Then we’ll look regional and international.”

Many athletes embrace being at a university so close to where they grew up.

For A.J. Catorozoli, a sophomore track and field athlete from Milwaukee, being close to home has its perks.

“Having friends and family be able to see our meets is awesome,” Catorozoli says. “We had a home meet last year, and I ran my fastest time ever in front of my entire family. It was a really cool experience.”

Alex Mirsberger, freshman on the men’s soccer team and Brookfield native, says Marquette coaches discovered him at a camp  and their relationship grew from there.

“The coaching staff really showed interest in me,” Mirsberger says. “They showed me they were going to take care of me and help me get through four years while having a good time doing it.”

Aubrey McLaren, a freshman on the women’s lacrosse team and native of Whitefish Bay, says growing up close to Marquette allowed her to get to know head coach Meredith Black far before her recruiting process began. She played for Black on a club lacrosse team called “Black Lax.”

“Coach Black worked with us a lot on recruiting,” McLaren says. “With how good of a coach she is, and with how much she has done for the sport of lacrosse in Wisconsin, it made me want to come here and play for her. It feels like home.”

There are different ways of recruiting, but the most important part of bringing in an athlete and selling them on the program is the relationship and trust being built, Hughes says.

“When we bring an athlete in for a visit, we already have a relationship with them,” Hughes explains. “We identify that academically, character-wise and of course play on the field that they would be a good fit, and then the visit is usually one of the final steps.”

Catorozoli, Mirsberger and McLaren say even if playing a sport wasn’t an option, they are still interested in Marquette as a school.

“I knew Marquette was a good school and good university,” Mirsberger says. “To be able to come to school here along with playing soccer in front of friends and family is awesome.”

Experiences of seeing hometown players succeeding at Marquette keep recruiters like Hughes passionate about shaping the lives of young athletes.

“You get to make young athlete’s dreams become a reality,” Hughes says. “You see players develop from when you first make contact in high school to when they graduate from Marquette. You have a big impact on someone’s life.”