Nine Halls and One Million Memories 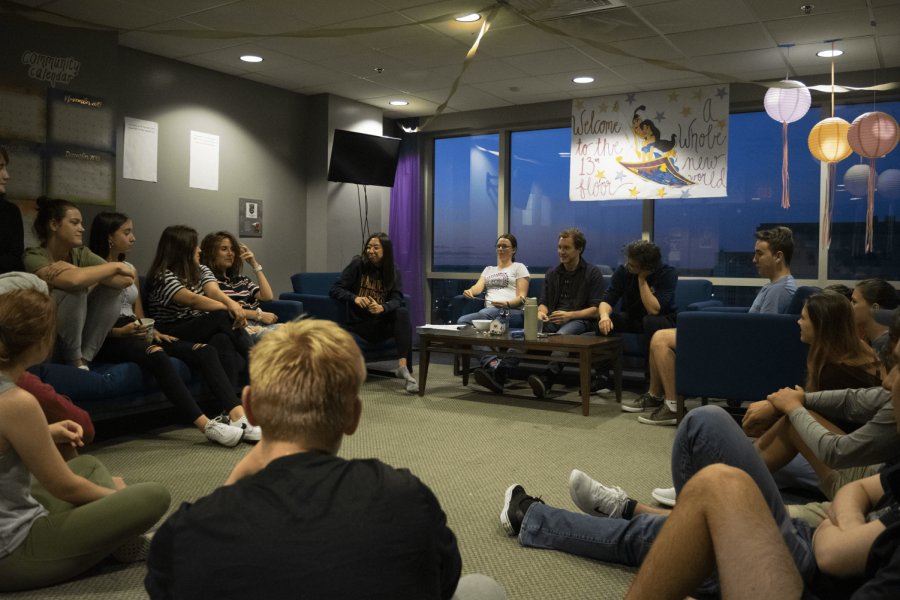 Students attend a floor meeting in their decorated common area on the 13th floor of Straz Tower.

Students can call nine residence halls home at Marquette University. Each hall has its own unique styles and traditions too, just ask those who live there.

Abbotsford’s ‘open door’ philosophy is what Andrew Pytlak, a sophomore in the College of Business Administration, says makes strangers friends. He thinks Abbotsford is a great place to meet more people because Abbotsford is known for its triple rooms.

More than 300 first and second-year students live in Carpenter Tower. Its’ friendly vibes has each floor feeling like a community, says Edward Davies, a junior in the College of Engineering. Though Carpenter Tower is fun, Davies says it’s about those he lives around.

As the only all-female residence hall on campus, Cobeen Hall has a positive dynamic throughout the entire building. For Theresa Akinbobye, a sophomore in the College of Nursing, Cobeen provides a perfect bonding experience for residents and residence assistants: going to Cobeen’s dining hall on Monday evenings for Hot Cookie Night.

As the newest residence hall on campus, The Commons draws students with its luxurious dining hall and modern rooms. Adam Romanski, a junior in the College of Health Sciences, says it brings a different experience rather than his first year at Straz Tower. At The Commons, Romanski says there are many inter-floor gatherings that include watch parties for Marquette basketball games. For The Commons to be divided into two towers, Romanski says, the staff there does a great job integrating its students to feel like one community.

Christian Apilan, a residence assistant in Humphrey Hall and junior in the College of Health Sciences, says the culture in Humphrey is inclusive for residents and staff. Though he says it can be tough to integrate the floors, its the regular floor events that helps enhance a great social setting.

Community nights and an ‘open door’ philosophy are what makes Mashuda Hall one of the hot spots to live on campus. Margaret Maguire, a freshman in the College of Arts & Sciences, says she appreciates her floor’s events and that other residents respect one another in a safe and fun way.

Ray Butler, a sophomore in the College of Business Administration, says O’Donnell may receive a bad reputation from those who lived their previously, but it’s one of the ways her and her floor mates bond. Butler says living in O’Donnell provides a community to openly talk about likes and dislikes.

Going on her second year as the residence hall director, Kristina Davilia says community nights are a big highlight, an initiative started last year that allows other students to learn and engage in other communities.

For Straz Tower, it’s only one motto: One staff, One family.