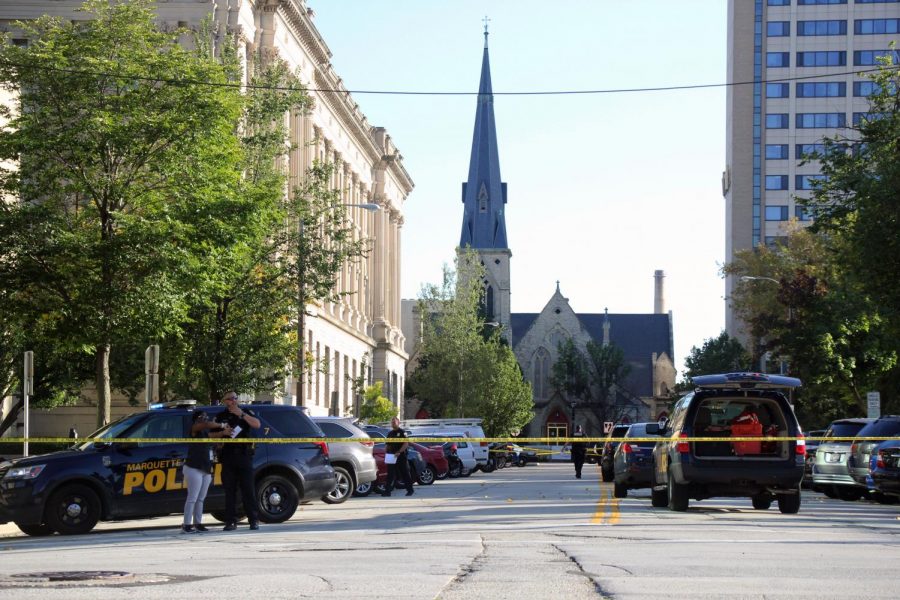 Police vehicles from MUPD, MPD and the Milwaukee County Sheriff's Office were on the scene of Tuesday's shooting.

An unknown suspect shot and injured a 19-year-old non-Marquette-affiliated victim outside the Milwaukee Public Library at about 4 p.m. Tuesday.

Assistant Chief of Marquette University Police Department Jeff Kranz said the suspect fled the scene and is not in custody. He said police do not believe the suspect is in the area of 9th Street and Wisconsin Avenue.

The victim was transported to a local hospital with non life-threatening injuries. The suspect and victim are known to one another and Milwaukee Police Department is currently seeking the suspect, MPD Sgt. Sheronda Grant said.

MPD requests that the public takes alternate routes in the area of the active scene.

MUPD, MPD and the Milwaukee County Sheriff’s Office responded to the situation.

Officials from these agencies do not have all the facts gathered about what happened at the scene, but are currently conducting witness interviews and looking for surveillance camera videos. Kranz said he feels confident they are getting enough evidence to find the suspect.

Kranz said police do not know what kind of weapon was used, but they found gun casings on the scene. It is unknown how many shots were fired.

Marquette students received a safety alert at 4:15 p.m. stating there was a “shooting reported on 9th & Wisconsin.” It said more details will be sent to Marquette emails when available.

Students in Straz Tower were told to go into their rooms and lock their doors around the time of the incident, Gina Marchetti, a sophomore in the College of Arts & Sciences, said.

Marchetti said resident assistants said the building was in lockdown over the hall intercom speaker. She said the lockdown lasted about six minutes, and the text from MUPD was delivered while the hall was still on lockdown.