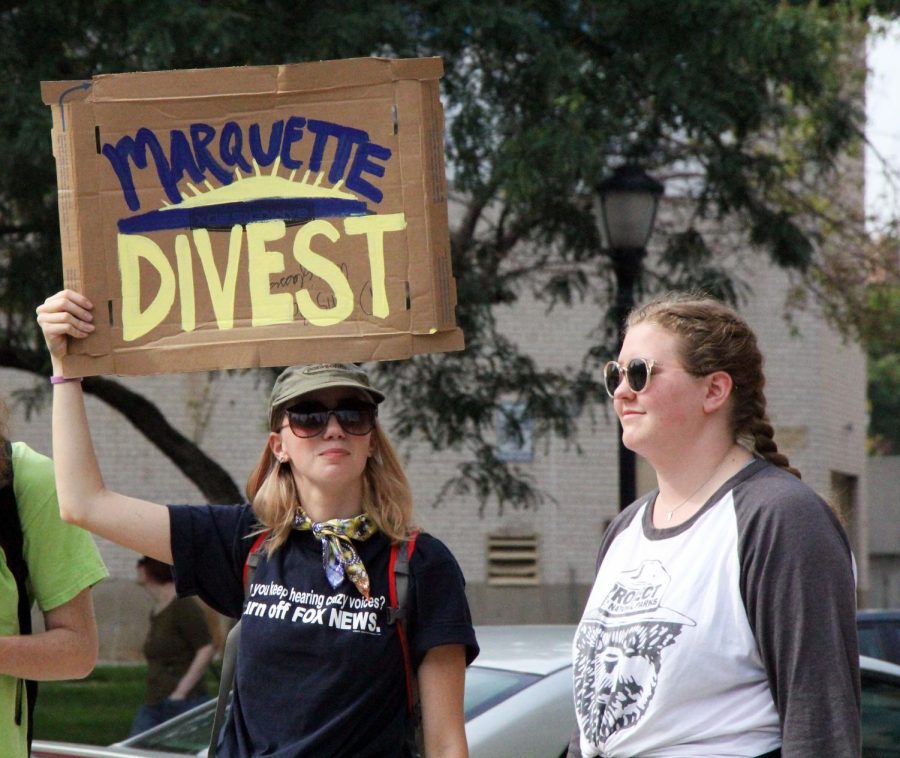 Protestors marched to Zilber Hall to urge Marquette to divest.

For the second time in the past week, the group was heading for Zilber Hall.

While climate strikes large and small took place across the world Friday, the Marquette students held an initial protest outside Zilber Hall. They advocated for climate change awareness and spoke out against Marquette’s demonstration policy and certain university investments.

The students joined the global movement of climate change demonstrations in more than 150 countries, whose messages were in anticipation of a United Nations climate summit that began Monday. The group of students also attended the Milwaukee Climate Strike earlier Friday, congregating at Milwaukee City Hall and marching the three miles to North Point Park before making its way back to campus around 2 p.m.

Once the students reached Zilber Hall, the university’s demonstration policy became a point of protest. The administration are currently revising the policy after unclear wording confused members of the university community. The policy provides guidelines for student, staff and faculty demonstrations on campus.

One of the policy guidelines requires organizers to receive university approval for demonstrations in most campus buildings, including Zilber Hall. Neither Friday’s nor Monday’s student protests adhered to the official process.

The group, determined to deliver a letter of demands to university leaders, entered Zilber Hall without prior approval Friday.

After a desk receptionist told the students no administrators were in the building, the group resolved to return Monday.

When the students entered the hall Monday morning, Catie Petralia, one of the protest organizers and a senior in the College of Arts & Sciences, approached the information desk.

Once again, the receptionist informed the group that both leaders were out of the building. The students waited for 45 minutes in the Zilber Hall lobby before Dean of Students Stephanie Quade came downstairs to meet with them.

“We feel like there’s a severe disconnect between the people in this building and the rest of the campus,” Andrew Himmelberg, a senior in the College of Arts & Sciences, said to Quade. Himmelberg spoke on behalf of the group.

Quade pointed out that the group was in violation of the university’s demonstration policy, and asked the students to move to a “designated area,” specifically the Alumni Memorial Union or a public space.

“We’ve identified spaces on campus for public protest. This space is not one of them,” Quade said to Himmelberg.

After Himmelberg declined to leave the space, saying he did not consent to the policy, Quade said that by choosing to come to Marquette, students agree to abide by all university policies.

Quade cited language from the “Community Expectations” section of the university’s student conduct code in an email to the Marquette Wire.

“When students choose to accept admission to Marquette University, they accept the rights and responsibilities of membership in the university’s academic and social community,” the code reads. “As members of the university community, students are expected to uphold its values by maintaining a high standard of conduct.”

After her initial discussion with students, Quade returned to her office upstairs in Zilber Hall to “have some consultations,” and upon returning, she clarified the demonstration policy to the group.

“The policy is that there are approved spaces for demonstrations. Those include the public spaces in the union, the green spaces in front of the union and any place that’s not owned by the university,” Quade said. “If you want to be here in this building, you have to actually ask me for permission.”

Under the policy, Quade said the group would have to email her the time, place and manner of their proposed demonstration. From there, Quade said she would respond in a reasonable amount of time with an approval or a rejection.

“At this point, I’m going to direct you to leave and to reassemble,” Quade said after explaining the policy. “What I need you to understand is — again, per the policy — is that if you choose not to do that, the possible next steps would be the possibility of the matter being referred for student conduct … or MUPD, so possible citations.”

The group conceded, leaving Zilber Hall at around 1 p.m. Monday.

Before they left, Quade said the group that she delivered the students’ letter of demands to the offices of Lovell and Ah Yun.

The letter asks Marquette to halt its investments in oil extraction and a hedge fund that owns sales tax bonds of Puerto Rico’s debt. The hedge fund, called the Baupost Group, owns $1 billion in the sales tax bonds. Tax documents show the university gained more than $1.2 million in total revenue from its Baupost investments from July 1, 2014, to June 30, 2017.

“We are here today because we believe that Marquette University has failed to uphold its proclaimed Jesuit values, and the values of higher education,” the letter to Marquette administrators reads. “Nonviolent demonstration is an important feature of fighting for a more just world, and the new demonstration policy is in direct contradiction to that principle.”

The letter asks the university to pledge to complete a list of specific actions.

“We ask that the university pledge … to fully divest from dirty investments that contradict the Jesuit mission of Marquette University such as the Baupost group, oil extraction, and coal mining,” the letter says.

Petralia cited the university’s public tax forms as evidence of its investments, saying the university should invest in renewable energy as an alternative.

Group member Liz Regier, a graduate research assistant who attended both protests, said she is fighting climate change for those who are most affected by it.

Maria Bunczak, a senior in the College of Nursing, was at Friday’s protest. She said the university has failed to respond to previous calls for divestment.

Bunczak pointed out that the University of California schools recently divested from fossil fuels.

“(Divesting) is possible, and we want Marquette to follow their Jesuit values,” Bunczak said. “Follow those Jesuit values over capitalist greed, and listen to the students that are attending the university.”

Petralia said the group protested the university’s demonstration policy because it does not foster free speech on campus or promote genuine debate.

Regier echoed Petralia in that she does not approve of the university’s updated demonstration policy, and she added that she does not agree with the university’s process for revising the policy. Ah Yun previously told the Marquette Wire that representatives from the Office of the Provost, the Office of Finance, the Office of General Counsel and the Department of Human Resources reviewed and approved the policy. He said the process ensured “collaboration” and “consistency in university policy development.”

“They didn’t really consult anyone about it outside of their own little circles, and we think that that’s pretty much an attempt for them to not have to listen to us,” Regier said.

Regier said she does not think a demonstration policy is necessary at all, and said the regular code of conduct is sufficient.

The handful of student protestors is not unified under an organization name, but they are considering it moving forward.

“I think we should all agree that this is the start of a bigger movement,” Petralia said.

The group said it will work together to determine their next steps in the coming days.

“We need to get more people involved and more people aware,” Miriam Schwabe, a freshman in the College of Arts & Sciences who attended the protests, said.

Before the students parted ways at the steps of Zilber Hall Monday afternoon, Mary Claire Burkhardt, one of the protest organizers and a senior in the College of Education, said to the group that change does not happen overnight.

“This is going to be a long process,” Burkhardt said. “We’re not done.”

Editor’s note: Andrew Himmelberg previously worked for the Marquette Wire. Himmelberg did not play any role in the reporting of this story.