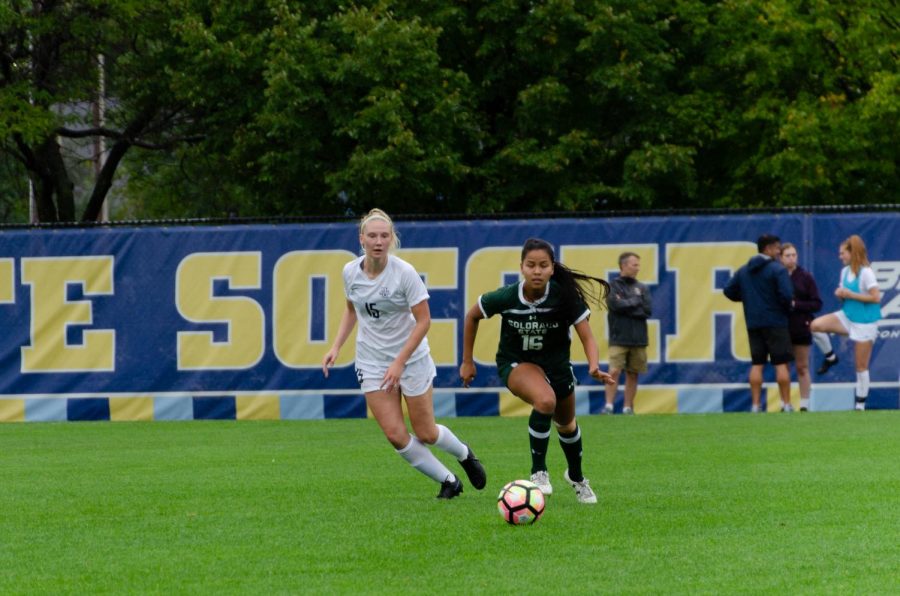 Colorado State jumped to an early lead in the 8th minute when freshman Kristen Noonan scored a header past Marquette senior goalkeeper Maddy Henry. It was off of a cross by Kendra Gibson. The Rams did not score again Sunday.

The lead lasted until the 77th minute. Marquette finally broke through with sophomore Macey Shock’s second goal in a 48-hour period to tie the game at 1-1.

The Golden Eagles scored again 10 minutes later when Alyssa Bombacino put one past the Colorado State’s goalkeeper in the 87th minute to give Marquette a 2-1 lead. Redshirt junior Abby Hess had the assist.

“Abby laid off a really good pass, and I just ran on to it,” Bombacino said. “I had a similar play in the game, but I just missed the shot, so I was really excited that she was able to play it right in front of the goal and I was able to take the shot.”

Marquette had a season-high 19 shots against the Rams and had a 6-0 advantage in corner kicks. Henry collected five saves.

“This was probably our most complete game we’ve had all season,” head coach Markus Roeders said. We started pretty well into the game and then we lost a little grip on the ball, but we responded.”

Marquette already played Colorado State earlier in the season, which resulted in a 2-0 victory for Colorado State. Playing an opponent twice in nonconference play is unusual, but Bombacino said it has its advantages.

“It’s rare that we get to play a team twice, so that was something we were really excited about and we really wanted to win,” Bombacino said.

Marquette (3-6) will now head into BIG EAST play against defending champion Georgetown in Washington, D.C. on Sept. 29. Roeders said he is looking forward to the challenge.

“Hopefully today’s win gives us more confidence,” Roeders said. “We’re excited for (the Georgetown game). We’ve got a full week to build off this and prepare ourselves for next weekend, but (the Colorado State win) was a very important game for us.”