College of Education students meet to discuss future of college 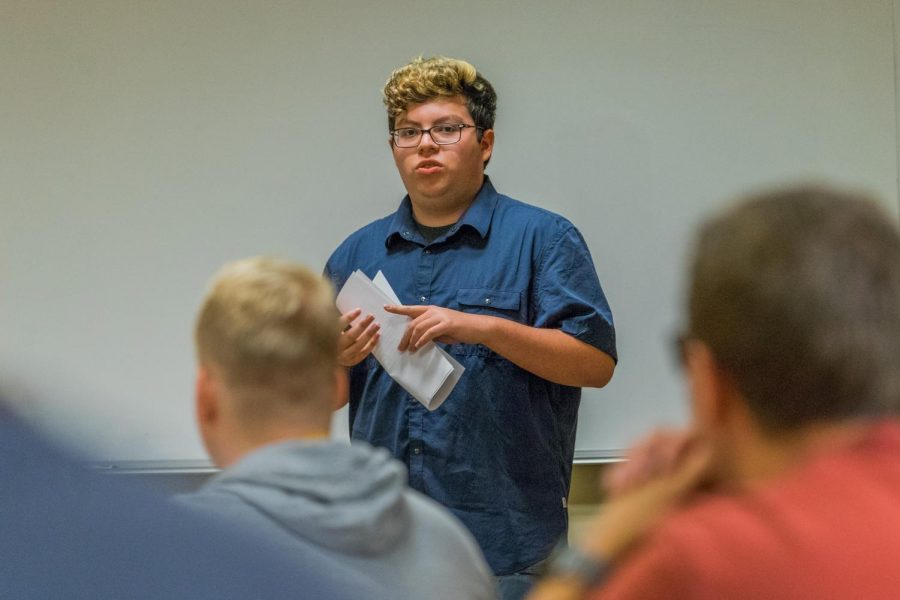 Students in the College of Education met Friday to discuss the future of the college and to take things into their own hands.

Juniors in the College of Education Brooke McArdle and Jonathan Jimenez organized the forum, which they hosted in Schroeder Complex.

Seniors in the College of Education Alyssa Goodwillie and Elizabeth Killian said they received a “cryptic” email the first week of school announcing that “changes are being made (to the college).” They said they also received an email from the dean of the College of Education William Henk, saying the college would do its best to keep students informed.

The emails refer to structural shifts and a possible merge with another college.

“When we heard about this I was really angry,” Jimenez said. “I’m going to do something, I’m not just going to take a slap in the face like this lying down. Brooke was just as angry, if not more angry.”

During the forum, students and faculty discussed some of the inconsistencies among the reasons university administration gave for the restructuring of the college, such as cost management and demographic changes.

Jimenez said he doesn’t agree with the possible changes and believes it doesn’t make sense for the university “in any capacity.”

“All the justifications brought by the administration equally don’t make sense,” Jimenez said. “If it did make sense for us to be downgraded to a school, to a department, I think that’s one thing, but there is no benefit here to not be a College of Education, affecting students, staff and faculty negatively. I think it actually affects the reputation of Marquette if they were to go through with this.”

Students said that while the university claimed nothing would change if the College of Education became a school rather than a college, many students expressed their disagreement.

“I don’t necessarily believe that if we become a school our programs will stay the same,” Killian said.

The group discussed the $1 million deficit the university informed the College of Education faculty of in a Sept. 13 meeting. The students talked about not only discrepancies in the numbers but also how cutting the college would not end up paying for the deficit.

Some students suggested allocating for the college instead, as the college is not endowed the way the Colleges of Communication or Business Administration are.

Some of the students voiced their concerns regarding their ability to double major or to complete their degrees in four years. McArdle said she is able to triple major and minor in four years because the College of Education is its own college.

Many students also said eliminating the college would go against Jesuit values.

“The Jesuits and St. Ignatius were founded off of a cornerstone of education. Education is one of the major standpoints that a Jesuit takes,” Killian said. “We can’t just take it away if it’s part of our foundation.”

Others mentioned the possible effects on Marquette’s relationship with the Milwaukee community. The College of Education has connections with Milwaukee Public Schools and the Hartman Literacy and Learning Center which provides tutoring Milwaukee children.

After the forum, the Dean of the College of Education William Henk told the Marquette Wire the Hartman Center is endowed, and will not be affected.

Most of all, those in attendance talked about the loss of identity they would feel if the college was absorbed by the College of Arts & Sciences or Communication.

Killian said it would be strange to say she is a part of the College of Arts & Sciences or Communication, because it is not what she is passionate about.

Goodwillie said the College of Education formed her into the person she is today.

Goodwillie said the relationships formed among education majors is special, something she said other people don’t have. She said being able to take so many classes with other education majors has allowed her to meet some of her best friends.

“I know this might not affect us right now but our experience at Marquette and the College of Education would look tremendously different,” she said.

Jimenez said he doesn’t think he would have as many friends or professional connections without the College of Education.

“There really is an identity of being a student of the College of Education, and I take solace in the fact that other students go through as many highs as I do but also as many lows,” Jimenez said. “We are such a unique program, in how it really sets us up to be future leaders and teachers of America and across the world, and so if this wasn’t like this in the first place, I don’t think I would’ve looked here, truth be told.”

Students also talked about how the loss of the college might affect their job opportunities in the future.

“It’s just so sad to know that I worked so hard for this degree,” Killian said. “If I go to apply for a job and they look back and say ‘This place doesn’t exist,’ the credibility must go down. And even if it doesn’t, there is an implicit bias that you might have … that ‘Oh, you went here and now it doesn’t exist, that means it can’t be good.’ But my education was so good here.”

“It may not directly affect the way employers see my degree,” Jimenez said, “(but) this would devalue (my degree) because I couldn’t take pride in Marquette, knowing they did this to all of us.”