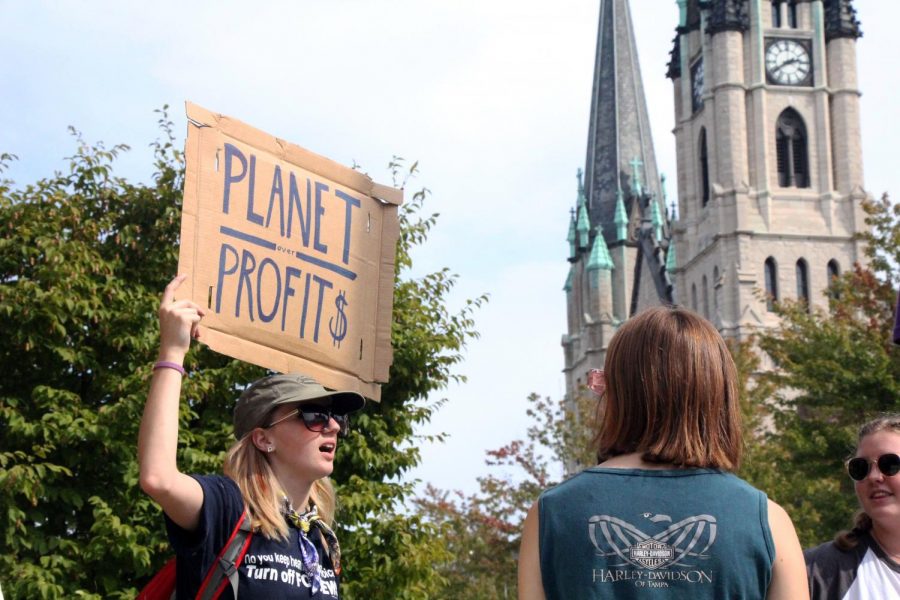 Catie Petralia, a senior in the College of Arts & Sciences, holds a sign Friday outside Zilber Hall to raise awareness about climate change.

While climate strikes large and small took place across the world today, Marquette students walked along Wisconsin Avenue, holding their own protest outside Zilber Hall.

The students joined the movement of protesters in more than 150 countries, whose messages are in anticipation of a United Nations climate summit Monday. The group of about 15 students also attended Milwaukee Climate Strike earlier in the day, congregating at City Hall and marching to North Point Park before making its way back to campus around 2 p.m.

One of the policy guidelines requires organizers to receive university approval for demonstrations in most campus buildings, including Zilber Hall. Friday’s student protestors did not partake in the official process.

The group of students, determined to deliver a letter of demands to university leaders, exited the public sidewalk and entered Zilber Hall around 3 p.m. They asked a Zilber Hall desk receptionist to see University President Michael Lovell, and when told he was not in the building, they asked to see acting provost Kimo Ah Yun. The students were then told no administrators were still in the building.

Mary Claire Burkhardt, one of the protest organizers and a senior in the College of Education, said the group will return Monday to deliver the letter.

The letter asks Marquette to halt its investments in oil extraction and a hedge fund that owns sales tax bonds of Puerto Rico’s debt. The hedge fund, called the Baupost Group, owns $1 billion in the sales tax bonds. Tax documents show the university gained more than $1.2 million in total revenue from its Baupost investments from July 1, 2014, to June 30, 2017.

Petralia said the university should invest in renewable energy as an alternative.

Group member Liz Regier, a graduate research assistant, said she is fighting climate change for those who are most affected by it.

Maria Bunczak, a senior in the College of Nursing, said the university has failed to respond to previous calls for divestment.

Bunczak pointed out that the University of California system recently divested from fossil fuels.

“(Divesting) is possible, and we want Marquette to follow their Jesuit values,” Bunczak said. “Follow those Jesuit values over capitalist greed, and listen to the students that are attending the university.”

Petralia said the group protested the university’s demonstration policy because it does not foster free speech on campus or promote genuine debate.

Regier echoed Petralia in that she does not approve of the university’s updated demonstration policy, and she added that she does not agree with the university’s process for revising the policy. Ah Yun previously told the Marquette Wire that representatives from the Office of the Provost, the Office of Finance, the Office of General Counsel and the Department of Human Resources reviewed and approved the policy. He said the process ensured “collaboration” and “consistency in university policy development.”

“They didn’t really consult anyone about it outside of their own little circles, and we think that that’s pretty much an attempt for them to not have to listen to us,” Regier said.

Regier said she does not think a demonstration policy is necessary at all and said the regular code of conduct is sufficient.

Regier also participated in unionization efforts that took place on campus last spring. She said she thinks those efforts played a significant role in the demonstration policy being altered this summer, although the university has said otherwise. The university’s previous demonstration policy applied to students, but the updated policy also applies to faculty and staff. University officials said the update was to standardize its expectations for members of the campus community.

“The big promise that I see in unions, and I think the reason why they’re trying to shut it down so much, is because unions actually hold administrations accountable by having contracts that we negotiate,” Regier said.