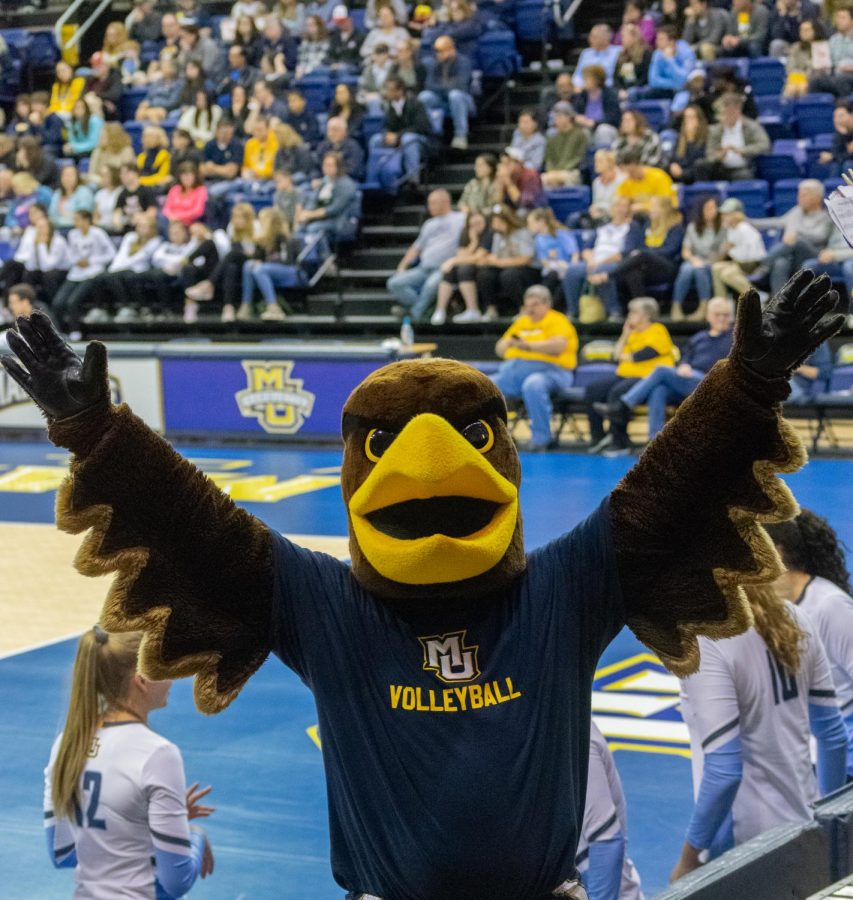 The mascot cheers at a women's volleyball game.

For many students, home game days consist of dropping everything, forgetting about homework, and dressing up in blue and gold before heading to Valley Fields, Al McGuire Center or Fiserv Forum.

“Honestly, the minute we wake up, (the excitement) is always what we think about,” senior men’s soccer midfielder Luka Prpa says.

Both soccer teams typically eat three and a half hours before kickoff. While the women’s team caters food on campus, the men’s team provides the same pregame meal every time: chicken, a fast carb like pasta or a potato, some vegetables and plain spaghetti.

“The dessert for them is the game plan,” men’s soccer head coach Louis Bennett points out. “They’ll think about that, and they’ll slowly get changed and ready to go.”

About 90 minutes before the game, the women’s team finishes off with the last pregame talk in the Marquette Gymnasium locker room.

“Sometimes you hear music in the back,” women’s soccer head coach Markus Roeder explains. “We just try to refocus ourselves one more time about (the) game in hand, any highlights that we want to point out one more time.”

“I like to usually dance with my teammates before in the locker room,” senior women’s soccer defender Emily Hess says. “Get a little hype and some music in there.”

Next the teams take shuttles down to Valley Fields about an hour prior to kickoff, when Bennett has his team repeat pertinent points of the game plan back to him.

Forty-five minutes before kickoff, teams take the field for warmups.

When warmups start 45 minutes before kickoff, the men’s soccer goalkeepers get loose together and substitutes practice together while the starters work with coaches.

In Roeders’ case, his team warms up together without a ball and then with a ball. His starters work on various possession drills depending on a player’s position.

During the national anthem, Roeders’ squad all holds onto a rope.

“It’s been a traditional thing for many years now. It just brings us together one more time,” Roeders says. “We’re all pulling on the same thing, and then it’s almost kickoff time.”

Every time senior goalkeeper Maddy Henry hears her name announced and walks onto the field, she gets chills.

“I thought it would become a normal (feeling) throughout the four years, but it just keeps getting more and more (exciting),” Henry explains. “We do our walkouts and high five everyone and clap. It will never get old. It is the coolest feeling in the entire world.”

Bennett will never walk out onto the field before his players. While he used to have a special tie for game days, he is trying to get rid of superstitions.

Meanwhile, Roeders has many habits, like taking a walk around campus from the Marquette Gym to the Joan of Arc chapel before games and always wearing shorts.

“I’ve always been known for wearing shorts, no matter what the weather is,” Roeders discloses. “The most important thing is actually the players. … They’ve got to feel comfortable.”

Superstitions and habits vary from how the players put on their uniforms to which vans they take.

“I always put my shoes and socks, the left one always goes first just because I’m left footed,” Prpa describes.

“After that, I’ll drink two to three full Gatorade bottles,” Seagrist says. “I’ll tape both my wrists, and then I’ll always put on my right shoe before my left.”

Henry’s pregame routine, as well as stretching, consists of doing her hair and makeup, listening to music, eating particular foods and trying to “vibe out and get zen.”

“I’ve worn the same headband and done my hair the same since freshman year,” Henry illustrates. “I always listen to the same five songs in a row before the game. I don’t do anything weird with my shoes which is funky, but I will always chew a piece of gum before and after warmups. … I always pray like 20 times before a game.”

Hess says she also leaves her shoes untied until she gets on the field.

“Just lacing up and tying them there is more so like ‘We’re here, on the field now, let’s go,’” Hess describes.

Similar to the soccer teams, women’s volleyball also has a specific routine before a game at the Al. For a Saturday night game, the routine includes a morning video session, a 45-minute serve and pass walkthrough practice with downtime from 12 to 3 p.m. The athletes come back for a pregame meal around 3:30 p.m. before getting treatment with trainers.

With more downtime in the locker room, the Golden Eagles sign the balls they throw to the audience and play the team song, which changes every year. An hour before the match, junior libero Martha Konovodoff works with her strobe glasses while setters have their own practice.

“Coaches go into the locker room 45 minutes before the match, and then 40 minutes to match time they’re doing their prep stuff on the court,” women’s volleyball head coach Ryan Theis explains.

Though Theis is against superstitions, Konovodoff says her passing pads always have to be loose and on the same side.

“I always make sure that they’re not too new before I put them on,” Konovodoff says. “Home games, for sure my hair has to be perfectly put up.”

After the national anthem and lineup announcements, each player throws a signed volleyball to fans.

“I just lift my hand up, and I don’t even know if I smile. I just look up and try not to hit anyone with my ball,” Konovodoff says with a smile. “It’s just that quick reminder of gratefulness, and you continue to do what you do.”

While athletes see game days one way, managers and fans see it a different way.

Junior Quinn Faeth has been a women’s basketball student manager since his sophomore year, which means he helps more behind-the-scenes.

For a 7 p.m. game, Faeth helps with an 11 a.m. shoot around. At around 3 p.m., the four managers set up towels around each bench and in the visiting team’s locker room. When they finished all that, there is a pregame meal, which Maggianos usually caters.

“I probably go down to the court about an hour and fifteen minutes before the game to change, kind of get ready and do some last-minute stuff just to kind of wrap up,” Faeth says.

During the team’s warmup, Faeth and the other managers rebound for them, pass the balls to them and do whatever the players need.

For superfans like junior Nathan Marzion, game days consist of waiting outside of Fiserv Forum an hour to an hour and a half before the doors open, even on days with below zero temperatures to sit in the front row.

Growing up in nearby Muskego, Wisconsin, Marzion has been going to MU games since he was seven years old and started sitting in the student section in high school after acquiring tickets via Facebook.

“You feel like you’re kind of in the center of it all and helping the team,” Marzion says. “It feels good to be the leaders of that and be the ones to really get the whole student section going.”

For Marquette pep band members, their game day routine begins with call time at Varsity Theater about two hours prior to tipoff to get their instruments set up before taking a bus to Fiserv Forum with the cheer and dance teams.

Fifth-year student and saxophone player Connor Skelton memorizes the music after performing it for four years while still having fun.

“With pep band, you’re able to go all out and be loud and not worry about concert tone,” Skelton describes. “It’s more than just playing. We’re also kind of super fans.”

Whether it is a fan, a pep band member, a player or a coach, there’s just something about home game days that gets everyone excited.

“It’s just the level of comfort of that you have that 12th man behind you,” Roeders exclaims. “It could be a big crowd, it could be a small crowd, but you still have it. It’s your home.”