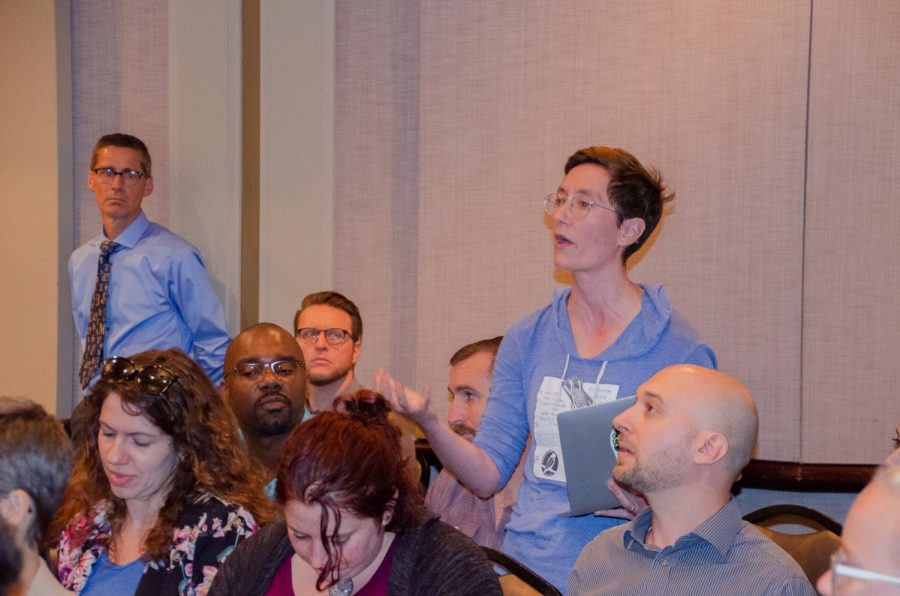 Copies of the drafted demonstration policy, created Sept. 9, were provided for university senate members as well as guests. The effective date is not yet released.

Sumana Chattopadhyay, associate professor of digital media and performing arts/media studies and chair of University Academic Senate, said the Office of the Provost, Office of Human Relations, General Counsel, Office of Student Affairs and Academic Senate executives were consulted during the drafting process.

These changes would be the third update to the original UPP 6-11 Demonstration Policy effective Aug. 16. Minor wording changes were made Aug. 27 and then not openly communicated with the university community.

“Moving forward, clearly we are working on how to make (the policy) better,” acting provost Kimo Ah Yun said.

The proposed changes included multiple paragraphs added to the introduction, stating the university’s desire to seek a balance between “two sets of rights that are brought into conflict with each other.”

The  document refers to the rights of university members to pursue their academic and vocational objectives without hindrance, and the right of the university community to demonstrate regarding vital issues.

An additional proposed change in the document is university members’ ability to have events in public spaces of the Alumni Memorial Union and its adjacent green spaces, on Central Mall and on public property without approval from the university.

The current policy only allows demonstrations without prior approval in the AMU and adjacent green spaces.

However, the Marquette Wire previously spoke with several attorneys who said the requirements outlined in the Aug. 16 demonstration policy equate to needing permission in the AMU.

Changes also include a statement regarding volume of noise and the prohibited use of amplified sound being removed.

Wording changes were also made, including words such as “disruptive” and “peaceful.” The proposed changes in wording were “prohibited” and “permitted,” respectively.

The academic senate meeting did not reach a conclusion and Ah Yun said this policy discussion will continue in following meetings.

Some faculty mentioned at the meeting that the policy seems unnecessary due to other policies Marquette has.

“As many of my faculty colleagues mentioned, the demonstration policy seems superfluous,” Phillip Rocco, an assistant professor of political science, said. “There are already policies on the books at Marquette about safety. It doesn’t make sense to call out speech that is something that needs to be regulated.”

“There are existing policies that already cover these issues,” Mulla said.

At the meeting, multiple faculty members brought up concerns regarding the lack of transparency when the original documents were made and changed.

“We try to be as transparent as possible in conversations that we have,” Ah Yun said.

The policy prompted the question of whether or not specific policies should be discussed with the Academic Senate, despite not being under their control.

“When this policy happened, the email I got from a lot of faculty (was) why faculty did not hear about this,” Chattopadhyay said. “We don’t have, in the current senate statutes or bylaws, control over this type of policy.”

Faculty also voiced concerns about shared governance, which refers to changes in the university being discussed at multiple levels of university faculty and staff.

Chattopadhyay said shared governance will continue to be discussed in upcoming meetings.

She said she encourages faculty to reach out if they have recommendations regarding the policy changes following the meeting.

Mulla said she thinks conversations like the ones at the Academic Senate are important to have, though they can be awkward at times.

“I think the chair of the Academic Senate is doing a great job in seeking info and clarifying what some of the decision making has been,” Mulla said.

The issue will continue to be discussed at the following Senate meeting Oct. 21.