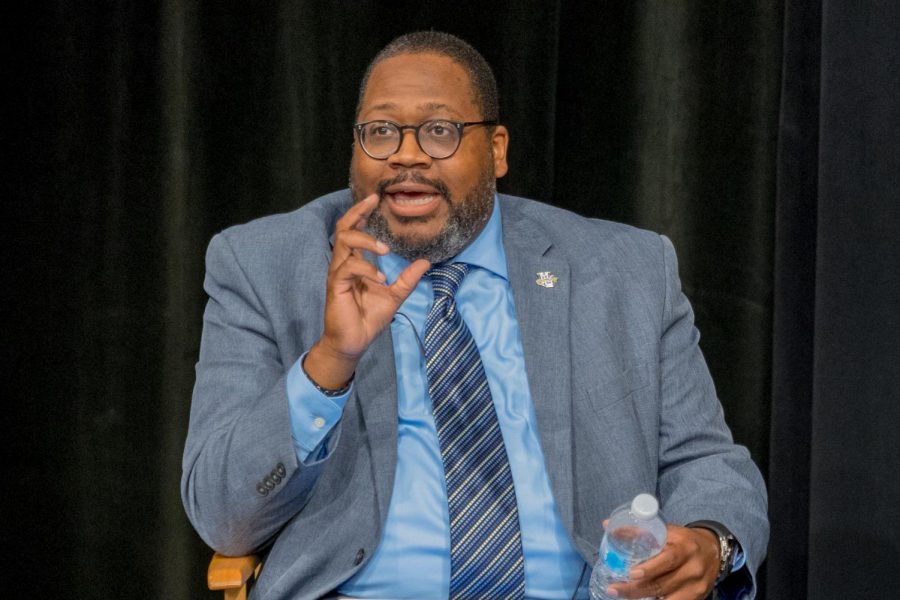 Vice president of Student Affairs Xavier Cole speaks about the new Office of Engagement and Inclusion at the Aug. 20 news conference.

The CEI provides resources for minority and underrepresented students on campus, the LGBTQ+ Resource Center provides a supportive and inclusive space for LGBTQ students, faculty and staff, and Campus Activities and Student Involvement provides programming such as Greek Life.

“How do we take our largest areas for engagement, campus activities and Greek Life, and fuse it with diversity? How do we take an area in the Center for Intercultural Engagement that had been previously siloed — Who goes in there? Who’s invited? Who’s this space for? — and mix it back in with our majority population?” Cole said at the news conference.

He said the philosophy of the new office is to infuse diversity throughout engagement for all Marquette students.

The university should be commended for focusing on cultural competency among students. Integrating diversity into all aspects of Marquette is essential for social awareness and engagement.

However, the move to combine the CEI and the LGBTQ+ Resource Center with Student Involvement, Activities and Greek Life shifts priority away from the minority students who use those spaces and instead caters toward Marquette’s majority population.

These changes were implemented without involving students in the process.

In addition, the combination of offices into one new office resulted in a reduction to staffing.

However, there is now only one staff member listed on the center’s website: a graduate assistant.

With the university’s concern for student retention and increased enrollment, it is difficult to understand understand why cuts were made in this area of student resources.

On Sept. 5, University President Michael Lovell sent a letter to Marquette faculty and staff, informing them that 24 employees would be terminated due to a cost management review.

Lovell also mentioned in the letter that the Office of Engagement and Inclusion was developed to increase efficiency in light of the cost management review.

The primary reason for the change is unclear, despite the Marquette Wire’s questions to the administration for clarification.

The university needs to be transparent about whether the primary reason behind the change was mainly for leadership and unity or for cost management.

The university should be creating more spaces for students, not combining them under the leadership of fewer staff.

On a campus that is predominantly white and heterosexual, the CEI and the LGBTQ+ Resources Center are dedicated safe spaces for minority students. These spaces should continue to receive the university’s utmost dedication and resources.

The university should have conversations with students before instituting structural or philosophical changes, and it should be upfront with its reasons for implementing changes.