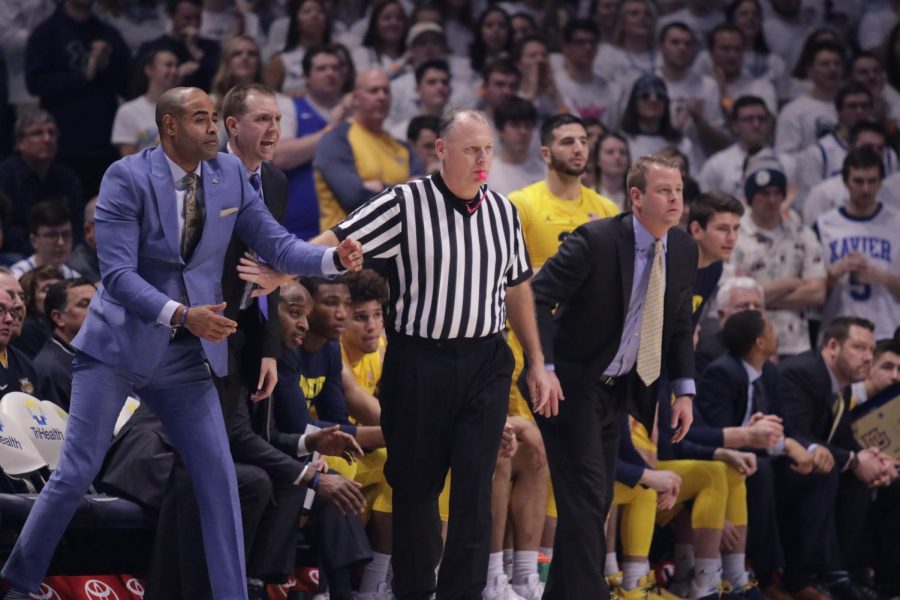 Steve Wojciechowski with coaching staff during the Xavier game in 2018.

As the Golden Eagles prepare for the 2020 season, the coaching staff has a longer-term challenge: how to replace two of the team’s three scholarship post players and the BIG EAST Player of the Year after this season.

With guards Markus Howard and Sacar Anim and post players Ed Morrow and Jayce Johnson set to graduate after the 2019-’20 season, the 2020 recruiting class is set to play a pivotal role in Marquette men’s basketball’s long-term outlook beyond this year.

Here’s a breakdown of the some of the recruiting targets to whom Marquette has offered scholarships in the 2020 recruiting class:
COMMITTED:
JUSTIN LEWIS — Lewis, Marquette’s first commitment of the 2020 recruiting class, will help replace Johnson and Morrow. The 6-foot-7 prospect is the third post player ranked in the top 80 of 247Sports’ rankings to commit to the Golden Eagles during the Wojciechowski era.

He chose the Golden Eagles over a litany of high-major programs on the east coast. Virginia Tech, Ohio State, Maryland, Seton Hall and UConn are among schools he passed on. The Towson, Maryland native grew up less than an hour away from where Wojciechowski grew up.

The 6-foot-9 power forward is 74th in 247Sports’ rankings for his class and 11th among power forwards. He is the second player from Arizona to don blue and gold since Wojciechowski took over in 2014. The first, Markus Howard, won BIG EAST Player of the Year last year.
OFFICIAL VISITS SCHEDULED OR TAKEN TO MARQUETTE:
ZED KEY — Key, a 6-foot-8 power forward from Glen Head, New York, is also slated to take an official visit this weekend to MU, per Zagoria. Key told Zagoria he has built a relationship with assistant coach Dwayne Killings, who had an especially important role in bringing freshman guard Symir Torrence to MU.

Davis will visit Marquette Sept. 27 and 28 in the second of three official visits, per Pat Lawless of Prep Circuit. He visits Pittsburgh this weekend and North Carolina in October. He visited Georgetown in late June.

A.J. HOGGARD — Hoggard, to whom MU gave an offer in April, was one of MU’s first contacts in the 2020 recruiting class. 247Sports ranks him 71st in the country and second among prospects in Michigan.

His official visit to the Golden Eagles will start Tuesday, per Prep Hoops’ Colby Giacubeno. He has visited Providence, Ole Miss and Michigan State and will visit Florida this weekend.

The Golden Eagles are one of three schools to have an official visit complete or scheduled with the 6-foot-11 center from Prior Lake, Minnesota, per 247Sports’ database.

Sibley left nearby Nicolet High School this summer to play at Oak Hill Academy, a school in Virginia with a track record for producing NBA talent. 247Sports ranked him as the number one prospect in Wisconsin.

ISAIAH JACKSON — Jackson is one of the more highly touted Marquette targets in the 2020 class. ESPN ranks him 32nd in the nation, and 247Sports has him 25th in the nation. He boasts offers from Kentucky, Michigan State, Syracuse and Indiana, among others.

The Golden Eagles offered him a scholarship in July 2017, which was his third scholarship offer at the time. Now he has more than 20 offers.

JALEN SUGGS — Suggs, the 10th-best player in 247Sports’ rankings, outlined Marquette as one of his three frontrunners in June, per Jacob Polacheck of ZagsBlog. He would be the highest-ranked commitment for Wojciechowski since Henry Ellenson chose the Golden Eagles as part of the 2015 recruiting class.

DESMOND POLK — Polk has had an offer from Marquette since last September and ranks 264th in 247Sports’ system. He also holds offers from Iowa, Kansas State, Minnesota and DePaul.

Polk has played summer travel basketball with fellow Marquette targets Sibley and Pat Baldwin, Jr. He hails from nearby New Berlin but has played the last year at La Lumiere School in La Porte, Indiana.

TAELON MARTIN — Martin is outside the top 300 of 247Sports’ rankings but holds offers from Marquette, UConn, Penn State, Syracuse and Virginia Tech. He is taking an extra year to play for Hall of Fame coach Jim Calhoun at University of St. Joseph before starting his college eligibility.

DARLINSTONE DUBAR — Like Martin, Dubar has yet to see his stock rise on many prominent recruiting sites but has a handful of high-major options. Marquette, Auburn, Kansas State and VCU have made offers to the 6-foot-4 shooting guard.

LYNN GREER III — Greer, who 247Sports ranks 217th nationally, picked up an offer from the Golden Eagles on the first day NCAA rules permitted the Golden Eagles to do so, per Lawless. However, Greer has not mentioned Marquette in recent interviews with Prep Circuit and ZagsBlog.

ZACH LOVEDAY — Loveday, a 6-foot-11 center, has had an offer from Marquette since May, but the Golden Eagles were not among his first three official visits. He has already gone on or will go on official visits to Louisville, Ohio State and Baylor, leaving him with just two official visits remaining, because each player only gets five.

He goes to the same high school as Hoggard and Blackwell. 247Sports ranks the 7-footer 119th in the class.

This story was updated following Coleman Hawkins’ decision to part ways with Marquette after the commitment of Osasere Ighodaro, as reported by IlliniPulse.com.