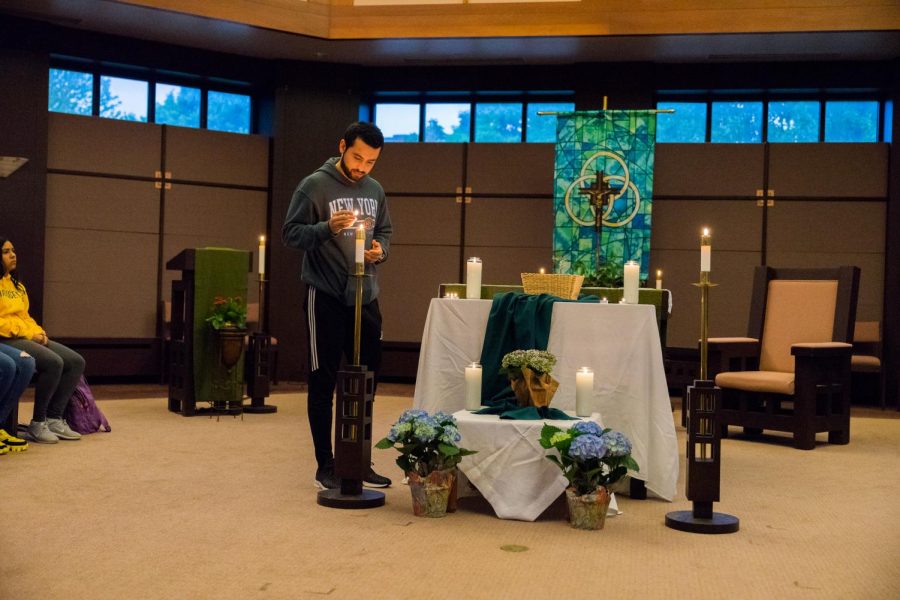 About one dozen students gathered for a prayer circle for the people of the Bahamas affected by Hurricane Dorian last week in the Chapel of the Holy Family.

Hurricane Dorian made landfall in the Bahamas Sept. 1. The Category five storm hit the Abaco Islands and Grand Bahama, leaving about 70,000 people homeless, according to CNN. Officials said they expect the death toll, now approximately 50, to rise immensely.

Senior in the College of Health Sciences and president of the Caribbean Islander Student Organization Ian Soto helped organize the prayer circle with Campus Ministry upon hearing of the damage Dorian caused. He was the first student to speak at the event, and he offered support to any Marquette student whose family the hurricane may have affected.

“Even though we cannot understand exactly what they are going through and their struggles, the least we can do is walk with them and be here for them as much as we can,” Soto said.

For others in attendance, the prayer circle felt familiar.

“In a certain way, this is something we already have gone through a couple years ago with Hurricane Maria,” Bernardo Avila-Borunda, a Campus Ministry staff member, said.

Many students who attended are from Puerto Rico, and Avila-Borunda said he hoped the event prayer circle could also serve as an experience of healing for them.

One by one, students approached the chapel’s altar, offered their prayers aloud and lit a candle. Many spoke in their native Spanish language.

Fhernam Batiz, a junior in the College of Engineering, recalled when he was a freshman at Marquette and Hurricane Maria hit his home town in October of 2017.

“I couldn’t communicate with my family for almost a month,” he said. “I know the struggle of not knowing if your family is safe or alive.”

Now almost three years later, speaking at the prayer circle, he said he has seen how hard it is to rebuild a country. Still, his prayer held hope.

“We are not there, but I know our prayers will reach the people that can actually do something to help them,” he said.

Students shared their prayers for the safety of those the storm displaced from their homes. One student said he hopes government would not allow greed to get in the way of the reconstruction of the country as he had seen in the rebuilding of Hurricane Maria.

Avila-Borunda also focused the evening’s prayer on “asking God for protection” of all the Pacific Islands and coastal states and cities in the Americas during hurricane season, which refers to the higher concentration of tropical storms that occurs from June to November.

Over the weekend, Tropical Storm Humberto missed areas of the Bahamas hit by Hurricane Dorian, according to the National Hurricane Center. The center said the tropical storm was expected to become a hurricane Sunday, making its way towards Florida.

Milwaukee is far from the storms, but Avila-Borunda said there is one thing all Marquette students can do to help.

“Presence is a great way of showing support,” he said. “Just being there to listen when these types of events are happening is important.”

The students concluded the prayer vigil reciting Padre Nuestro, the Our Father prayer. Avila-Borunda then invited the students to share their final thoughts.

“There is strength in unity,” Soto said. “It’s a lot easier to go through something hard when you know there’s people around you that will be there every step of the way.”