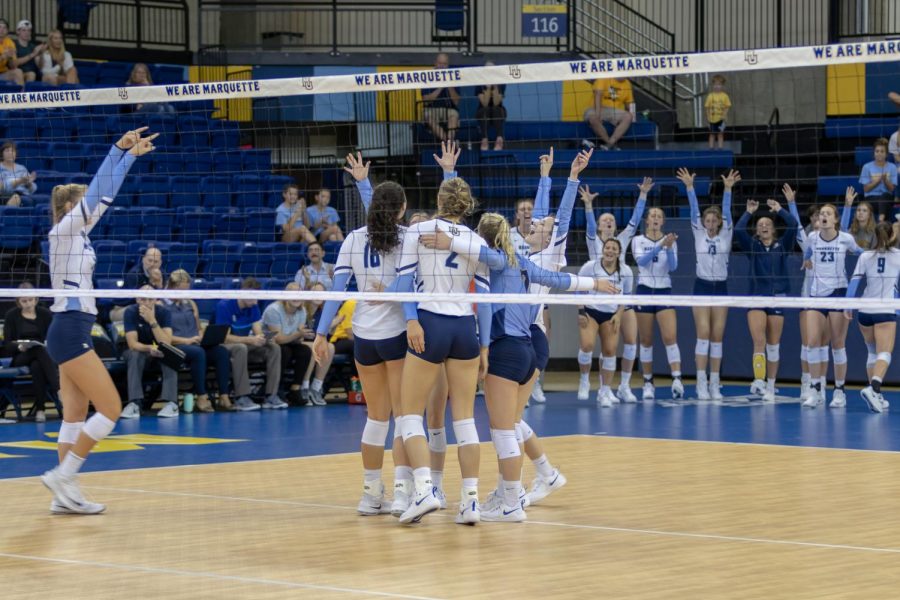 Marquette celebrates a point in its win against Syracuse Sept. 7.

Marquette took an 11-6 lead in the first set and never relinquished the advantage, eventually winning the set 25-21 on a kill from freshman Hannah Vanden Berg. The Golden Eagles hit at a .432 clip in the set.

Marquette then struggled in the second and third frames. A match-high six blocks for Illinois State helped the Redbirds win the set 25-18 without ever giving up the lead. Marquette could not regain momentum in the third, hitting at a -.054 clip.

In the fourth frame, the Golden Eagles hopped to a 6-1 lead. Even though the Redbirds fought back to tie the set at 8-8, Marquette took a commanding 20-14 lead to eventually win 25-16 and push the match into a deciding set.

The Golden Eagles suffered 11 service errors in the match, including three in the fifth set.

Senior Lauren Speckman ended with the only double-double for the Golden Eagles, dishing out 29 assists and adding 14 digs. Junior libero Martha Konovodoff recorded 12 digs, and junior outside hitter Hope Werch had 15.

Konovodoff was the MVP of the Redbird Classic, while Barber and Werch made the All-Tournament Team.

No. 7 Marquette (7-2) will play host to University of Wisconsin-Green Bay, Saint Louis University and University of Northern Iowa in the Hyatt Regency Marquette Invitational next weekend. Tipoff against Green Bay is Friday at 7 p.m.