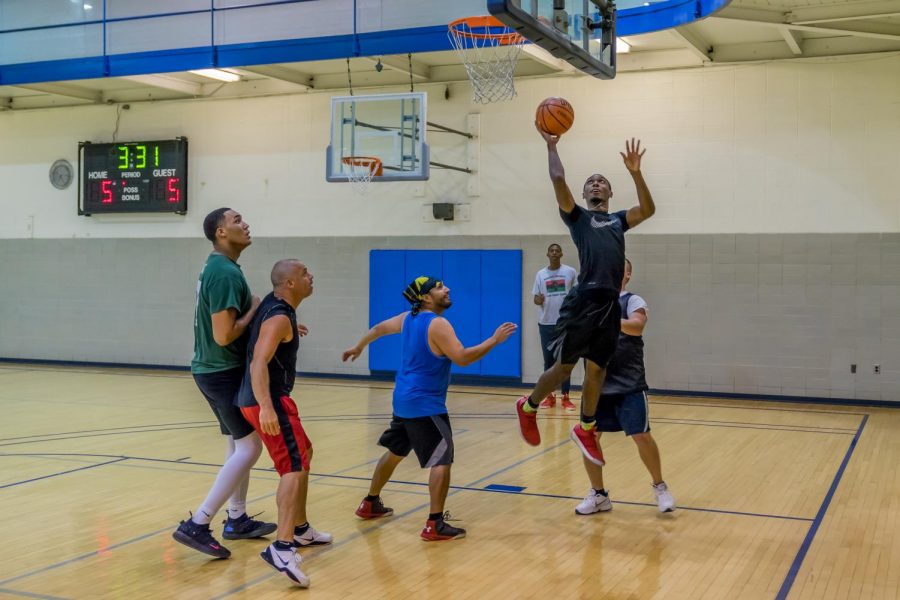 A player attempts a layup as the opposing team anticipates a rebound.

Marquette students and local law enforcement gathered Friday at the Rec Plex to share one thing they had in common: a love for basketball. The Black Student Council hosted the first ever 3-on-3 basketball tournament for the community featuring teams from BSC, the Marquette University Police Department and the Milwaukee Police Department.

The tournament consisted of two MUPD teams, two MPD teams and four student teams all battling in a single-elimination tournament for the trophy. Each game had two six-minute halves, with the winners advancing and getting one step closer to the championship game. The match-ups were evenly mixed so that student teams, MUPD and MPD teams could all have a chance to face one another.

The tournament charged a $4 entry fee for teams and a $3 entry fee for spectators and sold concessions. It donated a portion of the proceeds to Milwaukee Public Schools.

Breanna Flowers, a sophomore in the College of Arts & Sciences and president of BSC, said she hopes the basketball tournament will help close the gap between Marquette students and MUPD.

“Sometimes there’s a disconnect, so we are trying to help build a bridge between our members and MUPD,” Flowers said.

MUPD Capt. Ruth Peterson said she saw this as a great event for not only the students but also for the officers of MUPD and MPD.

“It was the perfect opportunity to … allow (students) to see our officers in regular clothes — not (uniforms) — to better improve on relationships.”

After a few hard-fought games, MUPD and MPD teams were all knocked out of the tournament. The Young Bucks, a student team, prevailed and captured the trophy.

Lazabia Jackson, a sophomore in the College of Communication and BSC vice president, said this event is part of a larger campaign. BSC is working on a campaign called “Just Say What’s Up,” a project that encourages students on campus to reach out to people they don’t know.

It began with an online video campaign featuring black faculty and black students from Marquette telling people to just greet them if they ever run into them on campus. According to the video description, the goal of BSC and the project is to “make a change, highlight our culture and create an environment where black students can thrive and flourish. Most importantly (BSC emphasizes) creating positive synergy in the Marquette and Milwaukee community.”

Jackson said he is excited for the campaign and future events.

“We want to bring out everybody, not just the black students,” Jackson said.

Even though the tournament is over, Flowers said she hopes the event made a lasting impact and students will see police in a more friendly light.

“I think (the Marquette community) will feel better about being in contact with the police. … It won’t be as much of a fear thing anymore,” Flowers said. “For the students, it’ll be something to say, like, ‘Hey, they’re still people. We can still approach them and talk to them. They’re here just as we are.’”

Peterson said while there are currently no more events in which MUPD will collaborate with BSC just yet, she said she looks forward to more collaborations in the future with more student organizations.

MUPD Officer Tom Wichgers said he was happy to be included in the event.

“We have some guys excited about an opportunity to engage with the students,” Wichgers said. “We want more of these opportunities, so we were really glad that they reached out to start this.”

To learn more about the “Just Say What’s Up” campaign and future events for BSC, students can visit BSCofMU.org or find the organization on Facebook, Twitter or Instagram @BSCofMU. Students can find out more about MUPD and its upcoming events on Twitter @MarquettePD.