BEG: Public figures should uplift, not silence voices of women of color 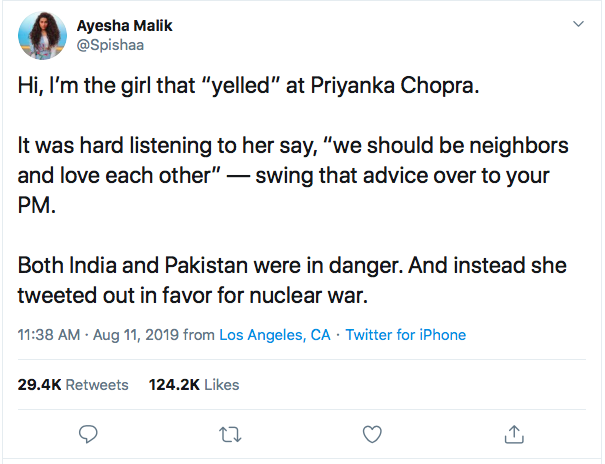 Malik speaks about her encounter with Chopra after BeautyCon event. Photo via Twitter.

On the weekend of Aug. 10, BeautyCon was held at the Los Angeles Convention Center. It is a highly popular and extensive event where various beauty influencers, brand representatives and prevalent celebrities come to speak or hold panels. This year, Priyanka Chopra, an Indian actress, held a panel where she took questions from the audience about her beauty choices and lifestyle.

Ayesha Malik, a Pakistani, stepped forward and took the microphone. Instead of asking a question, Malik called Chopra out for her recent tweet and voiced her frustrations about Chopra’s recent actions that hurt many Pakistanis. In February of this year, Chopra tweeted “Jai Hind #IndianArmedForces,” meaning “Hail India.”

This tweet came at an especially sensitive time for Pakistan and India: two countries who have been rivals since their origin. There were high tensions between them at the time of the tweet over a territorial dispute that led to the death of innocent Pakistanis at the hand of the Indian forces.

After Malik called Chopra out, security officers ripped the microphone out of her hands. Chopra’s first response to Malik was “Are you done venting?”

Chopra continued to patronize Malik for expressing her disappointment and distress at Chopra’s support for a group of people oppressing her country. Since Chopra is also a woman of color and a UNICEF ambassador, people were especially saddened by her hypocritical actions.

Malik is one woman of color who is important to me because of how she stood up for my home country. There are countless women of color who have come before Malik and faced patronizing rhetoric and discrimination for being strong. Similar to how Chopra treated Malik, women of color are perpetually and unjustifiably silenced for being fearless and stepping out of their stereotypical role in society.

Although Chopra is a woman of color herself, she has much more wealth and a higher status than Malik. This authoritative power was used to bring another woman of color down instead of supporting her for having a resilient voice, regardless of if Chopra disagreed with her message. Others in similar positions of power abuse their influence to marginalize women like Malik.

Women of color experience discrimination in places of work, as well.

A study about women in the STEM field by the University of California Hasting College of Law found that 100% of the female scientists interviewed experienced bias and discrimination. The discrimination is so ingrained that African American and Latina scientists were routinely being mistaken for janitors. Janitorial service is a respectable job, but it shows how much women of color have to prove themselves to step out from the roles expected for them.

According to the same study, Asian American scientists receive a lot of pushback when being assertive, and Latina women are classified as “angry” or “emotional” to overcome the “lazy” stereotype.

This pushback and discrimination are especially felt in the U.S. political system: a government institution heavily controlled by white men. Congresswomen of color, such as Alexandria Ocasio-Cortez, Ilhan Omar and more continue to face threats and attacks because they bravely speak out against this country’s injustices.

Others in Congress believe they need to be “reined in” or “wrangled.” Politico published an article in early spring “Inside Pelosi’s playbook to wrangle the freshmen.”

Strong women of color do not need to be silenced, and they definitely do not need to be “wrangled” as if they are animals. People must face the fact that these women play as important of a role in society as everyone else, and they are not going to conform their behavior to fit the passive, weak or domestic role that is expected from them.

Opponents of feminism continuously blame women, especially women of color, for not pursuing stronger career paths. They get frustrated that women “make themselves the victims of society” instead of working harder to achieve their goals.

It is not possible to do this when women are restricted from accomplishing their aspirations and higher purposes because obstacles continue to be created. The disrespect in silencing women of color and making them prove their societal worth makes it much harder to pursue further success in this society than it is for a white male.

Let our voices be heard. Stop putting women of color down, and stop asking if “we’re done venting.”