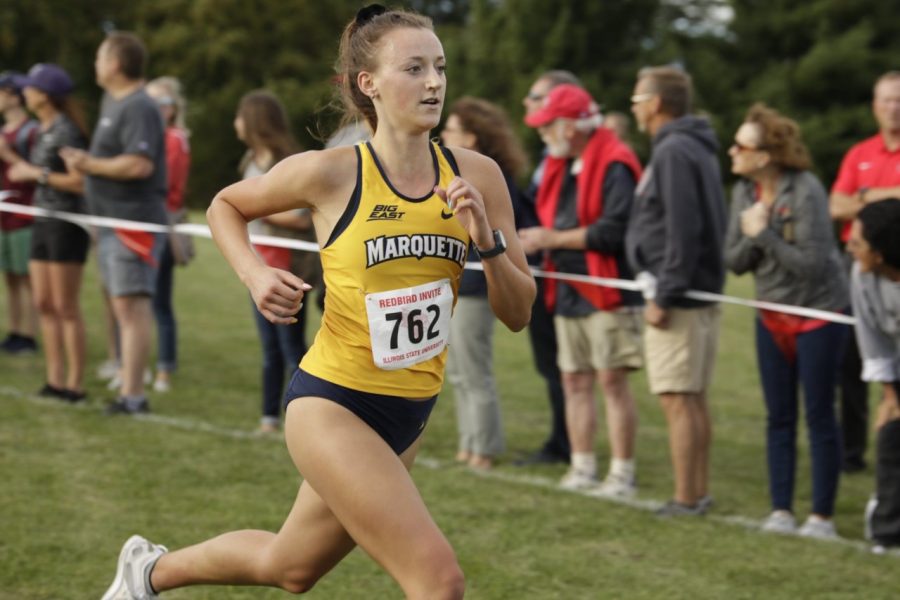 Freshman runner Kate Jochims has quickly stood out in Marquette cross country. In her first meet, she finished second overall at the Phoenix Open.

She followed that with a fifth-place team finish and a 14th-overall finish in a much bigger and more competitive meet, the Illinois State Invite. Her fast start has been a welcome addition.

“We knew she was one of our top recruits coming in,” sophomore teammate Kendall Pfrimmer said. “I was really excited to see what she could do, and she blew my expectations out of the water.”

Jochims was quick to deflect credit to her teammates for her successful transition from high school to college.

“Everyone has been so helpful with showing me the ins and outs,” Jochims said. “I’m thankful for my team members and coaches who have made this such a smooth transition.”

Despite the departure of coach Mike Nelson and the hiring of Sean Birren as the interim, Pfrimmer said she and other returners have tried to use knowledge from former seasons. However, Jochims said the coaching change didn’t have as much of an impact on her as it did on the upperclassmen and the program is running as smoothly as it could be.

“I really like (Birren’s) training style,” Jochims said. “It’s very similar to what I did in high school, so I’m very comfortable with it.”

She said her first career races were a little overwhelming, but now she can just focus on running and getting the freshmen used to running in college to get them up to speed.

Through the recruiting process, Jochims said she considered multiple Big Ten schools including the University of Wisconsin-Madison and the University of Minnesota. Ultimately the BIG EAST and Marquette’s proximity to her home of Muskego, Wisconsin, was the better offer for her.

“The Marquette program suited all my needs as a runner,” Jochims said. “It’s close to home, I loved the team members and coaching staff when I came to visit and it is a school smaller than the others I was considering, which creates a more intimate team atmosphere.”

Jochims said being able to train with teammates similar to and above her skill level has been a big help.

“Everyone is on the same page,” Jochims said. “In high school, runners are all over the place in terms of talent and workload, and now I think I will become a better runner with the increased level of competition.”

Even with Jochim’s fast start, and now after seeing what she can do in races, the expectations for her have remained the same, Pfrimmer said.

“We all expect a lot from each other,” she said. “Everyone’s been doing this for a long time, and we want to just continue to (set) personal record(s) throughout the year and then contribute at (the BIG EAST Championships).”

Jochims said she has similar goals along with staying healthy, continuing to improve and competing at a high level.