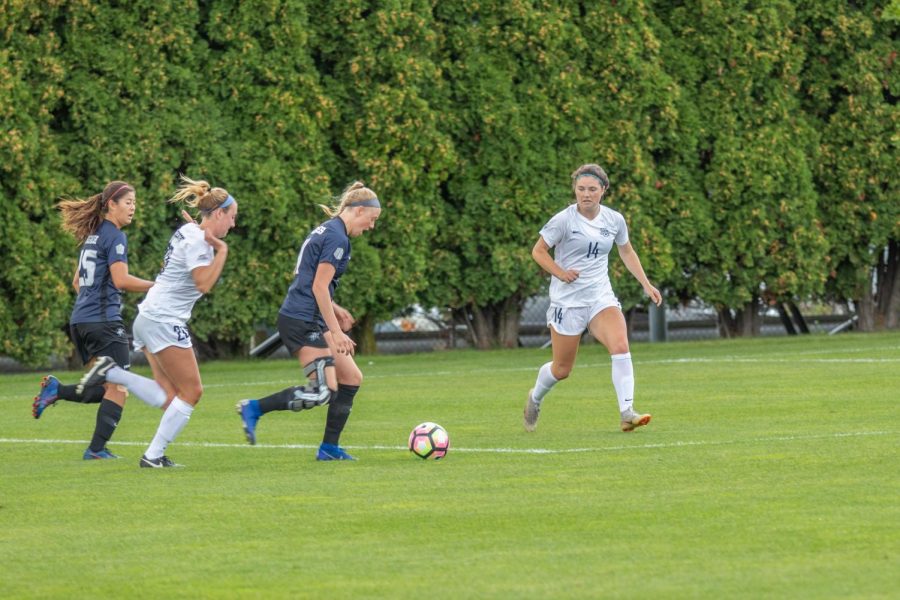 Utah State scored three goals in a span of less than eight minutes Sunday against Marquette at Valley Fields.

Marquette came into Sunday afternoon’s matchup against Utah State having shut out Big Ten foes Michigan and Minnesota in its past two games. However, Sunday’s contest was a different story, as the Golden Eagles lost 5-1 to the Utah State Aggies, falling to 2-4 this season.

The Aggies came into Sunday’s game scoring only three goals through five games, but they scored three goals in the first half in an eight-minute span, which gave them momentum and the lead for rest of the game.

In the second half, Marquette’s  was more aggressive, trying to cut Utah State’s lead down. That aggressiveness led to a break in MU’s defense and another Aggie goal in the 66th minute.

“There were some elements in the second half where we played with a little more urgency and more effort where we created more chances, but it wasn’t enough to get back into it,” head coach Markus Roeders said.

Marquette’s lone goal came in the 71st minute off senior Emily Hess’ corner kick. It was Hess’ first goal of the season and cut the Aggies’ lead to 4-1.

“I was just trying to bend it towards the back post because that’s usually where I try to aim, and this time it just hung a little more in the air,” Hess said.

This wasn’t the first time Hess has scored on a corner kick. She also did it in her first career game back in 2016.

“It was like a full-circle moment for me, so it was pretty cool,” Hess said.

Utah State scored another goal in the 84th minute. This time it was senior forward Alecia Robinson who scored. All five Utah State goals were from players scoring their first goals of the season.

“I thought defensively we’ve been pretty good so far this year, but at the same time, you can’t gift the other team goals. It didn’t look like Marquette women’s soccer today,” Roeders said.

Although Marquette lost 5-1, the Golden Eagles had the same number of total shots and more shots on goal than the Aggies. Marquette also had six corner kicks while Utah State only had two.

“We’ve got a week to prepare for our next game, and it’s going to be an important week for us because today is the most disappointing moment we’ve had this season, and it’s up to us to ride the ship and do better next week,” Roeders said.

Marquette (2-4) will look to rebound against UW-Milwaukee next Sunday in the latest renewal of the crosstown rivalry at 7 p.m. in Engelmann Stadium.