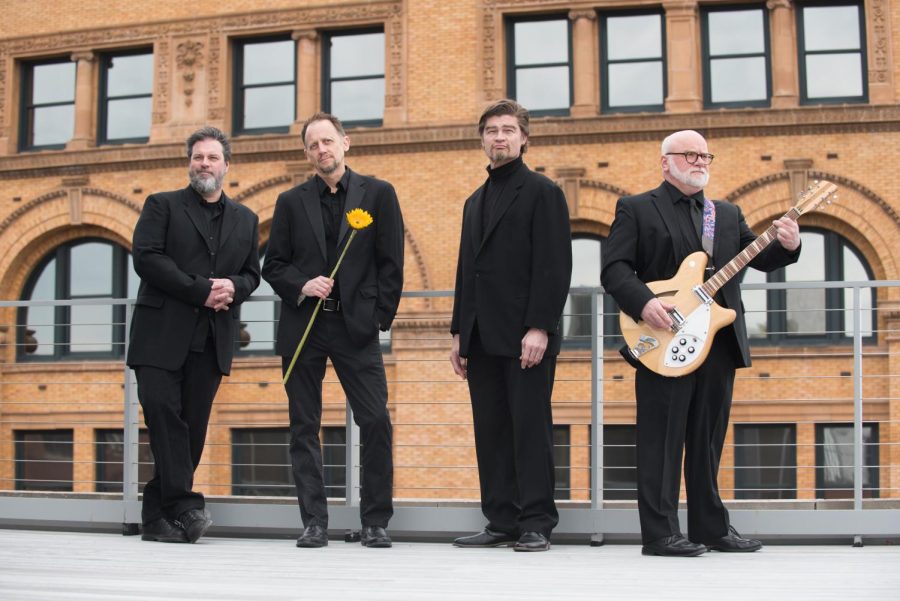 Mike Benign, before becoming the founder, lead vocalist and guitarist of the group, went to graduate school at Marquette for his master’s in English. He was a teaching assistant and an adjunct faculty member teaching freshman English for five years. He also taught a graduate course on branding for three years in the College of Communication.

Benign has been in various bands since he was 17 years old. Before that, he became a self-taught guitarist after his cousin gifted him an electric guitar.

“(I) taught myself how to play and wasn’t very good, but (I) fell in love with a bunch of bands and learned how to play guitar by learning how to play their songs,” Benign said.

The Mike Benign Compulsion started in 2010 with the release of its first album “Rollicking Musical.” Since then, the group has released three other albums and its fifth album, titled “Bygones,” will come out Sept. 17.

Benign said the songs “Olivia Rainmaker,” “I’m Sorry For Everything” and “These Heroes” emulate what he had imagined they would sound like perfectly.

During the creation of the first album, Benign called upon Marquette German Professor Michael Koch to play drums in his band.

Koch has been at Marquette for five years.

Benign said he and Koch got to know each other through the Milwaukee music scene while in their 20s.

Koch said he used music as a form of self expression growing up.

“It’s pretty natural for youngsters to gravitate towards some sort of self expression and for me, it was music and drumming,” Koch said.

The entire band is a group of long-time friends. Benign said that they have known each other and played with each other in different forms over the years.

“We were piecing together songs, and then it gradually grew into an album, and then the album grew into a band,” Benign said. “We did it backwards. We did the recording first, and then we started playing live.”

Both Koch and Benign have worked to balance their musical careers and their lives outside of the band.

Koch said music is not “just a hobby” for him.

“I honestly don’t know what I would do if I didn’t have music in my life,” Koch said. “Some of the most sublime movements in memory are connected with music. Performing music is really important to me … (so) I have to balance it.”

For Benign, music is a priority, so for ten years, he said he chose jobs that let him be a musician first.

“I tended bar … I was an adjunct (professor) at Marquette, but I was only teaching two classes, so I had a lot of time, and I was in a band that traveled a lot,” Benign said. “Now that’s just not an option given what I do.”

Benign now works at an advertising agency in Milwaukee.

Benign said as the songwriter of the group, it is important that he makes time to write songs.

Benign writes in his workspace, which happens to be his attic.

“We’re proud to put out five full-length albums (with) all original material in 10 years with all of the other stuff we had going on,” Benign said. “We’re pretty proud of that and also proud of the quality of the work that we’ve been able to put out.”

Koch referred to this album, “Bygones,” as another milestone for the group.

“It’s been wonderful to connect with musicians with whom one doesn’t always have to explicitly say what you want because we’re all on a similar musical wavelength in terms of what we know serves the song,” Koch said.

In addition to Benign and Koch, there are two other members of the group: Joe Vent, who plays guitar and vocals and has been in bands with Benign since they were 17, and Paul Biemann, who plays the bass and vocals.

Benign said the group has known each other for a long time and that they think the same way about music and like the same artists.

“We have the same ideas about what makes the song work and what doesn’t,” Benign said. “There is a lot of personal history between us as well, so I think that’s part of what has made it enjoyable.”

Phil Bregant, leader of Wire and Nail, an American rock-and-roll/country band, will also be performing at Club Garibaldi with The Mike Benign Compulsion.

Bregant played cello and violin for the upcoming album, “Bygones.”

He said Benign had a clear vision for the album, and Bregant was there to facilitate that.

“(Wire and Nail) started as a passion project, and then once we recorded a record, we decided we should do something with it,” Bregant said.

Wire and Nail is expecting to release a record this fall.