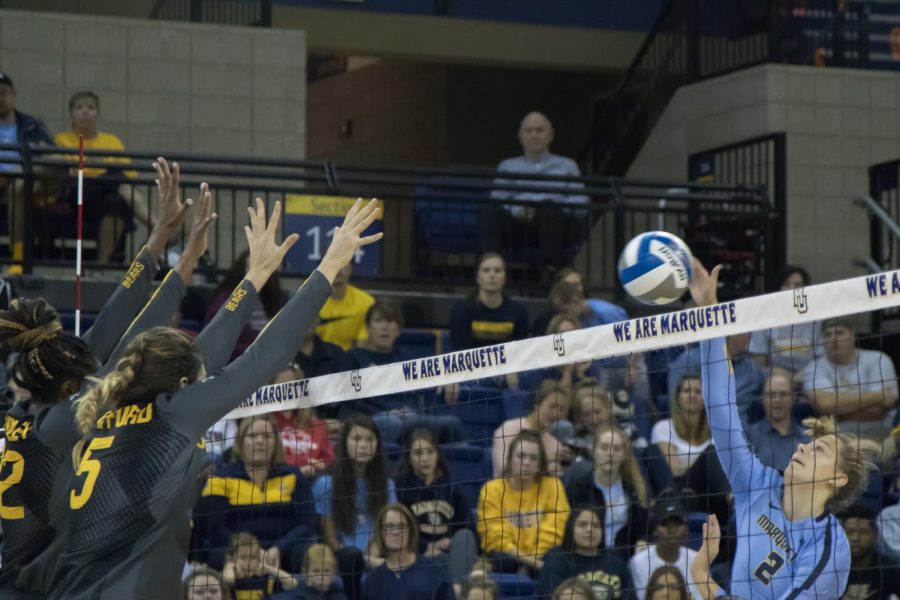 From the start, nothing went right for the Golden Eagles.

Less than 10 minutes into the match, MU took its first timeout trailing 4-0. That momentum never shifted, as the Bears won the first set 25-14 on a 3-0 scoring run.

While the Bears finished with a .360 hitting percentage and three blocks, the Golden Eagles struggled connecting on the attack. They hit at a -.026 clip in the first set.

“They executed perfectly from the serve pass, and we did not,” Theis said. “We have to play better at the beginning of matches. … If (the Bears) start off that confident, it’s tough to win. So you have to start off making people uncomfortable, and we did not do that.”

Most of the second frame was back and forth until Baylor took a late 20-17 lead. Despite two set points and hitting the Golden Eagles’ best mark of the day of .267, Marquette allowed another 3-0 run that resulted in a 27-25 set loss.

“We snuck back in and even had a game-point opportunity in the second,” Theis said. “We were playing pretty good despite all their blocks. Just missed a chance to get back in and maybe extend that match. Admit it, if we’re in game four right now, things are a little bit different.”

Senior outside hitter Allie Barber connected for three kills in the first seven points and finished with seven kills in the second set alone.

Baylor dominated the third set, getting out to a quick 10-2 lead while never relinquishing the advantage. Despite plenty of blue and gold in the stands, the Bears maintained all the energy. The game ended on a Marquette net violation.

“To beat those guys, everybody has to play good at the same time, and we weren’t today,” Theis said. “We didn’t play our best. Credit to them for making us look that way. But just a lot of even unforced things, secondary setting, missing some of the things we were missing.”

For Baylor, junior outside hitter Yossiana Pressley finished with a match-high 19 kills.

“She’s probably one of the best three outside hitters in the country,” Theis said. “From the front row, from the back row, she’s a really special player.”

Next weekend the No. 11 Golden Eagles (5-1) will travel to Normal, Illinois, for the Redbird Classic, where Marquette will face University of Central Florida, No. 5 University of Illinois and Illinois State University. Tipoff against UCF is at 4:30 p.m.

“We haven’t had a lot of good practice opportunities right now because we’re pretty banged up from these matches,” Theis said. “These three-match weekends are really hard. … We’re not getting opportunities to practice, so we’re getting scouted now. We’ve got to make some changes … and get back to the drawing board.”