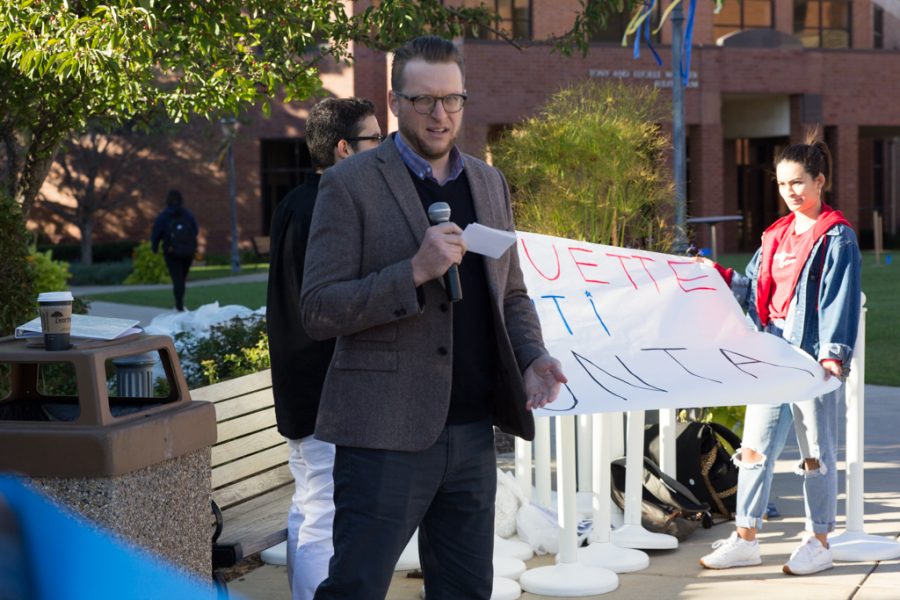 Nearly 130 university faculty members are speaking out in an open letter against Marquette’s updated demonstration policy, claiming they were left out of the policy’s drafting and adoption process.

The Aug. 16 policy requires students, staff and faculty members to register a group liaison and await an appropriate office’s response to stay and demonstrate in the Alumni Memorial Union. Individuals can also utilize the green space outside the AMU. Other areas on campus require students, staff and faculty members to seek written approval from the university for their demonstration plans.

A slew of faculty members feel the policy was updated without sufficient campus input.

Acting provost Kimo Ah Yun said in an email that the policy was reviewed and approved by representatives from the Office of the Provost, the Office of Finance, the Office of General Counsel and the Department of Human Resources. He said the process ensured “collaboration” and “consistency in university policy development.”

The same approval process is used for all university policies and procedures, Ah Yun said. He added that himself, along with senior vice president and chief operating officer Joel Pogodzinski, give final approval for all policies.

“It seems to me that there is a top-down approach,” Grant Silva, an associate professor of philosophy, said of the policy process. “Faculty were alienated from it. Marquette, ideally, is supposed to have power distributed throughout the university to varying degrees.”

Silva has previously spoken about why Marquette should support unions.

Brittany Pladek, an assistant professor of English, said she felt the university’s announcement of the policy was not done in good faith.

“It felt like no one wanted us to know about it until a demonstration happened that violated it,” Pladek said.

Dawne Moon, an associate professor of Social and Cultural Sciences, said the administration should use insight from faculty to run the institution.

“They’re treating faculty like we’re getting in the way,” Moon said.

In an email to faculty and staff Thursday, Ah Yun said he would ask the University Academic Senate to discuss the policy at its next meeting, which is scheduled for Sept. 16 at 3 p.m. in AMU Ballrooms C and D.

Ah Yun wrote that he hopes communication about the policy “results in a clearer understanding of the intent and specifics of the policy.”

Moon said the Senate had already decided the policy was on the agenda before Ah Yun requested it.

“We need to have a conversation about the issue,” Sumana Chattpadhyay, chair of Marquette’s Academic Senate, said.

Sergio González, an assistant professor of history, said he hopes the faculty members’ request to repeal the policy is addressed sooner than the Sept. 16 meeting.

“Many of us who signed the letter are hoping the university administration repeals this policy because of two main points: the process by which the policy was passed, and the content of the policy itself,” González said. “It doesn’t really make sense to me to pass policies that are going to affect people, and the people are never in the room to discuss what that policy actually means.”

The open letter from faculty condemns the policy “in the strongest possible terms,” calling for its immediate repeal. The faculty members see the policy as a limit to free expression on campus.

Although Marquette’s status as a private institution allows it to limit First Amendment rights to free speech, the open letter says the university “should pride itself on imposing at least equivalent standards upon itself as those that the Constitution imposes upon public institutions.”

“How free is free speech when you have to ask permission?” Silva said. “(Marquette) tells students to ‘Be the Change,’ but ask for permission first.”

The letter claims that activism promotes leadership, citizenship and civic engagement in the lives of students, staff and faculty. It says demonstrations can shine light on “grievances that would otherwise be unknown, misunderstood, or de-emphasized.”

The university’s demonstration policy originally applied to only students, but was updated in August to include staff and faculty members.

“I think this was a problematic policy when it was being applied simply to students,” Silva said. “The administration’s response is that now they’re being fair and applying this bad policy to everyone. I think it’s important to keep in mind that faculty have a mind of their own and opinions on topics that we’re not often asked about, especially by this current administration.”

Pladek said she finds the university’s demonstration policy to be “deeply hypocritical from a Jesuit standpoint” and “very troubling.”

“Marquette’s guiding Jesuit philosophy encourages students to live their values by standing up for what they believe in, including St. Ignatius’ (saying), ‘Go set the world on fire.’ I think it really violates the spirit of Jesuit inquiry,” Pladek said.

Pladek said she feels the university’s policy serves as a message that the administration wants power to veto any demonstrations it does not want to hear or be seen by the community.

“Why else would the policy demand that faculty, staff and students require authorization for any demonstration that does not occur in a single building and green space on campus?” Pladek said.

Moon said the policy is written to make the lives of administrators easier.

“It seems like it’s meant to curtail or intimidate people who might disagree with the way things are going,” Moon said.

Silva said the updated demonstration policy seems to be a “manifestation of the administration’s worry about the unionization of graduate students and adjunct professors.”

The unionization efforts by faculty and staff members occurred last spring. They demonstrated in various areas on campus, including inside Zilber Hall, where administrative offices are located.

These faculty and staff members continue to ask Marquette for a fair process to unionize, which they believe would provide non-tenure faculty and graduate students with a track to better pay, job security and health care benefits.

Jodi Melamed, an associate professor of English and Africana Studies, said she felt the university enacted the policy to avoid hearing criticism. She said nourishing a democratic culture should be a top value at the university.

“Dissent should be welcomed rather than feared,” Melamed said.