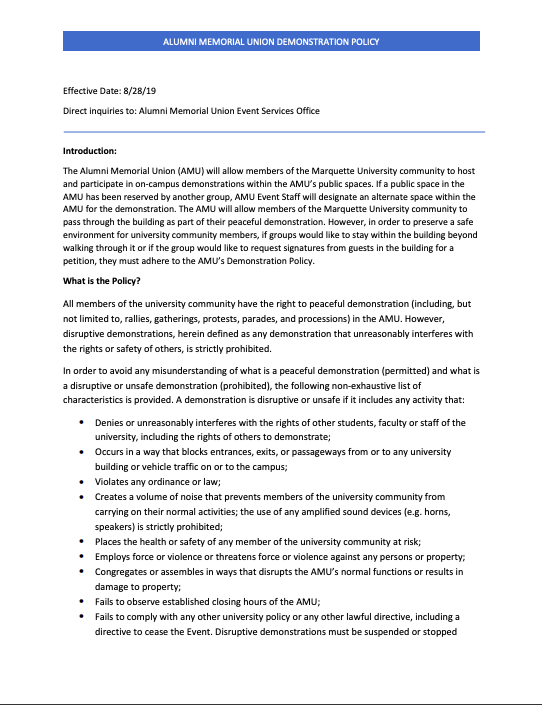 The most recent policy released by the university is an update concerning the Alumni Memorial Union and is four pages containing information about demonstrations specifically in the AMU. Photo courtesy of marquette.edu

Over the course of two weeks, the university released four demonstration policy documents.

Two of the policy documents refer to the demonstration policy itself, and the other two refer specifically to the policy’s implementation in the Alumni Memorial Union.

Some of the documents have been removed from the university’s website while others remain. Each document includes slightly different information, with some revisions alluding to potentially substantial changes in meaning.

The revisions were not openly communicated with the campus community.

“As is our long-standing practice, (university policies and procedures) are communicated to the university community through the university’s internal e-newsletter and are available on the university website,” acting provost Kimo Ah Yun said in an email.

The university sent a Marquette Today newsletter email, which is sent to students, faculty and staff Mondays and Thursdays, about the updated demonstration policy Aug. 19.

But that version of the policy, dated effective Aug. 16, was the first in a round of other policy documents. No subsequent Marquette Today emails were sent about updated versions of the policy, each with later effective dates: Aug. 20, Aug. 27 and Aug. 28.

The policy dated effective Aug. 20 included information that was not present in other policy documents, including the fact student organizations and university departments needed to make space reservations for protests through the Alumni Memorial Union Event Services Office. It said space reservations were needed for public areas of the building, including the first and second floor lobbies.

It also said the Office of Student Development would need to approve any demonstration events two weeks prior to the event dates.

“The Aug. 20 version of the AMU policy document was removed because that version inaccurately stated that approval was needed to use the AMU space for demonstrations,” acting provost Kimo Ah Yun said in an email. “That is not, and never was, the case.”

The Aug. 20 policy provisions about designated organizers and approved space reservations were removed in the Aug. 28 policy, which also apply to the AMU.

The university also removed a line from the Aug. 20 policy concerning what constitutes a disruptive or unsafe demonstration.

The Aug. 20 policy reads that a demonstration is disruptive or unsafe if the following circumstances apply: “Occurs inside university buildings other than the AMU and the groups designated space within the AMU, unless prior written approval by the appropriate office was given to hold the Event elsewhere on campus. The approved Event cannot interfere with the daily business, traffic flow, ingress/egress patterns or scheduled events in the facility or on campus. The approved Event must cease in the event of an emergency or building evacuation.”

Those provisions have been removed in the Aug. 28 policy.

Steven Hartman Keiser, director of undergraduate studies and associate professor of English who specializes in linguistics,  said it seemed unclear who would determine when a demonstration interfered with daily campus activities.

“The very nature of a demonstration is to call attention to an issue, but how is this possible when access to the places where people in power conduct their ‘normal activities’ is restricted?” Hartman Keiser said in an email.

Hartman Keiser said he witnessed the sit-ins in Zilber Hall that were part of unionization demonstrations last spring. He said he saw demonstrators argue their case to all who entered the building.

“(Did) this make visitors and those who work in Zilber Hall uncomfortable? Certainly. Did it ‘interfere with daily business’? Not to my eyes,” Hartman Keiser said in an email. “But under the new policy, who gets to decide?”

The Aug. 16 and Aug. 27 policies also include changes.

Those two policy documents are versions of the overarching demonstration policies, which applies to all campus buildings.

The first change between the two documents is in the section requiring groups organizing demonstrations to “Maintain Peace and Order” on Marquette’s campus.

The Aug. 16 policy said “the right of individuals to personal expression consistent with university norms must not be denied.”

The updated Aug. 27 policy now reads “consistent with university norms, the right of individuals to personal expression must not be denied.”

An additional change between the policy documents is shown in the section describing how to implement the policy.

The original Aug. 16 policy states “if all parties agree regarding the substance of the proposed Event and the institutional expectations,” the event information will be shared with relevant offices.

The updated policy states “if all parties agree regarding the Event logistics and institutional expectations,” the information will be shared with relevant offices.

“Logistics suggests that details of event planning are what must be agreed upon. It could refer to timing, size and length of the demonstration,” he said in an email. “But it could also involve more detail, (such as) the nature of signage, path of march, plans to deal with counter protestors, plans to dispose of garbage, etc.”

Hartman Keiser said the real issue he sees with this part of the policy is the need for all parties to agree with “institutional expectations.”

“If this policy is an indication of ‘institutional expectations,’ then the host of restrictions that it contains might make it difficult for demonstrators and the university to agree,” he said in an email.

Hartman Keiser said he found issue with the need to allow a two-business day advance notice to the university in the Aug. 27 policy. He said this restricts spontaneous demonstrations and prevents demonstrators from being able to respond to an issue in a timely matter.

The university said the Aug. 27 updated policy document includes only minor wording changes that do not change the overall message of the policy.

“The Aug. 27 policy document includes minor wording tweaks for clarity,” Ah Yun said in an email. “Those tweaks do not in any way change the purpose or intent of the sections/clauses.”

“If (the university) wants to keep tweaking the policy, they can. It’s still something that we, the faculty, students and others are concerned about,” Giaimo said.

She said the wording differences did not change the substance of the university’s original declaration.

Giaimo participated in unionization demonstrations by faculty, staff and students last spring. She has particular concerns over the demonstration policy’s description of disruptive versus peaceful demonstrations.

“(The policy) gives the administration too much discretion to decide what is a disruptive protest,” Giaimo said.