Transforming the World to Community 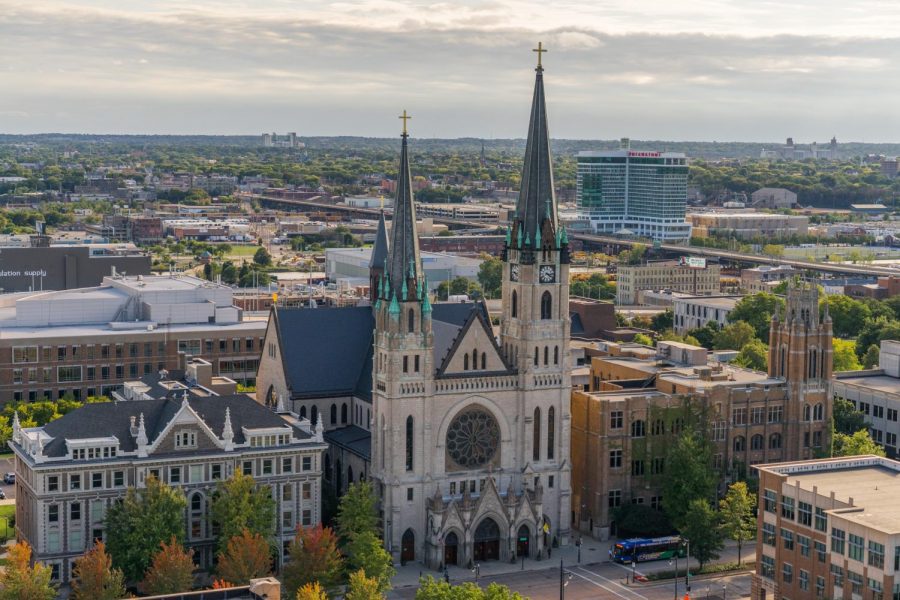 Church of Gesu is located on Wisconsin Avenue.

In order to “set the world on fire,” one must acquire the tools to make the flame.

It’s the mission of Marquette University to have their students be “ready in every way to go” and become problems solvers and agents for change in the footsteps of St. Ignatius and Fr. Jacques Marquette.

To change the world, everyone must do their own part, Fr. Beausoleil, adjunct professor in the College of Education and pastoral minister in Schroeder Hall, says.

“I like to say to students, ‘Not only be the difference, but be a difference, individually,'” Fr. Beausoleil says.

Before Marquette reached students globally, it started small. The current cost of a Marquette education in 2019 is over three times the $16,000 grant that started the university. It began as an all-male, liberal arts college named by Fr. John Martin Henni in 1881 in honor of missionary and explorer Fr. Jacques Marquette, according to the university’s website.

Today, Marquette is one of 27 Jesuit universities in the country and one of 188 in the world, according to the Association of Jesuit Colleges & Universities. The commitment to “academic excellence, service, leadership and caring for the whole person” ties these institutions together.

Fr. Beausoleil says during his time in college, one political science professor changed his view on the power of education.

“He invested time in me, he mentored me. … I was all over the place.” Beausoleil says. “First I was pre-business, then I was theatre, then I was history. But this political science course and this one professor changed my life.”

Fr. Frederick P. Zagone, director of operations for the Jesuit Residence and acting vice president of the Office of Mission and Ministry, says the value of a Catholic education comes in learning beyond “practical course content.”

“One of the things that I’ve learned from our alumni is they feel like at a place like Marquette, they learned how to think,” Fr. Zagone says. “That’s real important, especially when we’re in such a rapidly changing world.”

Pausing throughout one’s day to think about accomplishments and goals is an essential extension of Ignation Spirituality, Fr. Zagone says. Reflection allows people to discover themselves.

“I learned about myself and about my values (through reflection),” Fr. Zagone says. “(In prayer) we often use the prayer of our Father Arrupe: What is it that gets you out of bed in the morning? What is it that excites you? What is it that you’ve fallen in love with?” Fr. Pedro Arrupe was a figure in the church who still influences current practicing Jesuits.

To become a Jesuit, the formation process can take between 10-15 years, according to the USA Midwest Province Jesuits. The first two years consist of prayer and spiritual exercises in a stage of formation called the novitiate. Novices then participate in an extended period of academic training, studying philosophy and theology and often teach at a Jesuit institution. Jesuit brothers are then ordained, and in tertianship — the last stage of formation — they go on a final spiritual retreat at a Jesuit retreat center and make vows to the faith.

Like many undergraduates, Jesuit graduate students partake in a variety of activities.

“Because I’m doing a Ph.D., I’m studying, reading (and) I also get a good workout in,” Fr. Chris Krall, a graduate student and the youngest Jesuit Father at Marquette, says. “I pray (and) I celebrate Mass with the rest of my community.”

Jesuits take four vows to the faith: poverty, chastity, obedience and a special vow of obedience to the pope, in which they must be ready to accept a mission wherever their services are needed. In February 2019, the Society of Jesus released four priorities to guide the mission of Jesuits for the next decade; these priorities include showing the way to God, walking with the poor, accompanying the young and caring for the environment.

Fr. Beausoleil is currently in the process of his 13-month tertianship. He says he felt called to start tertianship this past summer, and as part of the process participates in faith sharing and volunteers in areas needing social justice. He will conclude his formation in summer 2020 with another silent retreat, reviewing the Jesuit constitution and final vows.

While every Jesuit priest goes through formation, the process is highly individualized, Fr. Krall says.

“The formation process is not like a cookie cutter that’s just trying to shape us into being all the same,” Fr. Krall says. “It’s highlighting the talents and the gifts … that each person has and then (looking at) how those gifts can best be developed and enhanced … for the greater glory of God.”

Marquette and other Jesuit institutions seek to highlight these talents through “cura personalis,” or care for the whole person. The Jesuit Institute London, a group providing instructional resources for Jesuit schools, defines the role of both teachers and students in accomplishing this goal. Teachers are to be “more than academic guides” and take interest in instilling in students “a commitment to service that will make (students) agents of change”; students should actively participate in — and not passively receive — “his or her own personal call from God, (which is) a vocation of service in personal and professional life.”

Fr. Beausoleil teaches Philosophy of Education to undergraduates and his goal in doing so is to “instill a passion … (toward) excellence in teaching.” He adds that part of the Jesuit education’s purpose is to inspire development of “faith that does justice.”

“St. Ignatius is famous for saying, ‘Love shows itself in deeds more than words,'” Fr. Beausoleil says. “So, I think that carries on into the classroom. You’ve got the theories and all these words — but you want those words to be put into practice.”

The fifth teacher in a family of seven, Fr. Beausoleil says he was inspired to become an educator not only by his family, but also by the priests of his past.

“The priestly role is a teaching role,” Fr. Beausoleil says. “One of the reasons I’m a priest is because I’ve had good spiritual direction with priests throughout the years, … (and) being touched in the heart that way, you want to give back.”

“I’ll bake a bunch of stuff and put it out on the front desk and it’s first come first serve — I’m definitely not making 1400 cookies for 700 residents,” Fr. Beausoleil says as he laughs.

The Dr. E. J. O’Brien Jesuit Residence, located at 1345 W. Wells St., is a living space that students may be less familiar with. The building houses many of Marquette’s Jesuit priests, and although undergraduates do not live there, Fr. Krall says the Jesuit Residence plays an essential role in building a sense of community by hosting opportunities for students to receive spiritual direction, attend advising sessions, go to Mass or even eat a casual meal.

“I think (the Jesuit residence is) a pretty hospitable house,” Fr. Beausoleil says. “We don’t say no to opportunities for hospitality, and it’s been the most hospitable community that I’ve lived in as a Jesuit.”

Fr. Zagone says what called him to being a campus minister rather than a parish priest was the opportunity to exercise his ministry among students, with part of this experience being move in day.

Fr. Zagone participated in move in day this school year, as many students prepared to start a new journey on campus.

“Well even just working (move in) this morning and seeing the life and the energy of the students that are moving in and seeing the new journey that they’re beginning, … I still sense that kind of excitement myself,” Fr. Zagone says: “It’s a new year and … new people will come into place, and so much of what we do or what we become is based on where we’ve been and who we meet.”

Students who are not Catholic can still find value in a Jesuit education, Fr. Beausoleil adds.

Fr. Krall, who is pursuing a Ph.D. in both theology and neuroscience, says there is potential to integrate faith into all areas of study, including the sciences, and this is core to the Jesuit identity.

“I go into Schroeder Complex (where) the biological sciences (are), and I’m wearing my collar and (I’m asked), ‘Father are you lost? This isn’t the theology department,’” Fr. Krall laughs. “(But) the Jesuits have been the ones to be on that frontier of bringing into dialogue theology with the sciences (and) the humanities. It’s about how do we find God in all things … (and) to see the greater glory of God alive in the world.”

Faith is also essential to solving the issues plaguing the world around us, Fr. Krall adds. He says the key to resilience is a “faith-based approach” and “faith in some kind of tradition.”

“(If we) take a pill to make (ourselves) feel better and make (ourselves) feel happy, like this easy way out, that’s never going to give us full satisfaction,” Fr. Krall says. “That’s where there’s something deep about coming together as a community, coming together as a church, … and (touching) into some of those deep wounds and longings that we have that no drug or alcohol can quench.”

Above all, Fr. Krall says he believes the most important takeaway from a Marquette education is something intangible: a team mentality.

“I think it’s neat that when you go to a basketball game, it’s like the one time the entire Marquette community is together, … but I hope (that mindset) can extend beyond simply the basketball court,” Fr. Krall says. “We are all together working for one common mission. We’re a team (and) we’re a community — we all bring different gifts and talents that we have to transform the world.”