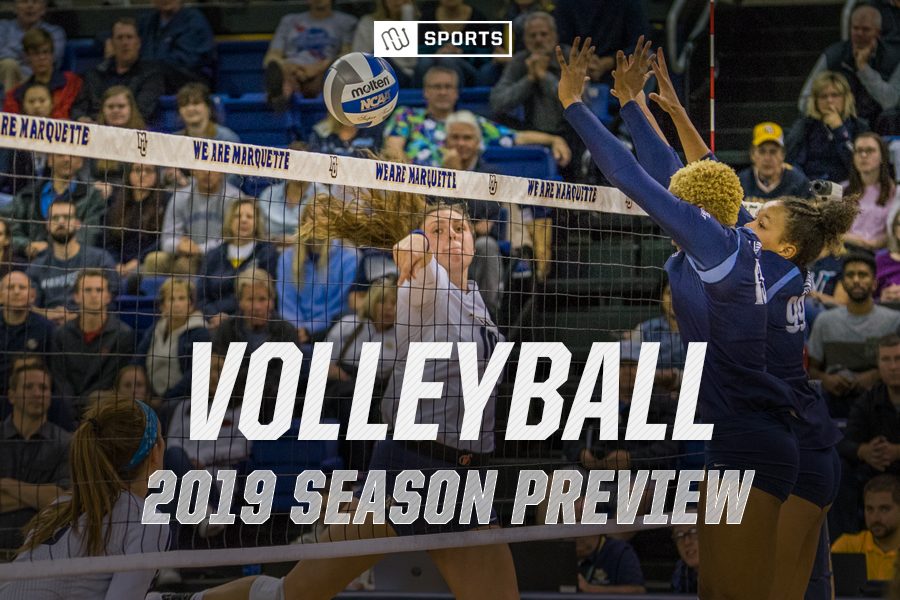 After reaching the Sweet 16 for the first time in program history last season, Marquette volleyball comes into 2019 ranked No. 16 in the American Volleyball Coaches Association Preseason Coaches’ Poll and as the preseason favorite to win the BIG EAST for the second consecutive year.

Yet the high expectations do not seem to be fazing this year’s volleyball team.

“As a team, we put a lot of pressure on ourselves to do the best we can and to succeed,” senior Allie Barber said. “This really isn’t any different for our expectations for our own program.”

Those outside expectations come after appearing in the Sweet 16 in the NCAA Tournament for the first time in program history and losing in the BIG EAST Championship.

Despite the graduation of three seniors, including starters Jenna Rosenthal and Anna Haak, head coach Ryan Theis said having an upperclassman-heavy roster will bring continuity and success in 2019. Five of the seven starters from last year’s team are back.

“We’ve got the ability to be a really good offensive team again,” Theis said. “We have good attackers, we control the ball pretty well (and) our setting looked pretty good yesterday.”

That means Barber and fellow senior Lauren Speckman are poised to be leaders again, Theis said.

“The seniors have been terrific for four years,” Theis said. “To say that Lauren Speckman and Allie Barber haven’t been leaders for us would certainly be inaccurate.”

Marquette has another difficult nonconference schedule this year. Half of the opponents are either ranked or receiving votes in the AVCA preseason poll.

“We just want to push each other to be the best and to not have regrets in the end of the day,” junior Hope Werch said.

One of the toughest challenges will occur during the first weekend when they take on No. 9 Brigham Young University Aug. 31 in Utah for the BYU Tournament.

Other key matchups prior to BIG EAST play include taking on in-state rival No. 5 Wisconsin Sept. 5, traveling to the Redbird Classic Sept. 14 to avenge its NCAA Tournament loss to No. 6 Illinois and hosting University of Northern Iowa, a team receiving votes in the poll.

The team’s home opener won’t be until Sept. 7 against Syracuse University. Less than 24 hours later, Marquette will play No. 20 Baylor University.

The Golden Eagles kick off their BIG EAST season with a home opener against Butler Sept. 25. The Bulldogs finished seventh in conference standings last year and ended with a 9-21 overall record.

Outside hitters
Much of Marquette’s experience comes in the front line.

“It would be hard to find a lot of teams that have five outside hitters at that quality,” Theis said. “We’re pretty skilled at (that) position.”

Barber and Werch are All-BIG EAST preseason honorees for 2019 after productive 2018 seasons.

“It’s obviously huge when you know what kind of points and production you can get out of people that have been in your program two and three years,” Theis said.

It’s Barber’s second consecutive season as BIG EAST Preseason Player of the Year, and she was an AVCA Second-Team All-American in 2018.

“My personal goal is just to make the most of my last season here and to really enjoy every moment and not take it for granted,” Barber said.

Theis said the best part about Werch is her passing and her versatility hitting from both sides. She led the conference last year with 55 aces. Theis called her the “utility infielder,” someone he could move around the court and make space for others to be successful in their positions.

Before summer training Werch said the team each received cards that said specific aspects the coaches wanted them to improve on.

“Having those constant reminders, even if they’re not watching, (shows) we’re our biggest advocates and so are our teammates,” Werch said.

Meanwhile, senior Madeline Mosher is recovering from an injury. However, she participated in Sunday’s Blue & Gold Scrimmage.

Junior Kaitlyn Lines is a 6-foot outside hitter from Gilbert, Arizona. She transferred in March from the University of the Pacific, where she led the West Coast Conference with 437 kills and 502 points.

“K.J. is this beast,” Werch said. “She comes in with this winning mentality and she just wants every single ball.”

Theis also has incoming freshman Hannah Vanden Berg at the outside hitter position.

Vanden Berg, the 6-foot-2 hitter from Little Chute, Wisconsin, is a three-time conference Player of the Year, won the 2017-’18 Wisconsin Sports Girls Athlete of the Year and led her AAU team to three national qualifiers. Theis said she’s having a great offseason.

Middle blockers
There is an open position at the middle this season after Rosenthal graduated.

Another option will be redshirt junior Sandy Mohr, who has not played since transferring in August 2017 from Evangel University in Springfield, Missouri. The 6-foot-4 middle from Muskego, Wisconsin, averaged 2.24 kills per set at Evangel and helped her AAU team to a title at the 18s Open National Championship.

Senior Gwyn Jones, a 6-foot-3 middle blocker from Greenville, Indiana, is transferring from Auburn University. In three seasons with the Tigers, she accumulated 807 kills and 164 blocks and was named to the Southeastern Conference All-Freshman Team in 2016.

“Gwyn is super, super fiery,” Werch said. “She’s super fun to be around. She lights up the room.”

Jones was also a PrepVolleyball All-American in 2013 and a member of the Junior Volleyball Association All-National Team in 2014.

“Sandy and Gwyn are both pretty experienced players,” Theis said. “(They) are definitely going to be factors in the middle.”

“She does not have a long and extensive volleyball (career),” Theis said. “She’s a good athlete who’s going to be very good for us in the future, but freshman year, things are moving a little bit quick for her.”

Defensive specialists
Alongside Werch on the preseason All-BIG EAST team is 5-foot-7 junior Martha Konovodoff. At the libero position, Konovodoff ended up on the 2018 BIG EAST Second Team and AVCA All-American Honorable Mention with a team-high 4.87 digs per set last season.

“She had another good offseason,” Theis said. “She’s been really good this preseason so far. (Sophomore) Katie (Schoessow) and (junior) Gabbi (Martinez) have improved at the DS position, so I think you’ll see all of them in different spots in different times throughout the year.”

Speckman, who is in her final season as a Golden Eagle, started in 28 matches last season and had a team-high 6.91 assists per set and a total 179 digs.

Rose did not start in any games last year but made an appearance in all 31 matches and recorded 5.21 assists per set and 163 digs.

“We have to be pretty selfless when it comes to playing time, roles and set distribution,” Theis said. “It’s a really deep team.”