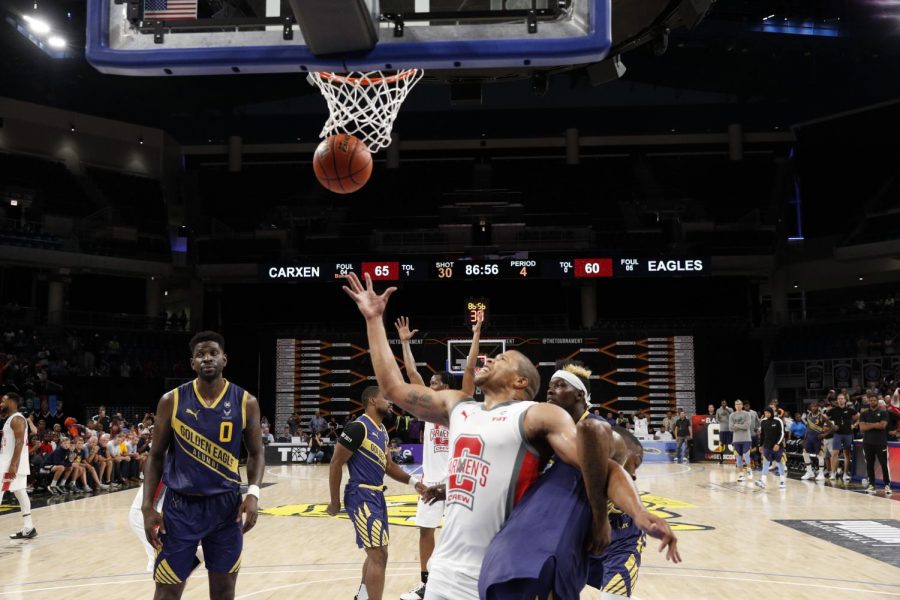 Photo courtesy of The Basketball Tournament

Early offensive struggles slow down Golden Eagles
Early on, it seemed as if Golden Eagles Alumni couldn’t find the basket.

The Marquette alumni ended the first quarter shooting 30 percent from the field. No Golden Eagle made more than one shot from the floor. 6-foot-5 forward Elgin Cook led the team with four points coming from one 3-pointer and one free throw.

Carmen’s Crew, meanwhile, had a much more balanced attack offensively in the first quarter. Five players had at least two points.

Ohio State alumni take over in Elam Ending
Leading up to the Elam Ending, neither team could pull away. By the end of it, there were 14 lead changes and 12 ties.

But Carmen’s Crew was dominant in the Elam Ending, finishing the game on an 8-0 run, including a pair of free throws from William Buford to secure the championship.

Nearly repeating the first quarter, Golden Eagles Alumni shot just 30 percent in the last quarter and were 3 for 8 from beyond the arc.

“We fell short and these types of game always come down to the end,” Golden Eagles Alumni guard Travis Diener said.

“The Ohio State fans came out. Marquette fans were on par,” Carmen’s Crew assistant coach Evan Turner said.”More and more alumni teams come out, and then it’s going to be even bigger. A lot of people want to support (their alma mater).”

Despite a disappointing loss for the fourth consecutive year, Marquette alumni still stayed positive about the possibilities of next year’s TBT.

“I think we represented our university well,” Diener said. “So we should be proud of what we accomplished.”

“Every year I try to get out and do it,” Wilson said. “Do as best I can and see what comes of it.”