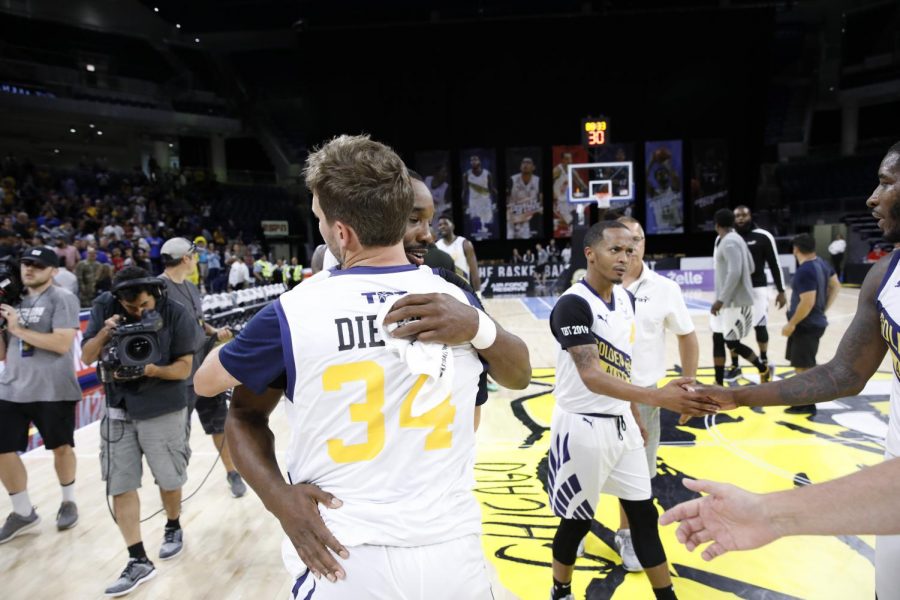 Travis Diener, 37, didn’t know if he’d be playing in the The Basketball Tournament after not playing the first few games in Wichita.

“Last Wednesday, I was with Maurice Acker and Joe (Chapman), and they were like, ‘Are you trying to come back and play?’ And I was like, ‘I’d love to play, and I’d love to be a part of (the team),” Diener said. “That night, Twitter was blowing up saying I was playing, so I texted Joe (Chapman) and said, ‘So I guess I’m playing?”

That decision made a big impact Sunday, as the 37-year-old hit the game-winning three in the Elam Ending to secure a 68-62 win over Team Hines send Golden Eagles Alumni to the TBT championship for the first time.

“I was pushing to get something right away, and they lost me a little bit. Once (I) saw what was happening, I was able to get a shot off,” Diener said. “Fortunately for us, it went in.”

It was a back-and-forth matchup throughout the first two quarters, as the Golden Eagles trailed Team Hines 41-39 heading into halftime. MU shot just 21% in the first half from the 3-point line and did not score in the final three minutes of the second quarter.

It remained a tightly contested matchup, with 22 lead changes and 18 ties throughout the game. Marquette pulled away from Team Hines in the Elam Ending with an 8-2 run.

“(The) guys knew going in that we had to play well and stick to our principles,” coach Joe Chapman said. “It worked out today.”

Elgin Cook earned a double-double and led the way for the Golden Eagles with 21 points on 9-for-15 shooting and 10 rebounds.

“I just wanted to play hard, be active and get on as many loose balls as I can,” Cook said.

The Marquette alumni shot 41% from the field and went 10-for-31 from beyond the arc.

Team Hines’ namesake Kyle Hines led his team with 12 points on 5-of-10 shooting.

The Golden Eagles have gone farther each year since joining the TBT in 2016.

The Golden Eagles will face Ohio State’s alumni team, Carmen’s Crew, in the championship game at Wintrust Arena Tuesday at 8 p.m. Central Time. The game will be on ESPN.

It’s a rematch of the Marquette alumni’s loss to the Ohio State alumni two years ago.

“It’s going to be a good battle, and a great atmosphere,” Chapman said. “I hope all of our fans make sure that they’re ready.”