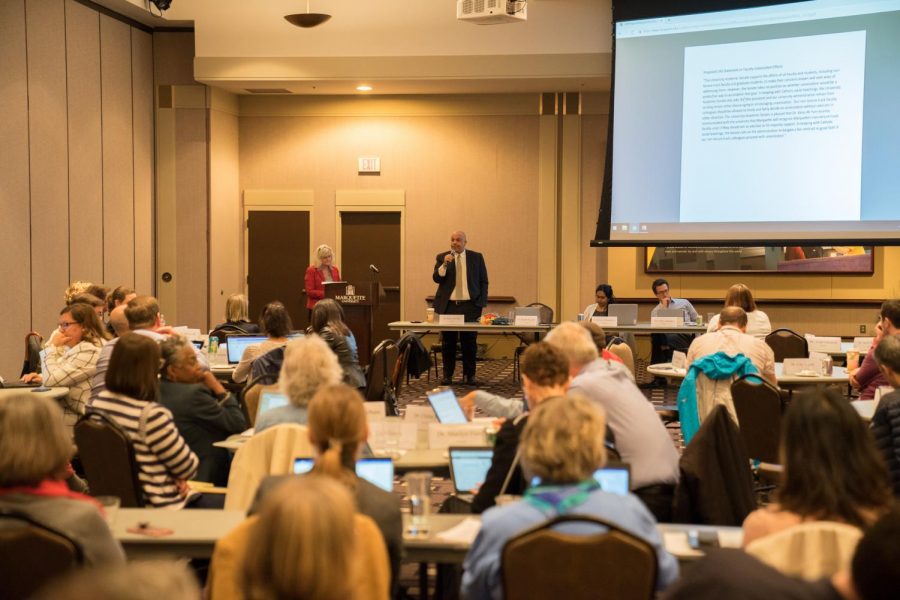 The senate, composed of faculty from each college, created a statement that “supports the efforts of all faculty and students, including non-tenure-track faculty and graduate students to make their concerns known and seek ways of addressing them.”

“However, the Senate takes no position on whether unionization would be a productive way to accomplish that goal,” the statement said. “In keeping with Catholic social teachings, the University Academic Senate also asks that the president and our university administration refrain from sending emails either discouraging or encouraging unionization. Our non-tenure-track faculty colleagues should be allowed to freely and fairly decide on unionization without coercion in either direction.”

The statement said the University Academic Senate is pleased Acting Provost Kimo Ah Yun recently communicated with the university that Marquette will recognize Marquette’s non-tenure-track faculty union if they should win an election or hit majority support.

“In keeping with Catholic social teachings, the Senate calls on the administration to bargain a fair contract in good faith if our non-tenure-track colleagues proceed with unionization,” the statement said.

Chris Gooding, a lecturer in the College of Arts & Sciences, was at the meeting. He said the statement concerns the organizers who are working with the Service Employees International Union to unionize at Marquette.

“This is very far from a statement that we embody Marquette’s Jesuit, Catholic values,” Gooding said. “The strongest stance in favor of a fair process would say that the university would sit down and negotiate with us on a democratic process that can lead to unionization. Let the contingent faculty members and graduate students decide themselves.”

Michelle Mynlieff, the chair of the University Academic Senate, said the point of the statement was to ask the administration to stay neutral.

“That was what we had started out with with this document, to stay neutral and to be fair,” Mynlieff said.

Mynlieff said the senate does not speak for all faculty. “I think it would be disingenuous for this body to come forward and make that kind of support statement that may not reflect all of the faculty viewpoints.”

Mynlieff said the senate is only asking the administration to be neutral and fair and not to give an opinion for the entire faculty at Marquette.

Mynlieff then continued to say this “is such a heated discussion.”

Gooding said the unionization organizers were not asking for an endorsement from the senate, but rather the senate to push the administration to allow the organizers to have a democratic process.

“Let us make the vote. Let us make the card check,” Gooding said. “We are at majority support and we have tried to present the petition, but Marquette hasn’t recognized that.”

Amber Wichowsky, an associate professor in the College of Arts & Sciences, attended the meeting.

“I’m really struck,” Wichowsky said. “Because I do think this is a representative body for faculty so I’m thrilled to see that these important issues are being deliberated here.”

Wichowsky asked what kind of statement should be sent and encouraged university leadership to respond to the non-tenure-track faculty and graduate students who are only asking for a democratic process.

“That’s it. They’re not asking for an endorsement one way or another but to ask the university to agree to a democratic process,” Wichowsky said. “So if this is reflective in a statement, the question is then, I would ask to our provost, ‘How would you interpret this statement then in terms of what comes next for a democratic process?'”

Ah Yun was at the meeting. He said that the administration has had conversations with organizers of the union efforts.

“I will say the commitment that Marquette holds, and continues to hold, we are committed to a fair process as established by government law. That’s our commitment,” Ah Yun said.

Ah Yun said there would be a task force that would take the summer to look at the issues and challenges and start conversations. Members of that task force include senate members.

Sam Harshner, an adjunct instructor in the College of Arts & Sciences, was at the meeting. He said everyone part of the unionization efforts at Marquette has been very clear and consistent with what they expect from the administration.

“We intend to democratically vote if we want a union or not, we’re not looking to force anybody’s hand,” Harshner said. “All we are asking for is there not to be voter suppression in that effort, that the university does not go ahead and undermine the effort of the coalition of workers and grad students and grad workers who have already signed this to deciding if they a democratic election.”

Ah Yun said the administration is looking to see what the challenges are and if they can handle them.

“We’re hoping to come to a point with whatever it is that we can achieve those,” Ah Yun said.

The senate voted in favor of the statement that was passed, but with eight abstention votes, meaning eight members of the senate did not vote.