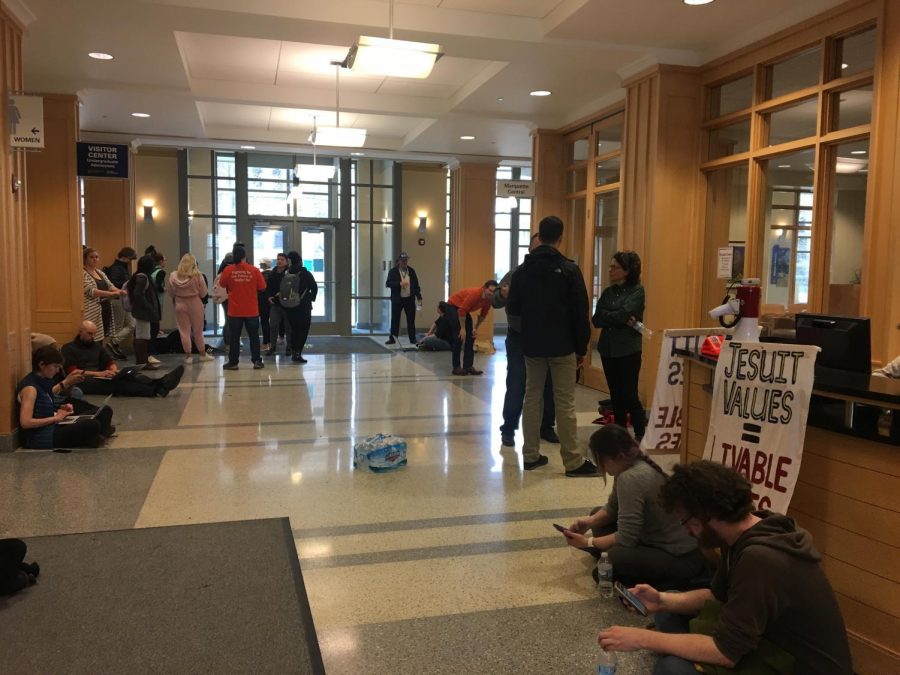 Faculty, students and community members sit in Zilber Hall awaiting for administration members to come out.

Marquette University faculty, students and community members gathered near the Father Marquette statue near Raynor Library this afternoon to ask university administration for a fair process to form a union.

A previous rally was held April 12.

“United we stand, divided we fall. An injury to one is an injury to all,” crowd-goers chanted.

Peter Rickman, president of the Milwaukee Area Service and Hospitality Workers Organization, attended the rally and said he stands in support of Marquette’s non-tenure-track faculty and graduate student workers to gain proper access to healthcare.

“I dedicate my time, my effort, my heart and my soul into this university and I deserve more. We deserve more,” Vickers said.

“We came to the administration building to deliver a statement asking the president or provost to sign it, calling for a fair process and for the administration to agree to respect the results of that process and to not raise legal or bureaucratic obstacles, like trying to misclassify grad workers for not having any collective bargaining rights,” Tom Hansberger, a lecturer in the College of Arts & Sciences, said.

Hansberger said the rally tried to present the statement to university President Michael Lovell, but was greeted by Marquette University Police Department officers, who “slammed the door in our faces and tried to lock the doors”.

A police officer on the scene declined to comment.

Hansberger said Ah Yun then sat down with three representatives from the rally.

The rally now sits in Zilber Hall, awaiting a comment from administrations about the statement.

“I asked if people would stand in with me and teach in and occupy the building until administration agrees to lets us practice our collective bargaining rights and to put that in practice,” Hansbeger said. “Rather than to say they are going to follow the law.”

Hansberger said non-tenure faculty and graduate students have been trying to set up appointments with President Lovell, but have heard no response.

Sam Harshner, an adjunct instructor in the College of Arts & Sciences, said all the rally is asking for is democracy.

“Letting the workers democratically decide upon whether to have a union or not is what we’re talking. We wouldn’t be doing this except for the fact that we are on short term contacts, we have adjuncts who have to work two to three jobs to make ends meet, and grad students without healthcare,” Harshner said. “The needs are strong enough that we know we need a union to advocate for ourselves and all we want from them is not to give us a union, but to allow us to have a democratic process in deciding if we want a union.”

Julia Floreani, a senior in the College of Health Sciences, attended the rally and followed the crowd to Zilber.

“I came out today because I believe in Marquette’s values as a Jesuit Catholic school,” Floreani said. “If Marquette is really for community values then shouldn’t that reflect in health care and fair wages?”

University spokesperson Lynn Sheka said in a statment that Marquette recognizes the lawful right of employees to unionize through the processes set forth in federal law, and will follow the law with respect to any union organization and election activities.

“Ultimately, the decision about whether or not to support the SEIU in their unionization effort is up to our non-tenure-track faculty,” Sheka said in an emailed statement.

Sheka said Marquette’s preference is to maintain a direct working relationship with faculty, without a third-party intermediary who does not share Marquette’s mission, history and commitment to offering a transformational education for students.

“Marquette’s current operating model of utilizing a mix of tenure-track and non-tenure-track faculty helps control costs, maintain flexibility and offers our students unique perspectives, while at the same time ensuring we are providing the highest-quality transformational education at a price that is competitive with our peer universities,” Sheka said in the statement.

The University Academic Senate Committee plans to discuss the matter of unionization this Friday, May 3 at its meeting.