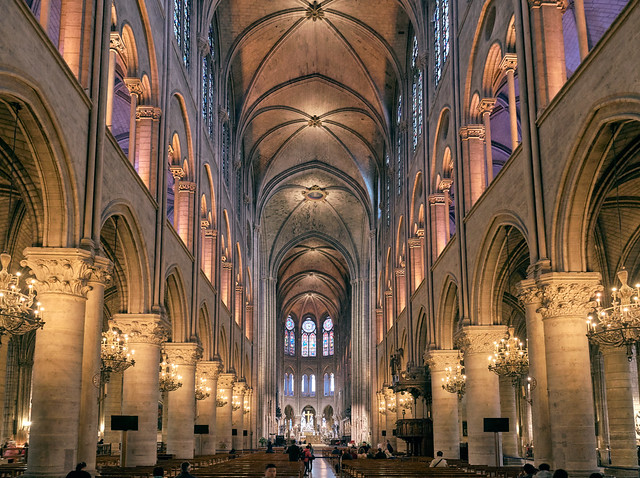 Social issues around the world are being overshadowed by the extensive support for Notre-Dame.

A catastrophic fire engulfed the historic Notre-Dame Cathedral,  one of the most iconic and historic landmarks in Paris, April 15. French citizens watched and mourned as their church crumbled to the ground in front of their eyes.

Notre-Dame is famous and significant for its architectural innovations, antiquity and beauty. The building itself is an architectural achievement adored and visited by many. Since the cathedral has such a historic and deep importance for so many people, it makes sense that the people of France and others connected to it were devastated that it was damaged. This was a very tragic situation, and  the people affected deserve to grieve.

At the same time, the Notre-Dame fire receiver much more media coverage than other disasters and injustices occurring around the world due to the violent oppression people experience in their homes. The cathedral is a Western landmark, and France holds a positive relationship with the United States. Since it is a catastrophe involving the West, it is bound to get more recognition than other calamities around the world. Although acknowledgment of Western events has always had more attention, this is not acceptable and should be modified by American media and society.

Palestinians are being murdered by Israeli Defense Forces, Chinese Muslims are being forced into detention camps and the people of Flint have died due to the lead that continues to reach their drinking water. These are just some instances of death occurring, some even in our own country, that the Western media and government denies attention. It is the responsibility of journalists and news corporations to ensure these kinds of issues reach the top headlines and the front pages. Just because a disaster does not directly affect the West does not mean help is not required.

Shortly after Notre-Dame began to burn, $339 million had already been pledged to help rebuild the cathedral. By the next morning, more than $1 billion was collected for repair funds, mostly donated by business owners. These are not just donations solely from the French, but people worldwide poured in money to help the restoration of the church. Charities, politicians and social media users alike began to question the rapid surge of attention and money directed toward the cathedral.

Head of marketing and reputation at the Henley Business School of the University of Reading  Adrian Palmer commented on the businessmen and billionaires that chose to donate to the repair fund.

“These brands stand for France and they sell around the world, so anything that puts the France brand at the center of people’s minds is going to help them,” Palmer said to who Thomas Reuters Corporation, a mass media and information firm. “It creates positive associations in people’s minds, that they are generous, caring and good.”

Nobody can definitively comment on the intentions of those who donated besides the individuals themselves. At the same time, their motives can be questioned. It is unclear why this particular situation caused them to donate this much money.

Some money from the substantial donations could have been allocated elsewhere to help those in our own country facing traumatic catastrophes. Similar support must be given to the sacred Native American lands that continue to be destroyed in fracking and other infrastructure developments. The historically African American Louisiana churches being destroyed by arson attacks also need attention and help. There are causes affecting the entire planet that are not receiving enough attention or financial aid such as climate change due to some people’s inability to accept the severity of these situations.

Even within France, some French citizens said the substantial amount of money raised would be better used to help decrease French poverty. Homelessness has increased by 21 percent in Paris, and President Emmanuel Macron of France continues to ignore this issue. According to The Washington Post, the leader of the General Confederation of Labor trade union Philippe Martinez commented on the support for Notre-Dame and said, “If they can give tens of millions to rebuild Notre-Dame, then (the government) should stop telling us there is no money to help with the social emergency.”

People do not have to choose sides, and they are not constrained to only support one cause. Notre-Dame is an important landmark for some, so it makes sense that those affected want to fix it. At the same time, other pressing issues affecting the lives of many individuals cannot be brushed aside. Their problems cannot move down the priority list. Rather, resources must be allocated better to help those in need.

After this catastrophe, it is clear that funds and support needed to solve other global issues are available – they are just not being properly distributed.