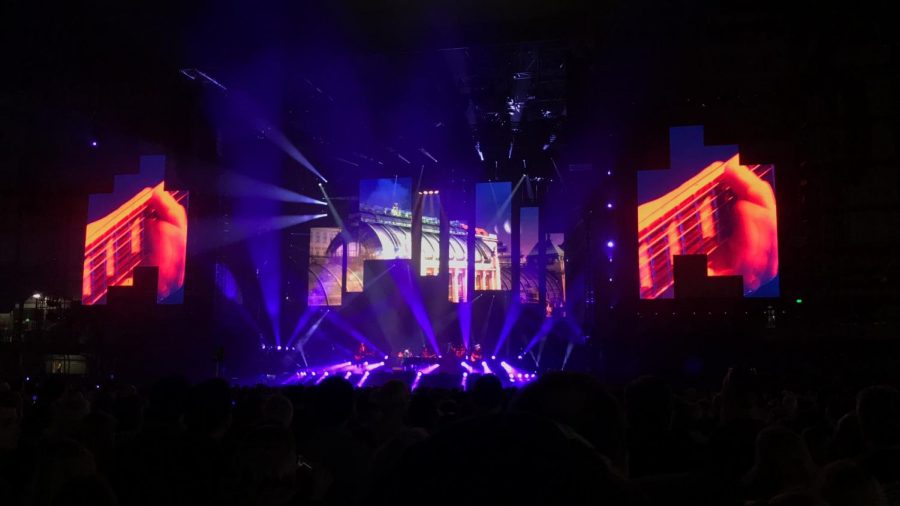 Glass Houses contain’s one of Joel’s most eclectic songs: “It’s Still Rock and Roll to Me”; one of the many hits produced over the singer’s discography. Also, one of the many songs he performed at Miller Park – his only Midwestern show of 2019.

The 69 year old ‘Piano Man’ performed the hits last night in his first Milwaukee show in 11 years. That makes this concert so much more special, especially for Joel, who’s last album was released 26 years ago in 1993. Joel packed the stadium full, rivaling the crowds of a post-season Brewer game.

Joel’s set list consisted of 22 songs, including four encore songs. The songs ranged from “We Didn’t Start the Fire” to a cover of AC/DC’s “Highway to Hell” by one of Joel’s roadie’s named Chainsaw.

The concert contained all the Joel hits: “Vienna,” “Movin’ Out (Anthony’s Song),” “Piano Man,” “Uptown Girl” and “The Downeaster Alexa” and some of his lesser known songs too. It wasn’t strictly all Billy Joel songs; besides “Highway to Hell,” Joel performed the Eagles “Take it Easy” and Joel’s backing vocalist and guitarist Mike DelGuidice performed a rendition of Giacomo Puccini’s “Nessun Dorma”.

As a intermediate listener of Joel’s music, I was blown away by his powerful vocals, especially for a man of 69 years. I thought I was going to be one of the only young people in the audience, having to be surrounded my Baby Boomers or Get Xers. I was proved wrong. Surrounding my dad and I were people the same age as me, give or take a couple years.

This made me think. What makes Joel’s music so enduring (besides the fact that Joel has a killer voice)?

It’s the message in the songs.

You can see it clearly in “Allentown”; a song about the closing of the coal mines in Allentown, Pennsylvania. While the song was released in 1982, the same story persists to this day. The same coal miners Joel mentions in “Allentown” are now assemblers from closed down manufacturing plants, and in a sense, America can be called an “Allentown.” With the exportation of American manufacturing to other countries, wage stagnation, and the still present effects of the 2008 Recession, Americans still feel left behind. They long for the same economic prosperity previous generations had, which Joel mentions. The song itself is a little gloomy, but it ends on a positive note; Joel sings the final words: “But it’s hard to keep a goodman down/We’re living here in Allentown.”

Another song is “Downeaster Alexa,” which speaks about overfishing and increasing tourism in the Atlantic Northeast. The song is about a man who own a downeaster (a small sailing ship) named Alexa trying to make a living catching fish. However, the line: “More and more miles from shore every year/Since they tell me I can’t sell no stripers/And there’s no luck in sword fishing here,”  shows that constant overuse of the water has depleted reserves of fishes. In the final stanza of the song, the lyrics: “Can’t make a living as a bay man anymore/There ain’t much future for a man who works the sea/But there ain’t no island left for islanders like me,” it seems that tourism and commercialization of the coastline has further decimated the man’s business. That’s where the song ends, ambiguous. It is unclear what happens to the fisherman, although his fate is implied. As we face a time where climate change threatens sea life, the rollback on fishing regulations, and further tourism along all of America’s coastline, this song only gains relevance.

And that’s why Joel’s music endures to this present day. His message about problems in the world, teen angst and just general life problems resonate with each and every one of us.