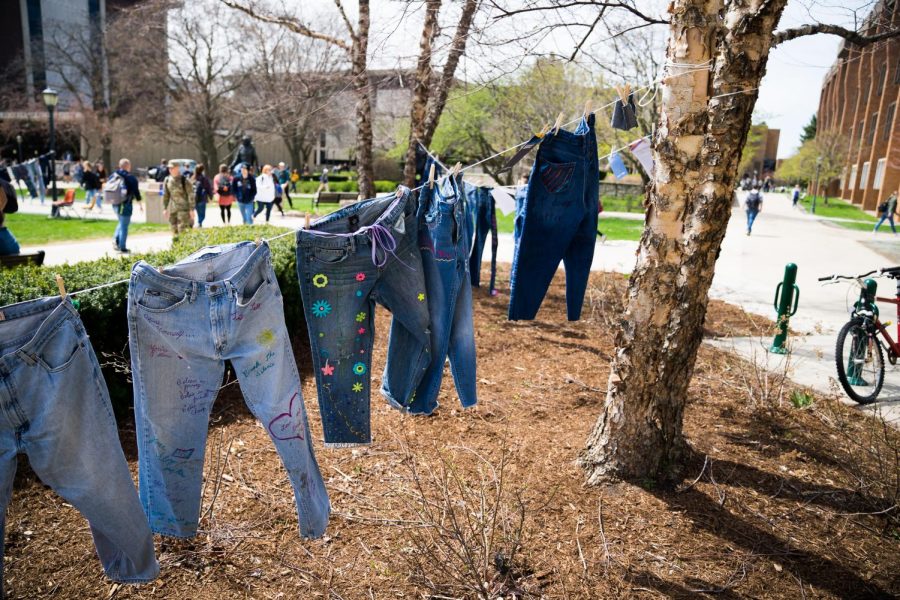 Pairs of jeans, donated and decorated by students, re in central mall for Denim Day.

The other pairs of jeans, donated and decorated by students, hung in Central Mall where there were informational tables for various Marquette resources on campus, like Campus Ministry, Marquette University Student Government and the Counseling Center.

The Denim Day campaign was started 19 years ago by Peace Over Violence, a nonprofit feminist organization in California,  according to a Marquette University news release.   It started in response to a ruling by the Italian Supreme Court where a rape conviction was overturned because the victim was wearing tight jeans. It was decided by the judge the victim must have helped her rapist remove her jeans because they were tight, thereby granting consent. Denim Day is a symbol of protest against erroneous and destructive attitudes about sexual assault.

Marquette hosted Denim Day decorating parties throughout the month of April to decorate the jeans that were on display in the Central Mall.

Marie Gribbin, a sophomore in the College of Arts & Sciences, said she believes Denim Day is an opportunity to rally people together to support sexual assault survivors.

“Sexual assault awareness is something that is everybody’s issue because it happens everywhere to anybody,” Gribbin said.

Gribbin and other students in the Panhellenic Association had a table where anyone could pick up a marker and write an inspiring message on a strip of denim. The messages were pinned to a board, which was given to Sojourner Family Peace Center, a Wisconsin nonprofit that provides domestic violence prevention and intervention services, according to its website.

Rayne Trangsrud, a junior in the College of Arts & Sciences and a program assistant for Sexual Violence Prevention and Education at Marquette, said  many students were interested in her table and others when they passed by.

“People are very engaged and are like, “Why are all these jeans hanging up?” Trangsrud said. “(Denim Day) is very important because it shows survivors and everyone on campus that if this happens to them, there is support here on campus.”

Sarah Parsons, the Women’s Innovation Network coordinator, had a table for the organization to show her support as an advocate because of the trauma sexual assault survivors experienced.

“All of the feelings that can come from being a victim of this can be the very things that keep you from being great,” Parsons said. “You can’t flourish in your classes and flourish in life when you’re carrying all of this negativity.”

Parsons said Denim Day was a valuable experience because the students seemed interested in the different resources, and they learned more about sexual assault and survivors.