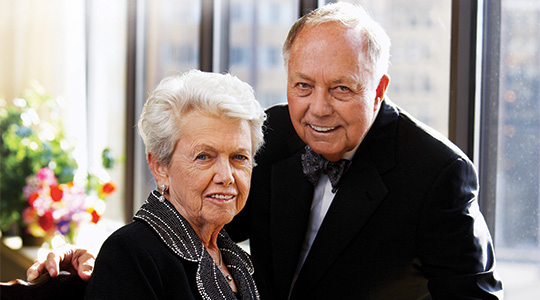 Ray (right) passed away Saturday. He was 93 years old.

Eckstein passed away in his home in Paducah, Kentucky at the age of 93. He is survived by four daughters, two sons, 28 grandchildren and 38 great-grandchildren.

During his second year at Marquette, Eckstein met his wife Kay, who also earned her bachelor’s degree at Marquette. They were married for nearly 69 years until Kay’s death in 2017. Together, the couple established the Ray and Kay Charitable Trust in 2005, where they made charitable contributions to faith-based initiatives that provide educational endeavors to sustain vibrant communities.

Recent major gifts to Marquette included support for the E. J. O’Brien Jesuit Residence in 2014 and the construction of the new residence hall, The Commons, in 2017. The couple also played a key role in funding the Al McGuire Center.

In 2007, the Marquette University Law School was named after Ray and Kay due to charitable gift they made to the university when their granddaughter Kelly Erickson graduated in 2006.

“My wife and I have many fond memories at Marquette,” Ray Eckstein said at the time of the donation. “It was the place of our meeting and courtship, and the beginning of our wonderful life together. Catholic, Jesuit education has played an important role in our lives.”

At the time of the donation, Eckstein said he and his wife were thrilled to be able to provide the law school with the foundation of a new building so future students can have the opportunity to benefit from the education he and his wife had.

“Ray Eckstein was a very proud ‘Marquette lawyer’—with emphasis on both parts of that phrase,” Joseph Kearney, dean of the Marquette Law School, said. “He knew from firsthand experience the difference that a legal education could make, not only in representing clients in practice but for one building a business. He also was a big believer in Marquette University and the Catholic, Jesuit educational tradition. His loyalty and generosity were inspiring.”

“Ray and Kay Eckstein transformed lives,” Kearney said in a news release. “Most obviously, they led the way to support Marquette University’s construction of Ray and Kay Eckstein Hall, an extraordinary resource in this region and widely recognized as the best law school building in the country.”

Kearney said Ray and Kay’s confidence in the leadership of the University and the Law School with respect to the building project—and in the work that future generations of students would do with their Marquette Law School education — remains humbling to those who knew him.

“I have no doubt, (he) will continue to inspire our community in the future,” Kearney said in an email.

In April 2008, the Ecksteins received a National Alumni Award from the university. As of 2008, their $51 million gift was one of the largest to an American law school, and the largest individual gift to a university in Wisconsin.

“Ray Eckstein was an extraordinary businessman, a brilliant visionary, a devoted father, a beloved husband, a man of deep faith and a game-changing force who helped shape Marquette into the institution it is today,” Marquette University President Michael Lovell said in a news release.

Lovell said he had the chance to visit Ray and Kay during the early stages of his presidency at their home in Paducah, Kentucky, to thank them for their role in transforming Marquette’s campus.

“During our conversation, I was moved by Ray’s humility and gratitude for his Marquette education, which is where he met the love of his life, Kay,” Lovell said in the news release. “The Marquette community has lost a bright light, and we extend our prayers and deep condolences to Ray’s family, who meant so much to him.”

Marquette University Assistant Dean for Development John Novotny said in the news release that Ray always put God and family first above all else.

“Ray was an amazing man, who among his many qualities had a wonderful love for life and spirit of perseverance second to none,” Novotny said in the release.

Kearney said he admired Ray for many of his qualities.

“Some of them were especially part of his professional life: his focus, his efficiency, his risk-taking. Others were more on display in his personal life: his faith, love of family, and gratitude to Marquette,” Kearney said in an email. “And still others could be seen just about wherever Ray was found and whatever he was doing: from his humor to his curiosity to, most generally, his embrace of life and all its possibilities. I will miss him.”