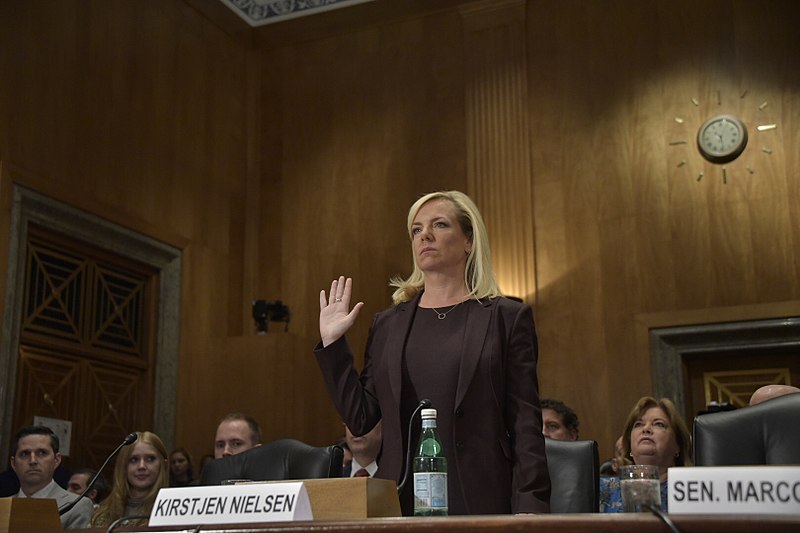 Nielsen feared the backlash she would receive for her contentious border policies, like family separation.

Kirstjen Nielsen announced April 7 she is leaving her position as head of the Department of Homeland Security on. She hesitated resigning from the job for some time due to the retaliation and consequences she would face from the American public for supporting President Donald Trump’s inhumane and evil policies as reported by people close to Nielsen. She was fearful of what her future would entail after resignation.

Nielsen is most known for to Trump’s brutal policy of separating families at the Mexican-American border. Although she was not the one to directly engage in the horrendous action of splitting up Mexican families, she should be known as the one who enforced the order. This means she is responsible for placing children in cages and denying them their basic human rights.

Nielsen, as well as other DHS and Immigration and Customs Enforcement officials, must be held accountable for traumatizing these children and their families. She contributed to the permanent damage that immigrants and refugees must now live with for the rest of their lives. The process of moving into the United States and crossing the border is already difficult enough as it is. Nielsen, along with many other people, made this process even harder and more disturbing. She oversaw a corrupt section of our government and is a central part of the racist immigration system that is perpetuated by the Trump administration.

On top of carrying out Trump’s atrocious policy, it is also believed that she committed perjury in front of the FBI when questioned about family separation statements. The memo that outlines how the Trump administration plans to deal with illegal immigration at the border was released by the DHS and the Justice Department in 2017. One of the items on the list is a policy to “separate family units.” During Nielsen’s testimony last December, she continued to deny this point said, “We’ve never had a policy for family separation” in front of Congress. Despite her claims, the government separated almost 3,000 children from their parents in the last year due to the new policies on illegal immigration. Earlier this year, new reports emerged from the Department of Health and Human Services that stated previous reports miscounted and thousands more children have been identified as being separated from their guardians since Trump became president.

The fact that Nielsen did absolutely nothing to stop these actions and prevent the obstruction of immigrants’ basic human rights shows how evil she truly is. She also failed to create a system to track the locations of the children who were forcefully taken away. Now, the Trump administration says it could take up to two years to correctly identify these children and find their families.

Nielson must face just consequences so other administrators and officials under Trump can understand there are repercussions to blindly following Trump’s policies and continuing to infringe upon basic human rights. She should not be allowed to leave her position with ease. Those who understand the horrendous actions she took part in must make the effort to ensure she does not have the chance to gain a new high corporate position or esteemed appointment anywhere else.

Restore Public Trust, a campaign group, was formed to promote a petition to corporate America. The petition requested individuals to blacklist senior executives in the Trump administration, including Nielsen. Karl Frish, a spokesman for the progressive coalition, made a statement about Nielsen and said, “Allowing her to seek refuge in a corporate corner office or a boardroom, university, speaking agency or elsewhere poses a significant risk to the reputation of those involved.”

American citizens must make a decision on whether they believe it is acceptable to support and hire someone who has terrorized children. The correct answer would be to not support those officials who have such a disastrous past. Although there are countless corporations and businesses of elite America with power, it is more reasonable to put the responsibility in the hands of the American public. More individuals must defy this kind of inhumane behavior and step up to make the change.