Hulsman leads team to success after transferring from Bellarmine 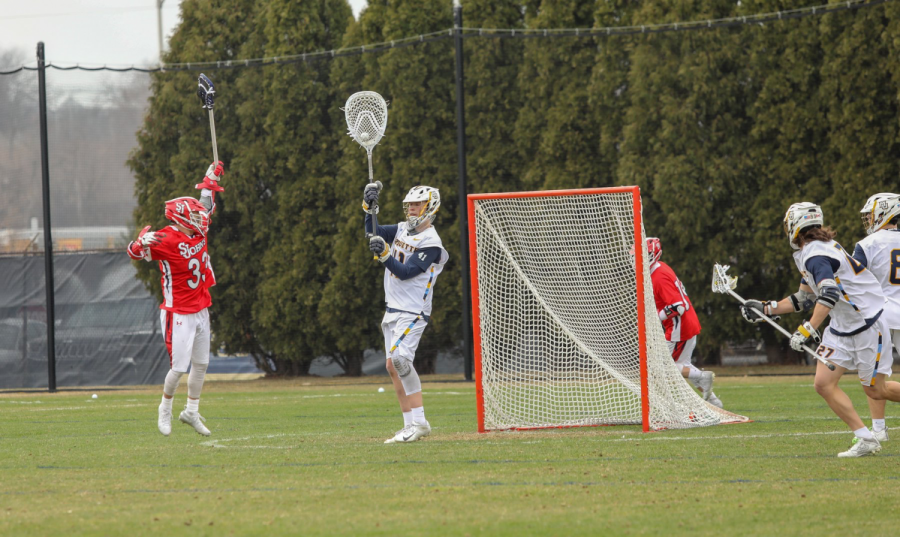 There was a burning question at the beginning of the men’s lacrosse season: Who will replace graduated goalkeeper Cole Blazer?

“He is our starting goalie right now, and he will be given a longer leash because he’s proven that he deserves that,” Amplo said.

Amplo’s interest in Hulsman sparked after Bellarmine defeated Marquette 7-6 in overtime last season. Hulsman also attracted attention after accomplishing various accolades during his freshman year. He was selected as an All-Southern Conference at goaltender.

“When someone is one of the top goalies in the country statistically and also shuts the door against you in a game, you look at him,” Amplo said.

Hulsman is friends with sophomore Anthony Orsini, who Hulsman said played a huge role in his decision to transfer.

“The main reason (I transferred) was probably Anthony and all the great things he had to say about the school,” Hulsman said.

Hulsman said Orsini helped significantly in the transition to Marquette.

Hulsman made his debut as Marquette’s goalie in a game against Bellarmine earlier in the season.  He notched six saves against his old team, and Marquette came out with a 15-9 victory.

“It was fun playing them and seeing them again, and it was also good that we beat them,” Hulsman said.

The 6-foot-2 sophomore from Baltimore has only improved from there.  He has made a name for himself after he earned BIG EAST Defensive Player of the Week with 12 saves against Georgetown and received a spot on the BIG EAST Weekly Honor Roll with his 15 saves against St. John’s.

Marquette captured a 12-8 win over St. John’s on senior day, which was credited to Hulsman’s acrobatic saves and consistency between the pipes.

“We all wanted to come out and play for (the seniors) and get the win for them,” Hulsman said.

Amplo said Hulsman has adjusted well to the overall transition to Marquette, but there are still areas where he could improve. He said Hulsman needs to watch the five-hole, which is the area between his legs that shots could pass through.

“He has to make sure that there’s a big toll booth out front, and no one else has the token to get past him,” Amplo said.

Hulsman recognized his need to become more consistent and has created substantial goals for the rest of his Marquette career. He said he plans to win BIG EAST and NCAA titles.

His need for Marquette men’s lacrosse goes beyond his spot in the cage. His goofy charm has helped his team and led to an odd nickname for him: “Beans.”

He needed a nickname to differentiate himself from John Wagner, who has the same first name.

“We were at dinner one day, and they were like, ‘We can’t keep calling you Johnny; it’s too annoying,’” Hulsman said. “One of the guys on the team was like, ‘You’re Beans.’ And ever since he said that, it stuck.”

Coach Amplo said “Beansy” has been a excellent addition to their team.

“I walked in the locker room on Saturday after we won (against St. John’s), and he had his shirt off and he was dancing,” Amplo said. “If that is any indication of how he is off the field, I think he’s having a good time here.”