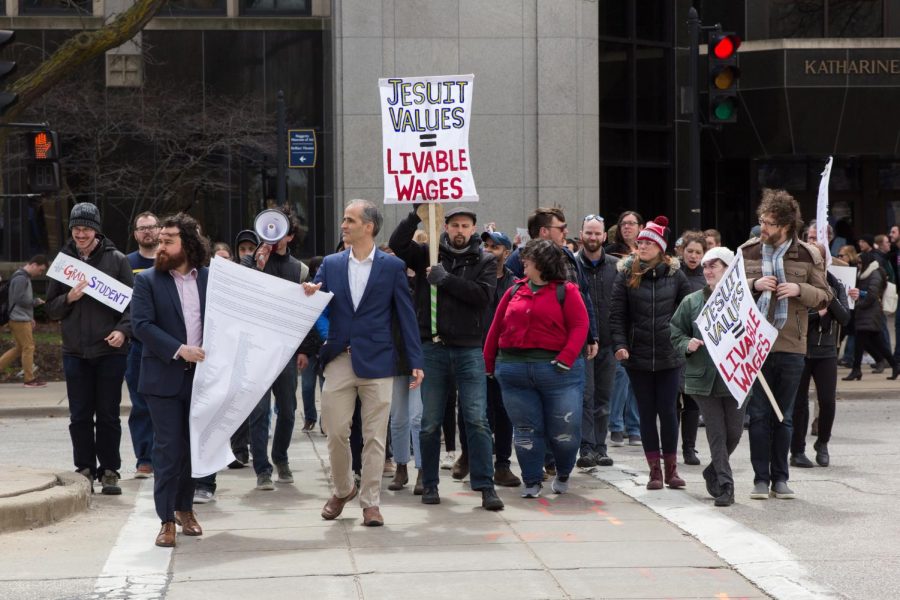 Participants part of the rally to form a union walk to Zilber Hall to submit signatures.

Marquette University non-tenure faculty and graduate student workers rallied at the Father Marquette statue near Raynor Library this afternoon to ask university administration for a fair process to form a union. They were joined by members of the Marquette and Milwaukee community for support.

“This came about through basic conversations from non-tenure-track faculty and grad students. Grad students lost their access to healthcare three years ago,” Sam Harshner, an adjunct instructor in the College of Arts & Sciences, said.

Harshner said non-tenure faculty and graduate students have been trying to form a union on their own.

“We’ve been working for the past six to seven months in getting support and we have majority of support from most graduate students and non-tenure faculty,” Harshner said. “Today we asked the administration for a fair process to win our union.”

Faculty Forward, part of Service International Employee Union, supported the rally. SEIU has 57,000 faculty and graduate student workers on 60 campuses who have joined the Faculty Forward movement and formed unions, according to its website.

Upon arrival, participants were locked out and Marquette University Police Department guarded the doors.

“I’m a little bit dismayed that the university is not allowing us to get in the doors,” Robert Riordan, a graduate teaching assistant in the College of Arts & Sciences, said. Riordan participated in the rally and went to Zilber Hall.

“Before I came here, I taught as a non-tenure-track faculty at a University of Wisconsin college, and all of us have multiple extra jobs and it’s horrible. It degrades the quality of education students can get,” Riordan said.

Moments later, acting provost Kimo Ah Yun approached the crowd. Ah Yun said he has been talking to the University Academic Senate, a committee that discusses immediate academic and professional importance upon collective experience of faculty.

“(University Academic Senate) supports the faculty. We’ve been talking about putting a statement out on Monday, driven by faculty, to say that both faculty, non-tenure and tenure, and administrators, should remain impartial in this process,” Ah Yun said.

When asked if there would be a fair process, Ah Yun said, “We will work with everyone.”

“They granted us neutrality, meaning they will not fight us anymore on our unionization efforts,” Harshner said after Ah Yun spoke. “So we will be going forward in the fair process to formalize a non-tenure-track and grad student medium.”

University spokesperson Chris Stolarski said in a statement that Marquette respects the lawful right of employees to decide whether they wish to be represented by a union.

“Ultimately, the decision about whether or not to support the SEIU in their unionization effort is up to our non-tenure-track faculty,” Stolarski said in an emailed statement.

“Our preference is to maintain a direct working relationship with all of our faculty, without a third-party intermediary who does not share our mission, history and commitment to offering a transformational education for students,” Stolarski wrote in the statement.