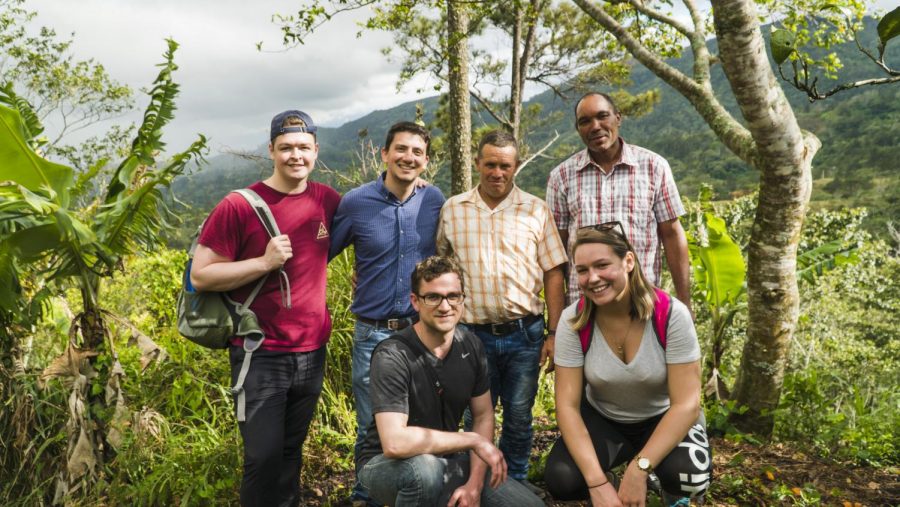 Vida, one of the subsidiaries of Blue & Gold Ventures, Inc. and the student-run business program at Marquette University, will receive the keys to Vida’s first coffee shop in the next few weeks, Kat Djokic, a junior in the College of Business Administration and president of Vida, said.

She said the shop will open in West Allis, hopefully within a month. They had also recently bought a coffee cart, which they took to a conference at Harvard University. Up until recently, the business has been strictly wholesale, selling coffee beans to shops across the nation, as well as other universities and institutions.

“It had done pretty well, but it started losing money about the time that I got here last year, so we pivoted a little bit and kind of restructured the brand, brought it back to life as Vida,” Raisch said. “Now we’re going in a somewhat different direction by pushing these retail stores, which enable us to do a lot more volume and sales, to work with a lot more people, and to deepen relationships with the actual farmers that are producing the coffee.”

Over spring break, some members of the business took a trip to the Dominican Republic to see where their beans are sourced, and meet some of the farmers.

“We’ve been working directly with the farmers in Franco Bido, which is a village in the Dominican that we work with, to make sure that our coffee is sourced ethically, that the workers are paid fairly, that it maintains that specialty coffee mark,” Djokic said.

Andres Isidoro, a junior in the College of Communication and chief marketing officer for Blue & Gold Ventures, said he does photography and videography for the company and went to the Dominican with Vida to capture the trip.

“They wanted me to come document the whole experience,” Isidoro said. He also said he is using the footage from the trip for commercials, and the pictures for their coffee bean bags.

Isidoro said he found the trip very eye-opening knowing that there’s a community of farmers who have a passion for their farms and what they do, but are not always properly compensated.

“That’s everything they do, day and night, knowing they’re not making money off of it and they’re actually in debt due to their farm was shocking because coffee is a big consumption in a lot of places, but … their government doesn’t look out for them,”Isidoro said.

Djokic said Vida was built upon a certain vision she had.

Djokic said coffee brings people together and slows down time, because she said she feels like America is so fast-paced.

Djokic said she also wanted the coffee shop to be a way to connect people with each other and to connect communities. She said that was one reason they work directly with farmers in the Dominican Republic to offer specialty coffee to their consumers.

“The trip was really to learn more about coffee and to understand the people behind the harvesting and the sourcing of the coffee, and then also to understand how our purchase the consumer’s purchase of our coffee impacts these communities,”Djokic said. “This village is a coffee community, and it’s slowly vanishing because people are going to large-scale coffee farmers instead.”

Raisch, who took the students on the trip, said the students got to see how deeply impacted the global economies and communities are impacted by businesses like Vida.

“We met the farmers, and they started developing relationships to help maintain quality control for the coffee, to understand the communities and how they’re impacted by the coffee that we produce,” Raisch said. “It’s our direct-trade relationships that enable them to keep maintaining these farms and producing the high-quality coffee that we want to be able to sell, because that’s what you need in order to do specialty coffee.”

While the first location will soon open in West Allis, two more will open in Franklin, Wisconsin and Greenfield, Wisconsin in the near future.

“So we’re opening our first coffee shop in West Allis, and that one we’ll use as our startup location, it’s kind of an incubator,” Djokic said. “We’re using it to train people. We’re serving coffee but it really is our first space that we’re using to start up our whole image.”

Djokic said opening three coffee shops within 16 months is a large feat. She said that most coffee shops, if they are successful, open that many within the span of several years.

“There’s so much more to a coffee shop than just opening it. In fact, the physical space is not the least of my worries by any means because it’s a big deal, but there’s so much preparation that goes into it that,” Djokic said. “It’s helpful that we’re really secure and we really know what we want and the vision that we have and who we are. That really helps because then you’re just able to apply it to different locations.”

She said that while Vida is a coffee shop by day, it will be a wine and beer bar by night.

“It’s more common in Europe, and it’s starting to become more popular on the east coast, but it hasn’t really come around here,” Djokic said. “People can expect a really wholesome good time, and they can expect to know exactly where a lot of the products come from. When we open the doors to Vida, people can expect a chic, inviting, lively environment.”