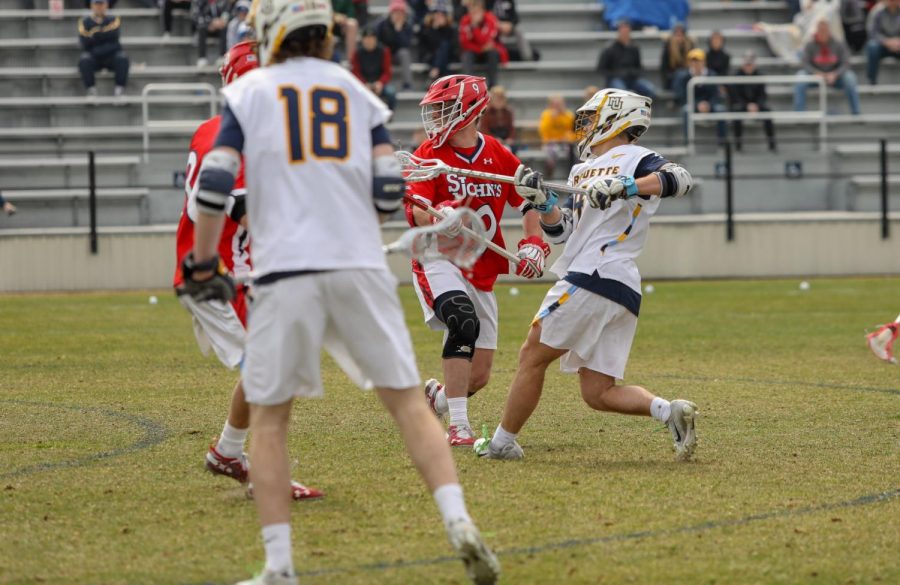 The Golden Eagles fell behind 4-2 after the first quarter but went on to go on an 8-0 run in the second and third quarters and never relinquished the lead after that.

“Those were some of my favorite moments of this year,” Amplo said. “Our team responded to guys like Luke Vassos and Mikey Zadroga and Colin Strange who have done so much for this program, and those guys just want them to have a big moment on their Senior Day.”

“We got the ball behind the net more than usual. That spreads the defense out and then on the backside, there’s no slide guy coming from the middle,” redshirt senior Tanner Thomson said. “Spreading the defense really was key.”

“Johnny Hulsman stepped up in that first half and made up for some mistakes, and Thomas Washington had his day at the faceoff X,” Amplo said. “Those two players stood out and allowed us to look like what we potentially could look like if we played a complete game.”

“The faceoff game and Johnny Hulsman allowed us to be more aggressive than we were in the past because we didn’t play as much defense as we have (had to play),” Amplo said. “When we did have breakdowns, Johnny was right there to make some really big saves.”

For St. John’s, Colin Duffy had five goals, while Joe Madsen had two goals and an assist. Brody Agres had 13 saves and allowed 12 goals.

“(Senior Day) went exactly how I would’ve wanted it to go,” Thomson said. “No better way to go out.”

Marquette (6-4, 2-1 BIG EAST) will take on No. 9 Notre Dame in a non-conference matchup Wednesday night.