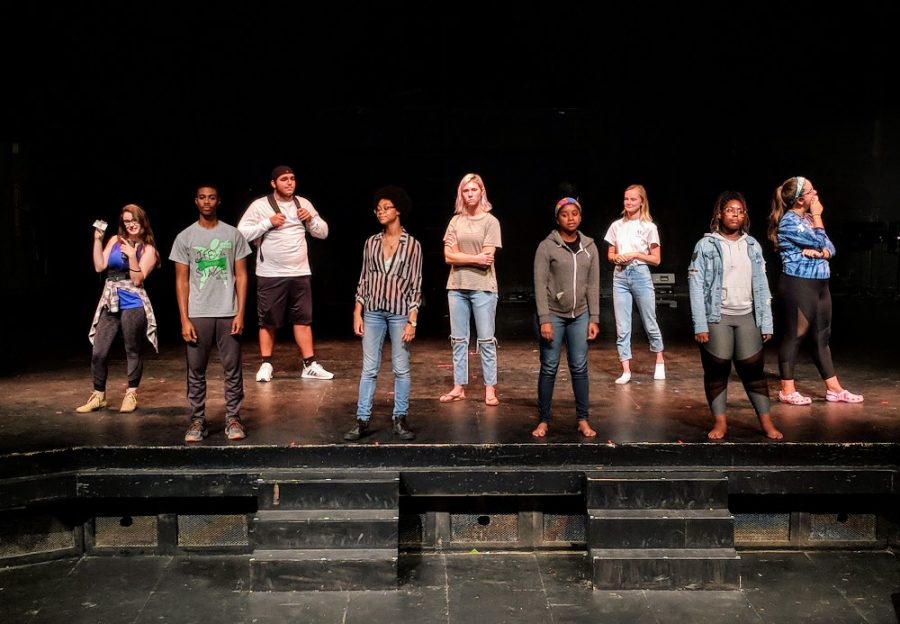 The theater production was previously selected to perform at the Region III Kennedy Center American College Theater Festival in Madison Jan. 10 and Jan. 11.

The Citizen Artist Fellow Recognition was established in 2016 to celebrate emerging artists across the country who utilize their art form for positive impact on communities, according to the Kennedy Center for the Performing Arts Website.

“Nominations can be made for an artist, teaching artist, social entrepreneur or other individual who embodies community connection, impact and at least one of the ideals attributed to the work and life of John F. Kennedy (service, justice, freedom, courage and gratitude),” the Kennedy Center website said.

“I think this play addresses a very important issue and needs to be seen by a greater audience,” Debra Krajec, director of “White Privilege,” said. “The whole issue of white privilege is very controversial, and most people don’t really know what is meant by it and where that idea has come from.”

Krajec said the play does a good job of explaining it from a person of color’s perspective.

“I know the first time I saw (“White Privilege”) I was kind of shocked because I had no idea (about white privilege), so I do hope there is a life for this play beyond Marquette,” Krajec said.

Moore said she was thrilled to receive news of the award.

“I was super excited when I woke up to the email from (scenic and production designer) Stephen (Hudson-Mairet) and others who sent me texts informing me something good had happened,” Moore said. “I didn’t know much about the award because it wasn’t one I applied for, but from what I have researched, I could not be more happy to be recognized for the activism in my work and that the play is being acknowledged nationally.”

Hudson-Mairet, also an associate professor of digital media and performing arts, said there is a national committee that attends each of the eight regional festivals and select the awardees for the different categories.

Gregg Henry, artistic director at Kennedy Center American College Theater Festival, said there’s no nomination process. The award recognizes work showcased at regional festivals that stands out as an example of theatre programs taking their civic duty very seriously and ensuring that theatrical production is part of the urgent conversation of this nation.

“Malaina’s play, her actors and creative team, did … and are doing … important work and it’s important that Marquette is congratulated for supporting it,” Henry said.

The award is recognition of the emphasis that Marquette Theatre has in using theatre to address social justice in the  community Hudson-Mairet said.

“I could not be prouder of Malaina Moore, all of the students involved in every aspect of the production, and the faculty, alumni, staff and professionals that have supported the development of this play through their artistry and financial support,” Hudson-Mairet said in an email.

He said this award reflects and reinforces the mission of Marquette Theatre, the Phylis Ravel Social Justice fund which supports student work and initiatives that serve social justice themes and Marquette University.

“At this point, Malaina is exploring ways to get the play published and distributed,” Hudson-Mairet said in an email.

Krajec said Moore is considering some tweaks and hopes to find a publisher. The department has had numerous requests to do the play for other groups, but that has not proved possible at this time due to summer approaching.

Moore said she hopes to continue performing and telling stories.

“I will continue to write, mostly revolving issues of social justice and the experience of minority groups in America,” Moore said. “I’d also love to direct shows, too. Eventually, I want to open a theater company with an education component for inner city kids wherever I end up migrating.”