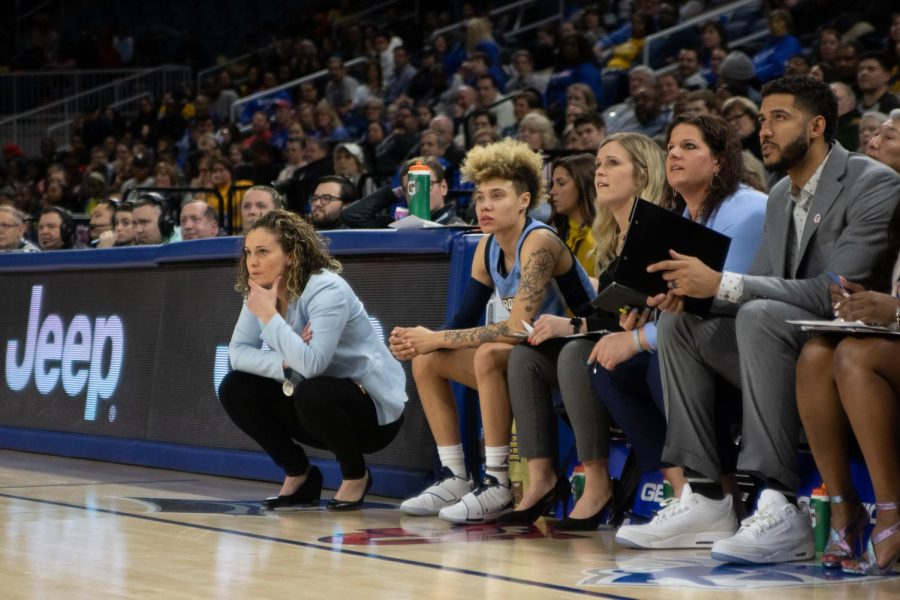 Kieger’s departure came after taking the Golden Eagles to three NCAA Tournament appearances in five seasons. It was the first time MU went to the tournament in consecutive years since the 1999 and 2000 seasons. She posted a 99-64 record while coaching at her alma mater.

“It’s incredibly hard,” Kieger said. “I love Marquette. I love the people. I love the players. I love the administration. Marquette will always be me. … This is probably the most difficult thing I’ve ever done in my whole entire life.”

The 35-year-old coach said taking the Penn State job would move her closer to her goals of winning a national championship.

“Personally and professionally, I felt like it was a move I had to make,” Kieger said. “I’ve had goals and aspirations since I was about 12 years old that I feel like I need to keep building towards. … I want to compete for national championships.”

She said going to a public school and competing in the Big Ten gives her a different challenge than in the BIG EAST.

“It’s a different level with football,” Kieger said. “I don’t think it’s necessarily better, but I just think it’s different. And I need to challenge myself. … The Big Ten is just a different market on a bigger stage.”

The loss of Kieger comes weeks after Marquette lost its most accomplished senior class in program history. The six-person class had five 1,000-point scorers.

“She’s a great coach. There’s no question,” athletic director Bill Scholl said. “We will always applaud Carolyn for (her) efforts. She’s one of our own.”

“It’s difficult to express how thankful we are for not only what Carolyn did for our women’s basketball program and athletics department, but the entire university,” Scholl said in a statement. “She has been a tremendous ambassador for the Marquette family since her time as a student-athlete here.”

“It’s definitely sad, but it’s what she had to do,” Lott said. “We definitely understand.”

The Golden Eagles were slated to have eight freshmen arrive on campus next fall, but Shemera Williams reopened her commitment four hours after the news broke. No other recruits have publicly reopened their commitments yet.

Williams received significant pushback from fans for her decision to reopen her commitment.

“It’s so much hate,” Williams tweeted. “Y’all gotta remember I’m still a kid and I’m only 17. But I know God got me and will do right with me and be by my side on whatever decision I make.”

Kieger said she doesn’t know whether any of her assistant coaches will go with her to Happy Valley. She estimated those decisions will “go down in the next couple weeks.”

Scholl said Kieger’s staff is remaining at Marquette for now and will continue to work with the team. The search for a new coach will begin immediately, although there is no timetable for when a decision will be made. It’s Scholl’s first coaching hire since taking the athletic director position in 2014.

“I want to be as efficient and quick as I can be,” Scholl said. “We owe that to our student-athletes to make this happen as fast as we can make it happen, but I’m not going to sacrifice getting the right candidate just for the sake of moving fast.”

He said he’s looking for someone who fits Marquette’s values and has a track record of building “the right culture.”

He declined to comment on whether anyone already in the program will be considered for the position.

“We will hire a great coach, and we will push on,” Scholl said. “We will continue to compete at the highest end of the BIG EAST, and we expect more great stuff out of our program.”

Kieger’s five-year tenure at Marquette came after six years as an assistant coach at the University of Miami. This move prompts Marquette women’s basketball’s second search for a head coach since 2014, which was before Scholl’s tenure.

Lott said on April 3 no next steps have been discussed yet for the team.

“Hopefully we made the jersey better than when we found it here at Marquette,” Kieger said. “Hopefully, as we say, we left our ‘Marq.’ Now it’s somebody else’s turn to do that and keep raising the program.”