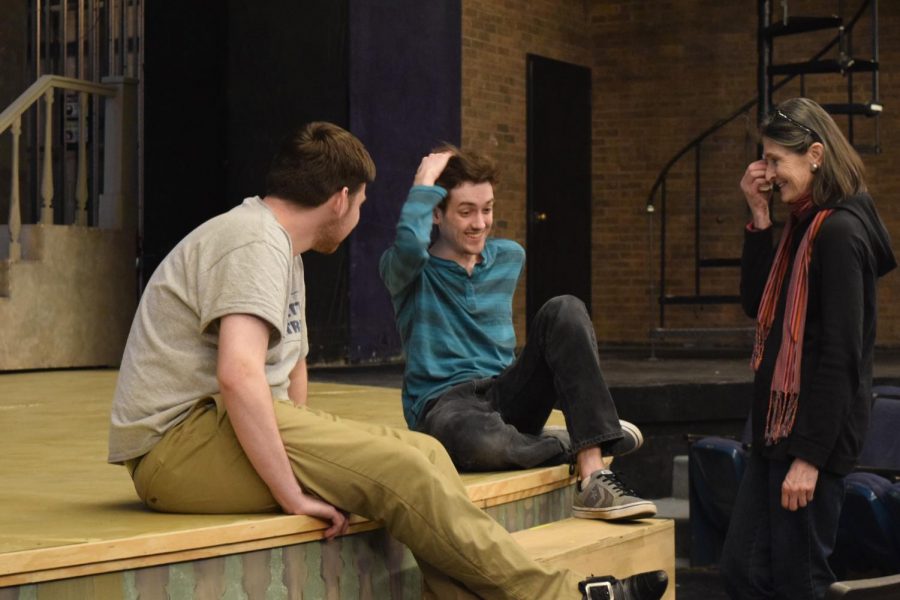 As the annual period piece in its production season, Marquette Theatre opens “The Rivals” Friday at 7:30 p.m. The play runs April 5-7 and April 10-14 at the Helfaer Theatre.

Written in 1775, “The Rivals” is a comedy that tells an interwoven and complicated love story. Captain Jack Absolute falls in love with young heiress Lydia Languish, but because Lydia wants a romantic love story like she reads in novels, Jack pretends to be a poor army officer named Ensign Beverly. Meanwhile, Jack’s father wants to arrange a marriage between Jack and Lydia, but Lydia is only in love with Jack’s false identity. Confusing exchanges of letters follow, as multiple suitors pine after the same person and confuse identities.

Although written over 240 years ago, “The Rivals” coined a term that is still used today. According to ThoughtCo., the word “malapropism” — which refers to the use of an incorrect word in place of the correct word because they sound similar — is named after Mrs. Malaprop, Lydia’s guardian and one of the comedic leads of the play.

Maureen Kilmurry, an adjunct instructor in the Theatre Department and director of “The Rivals,” has taught at Marquette for 21 years and has directed for about 20.

Kilmurry said planning for “The Rivals” began about nine months prior to the show’s opening. Auditions for the show were held in October, and rehearsals began in February.

“The show takes place in Bath, England, so everyone’s got accents,” Agnes Connolly, a junior in the College of Communication, said.

Connolly said the actors playing servants have “cockney” accents — the dialect associated with the British working class. The upper class have traditional, proper British accents, people from rural areas have country accents — which border on Scottish — and one character has an Irish accent.

Connolly plays Lucy, Lydia’s maid who is viewed by many characters as innocent and simple, but actually gets involved in delivering letters and revealing information.

Cooper Adams, a junior in the College of Communication, plays David, the servant of Bob Acres, one of Jack’s friends.

“I think just a general challenge is, I mean, of course the language … but just actually understanding what you’re saying,” Adams said. “You need to do your research before you come in to even the first rehearsal.”

Jackson Hoemann, a sophomore in the College of Communication, plays Faulkman, a friend of Jack’s who has his own sub plot with his love interest Julia, whom he expresses anxiety and jealousy over.

Hoemann said a challenge he faced in the production process was developing his character to be a real, believable person.

“I feel like, with the style of how the play’s written, and with all these period mannerisms, and just everything being, like, of the 1700s, it would be so easy to just go ahead and be like, ‘Hey, these are stock character tropes, and we’ll just play them like that,’” Hoemann said. “But these are all real characters, and they all have their own, like, personalities and emotions, and they’re all dynamic.”

Hoemann said portraying believable characters, specifically through language of the mid-18th century, has been a challenge for the whole cast. However, Hoemann said everyone has made progress.

Like Adams and Hoemann, Kilmurry also said the language of a period piece requires actors to put in work to learn how to portray the story to the audience in a believable way.

There is a “…big leap of making the words you’re given by the playwright, so when (the actors) say them, they’re their words; you feel like that actor owns those words,” Kilmurry said. “So it’s the same challenge as Shakespeare, kind of. Even though it’s, you know, 150 years closer or whatever, it’s still not exactly like we talk, and to make it their own and not just words is crucial or the audience will never follow.”

Hoemann said the play’s costumes might be his favorite of all Marquette Theatre productions he has been a part of.

“All the guys are wearing tights,” Hoemann said. “And we’ve got … shoes with heels and buckles, and then, we’re all wearing breeches too, and it’s a lot of layers, a lot of vest, a lot of coats, a lot of tri-cornered hats. It’s very much clothing of the time.”

All the women, Connolly said, wear corsets and layers of skirts. And all but one actor wears a wig, Kilmurry said.

The cast is made up of 13 actors that play 14 roles; one actor plays two. Additionally, Kilmurry said, there is a “deck crew” who is in costume during the show but helps move set pieces. There is also a costume crew to help actors get  in their costumes, two stage managers, lights and sound crew, and builders. Guest scene designer Julie Ahlgrim, a Marquette graduate, designed the set. The show’s costume designer is artistic associate professor of digital media and performing arts Debra Krajec, and the lighting designer is artistic assistant professor of digital media and performing arts Chester Loeffler-Bell.

“I love doing period pieces, and often those are the ones I get to (direct),” Kilmurry said. “The Shakespeare gets thrown my way … to me that’s a really fun challenge, is bringing them to life to modern audiences and, you know, that there’s a reason they’re still done.”

Hoemann agreed the play can resonate with modern audiences.

“This is basically the 1700s version of a modern romantic comedy,” Hoemann said.