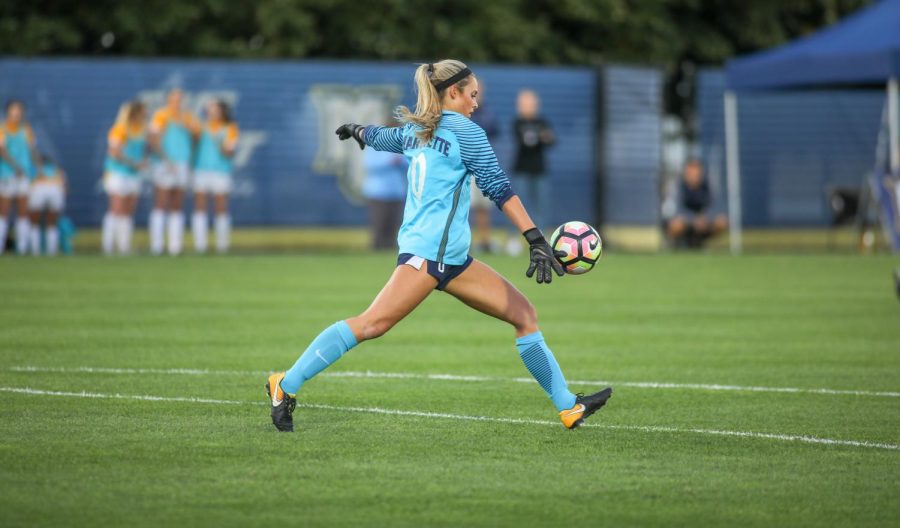 “None of us were satisfied,” junior goalkeeper Maddy Henry said after the team’s exhibition game Saturday against Iowa.

Now the program is looking to use its spring exhibition season to springboard itself from a four-win season to becoming a contender for the BIG EAST title in 2019.

“It seems like a lot to go at after last season, but frankly with the turnaround we’ve had lately and the players we have, I think we can do that,” Henry said.

Henry and the Golden Eagles will have plenty of challenges following head coach Markus Roeders’ first losing season as head coach at Marquette.

“We can’t turn back the time,” Roeders said. “Last year is what it is. You learn from it. More than anything, nobody wants to have that experience again.”

Marquette is losing a seven-person senior class that includes its leading scorer Carrie Madden, a player who played on the Philippines national team, Ryley Bugay, and former All-BIG EAST Freshman Team honoree Jamie Kutey. The Golden Eagles are also losing freshman defender Katie Koker, who played in all 18 matches in 2018, after she announced her transfer to Minnesota.

The team’s turnaround from a disappointing 2018 season had a hiccup Saturday. It lost 3-1 to Iowa, a team that finished 114th in the NCAA’s Ratings Power Index last year. MU was without seven players, including Kylie Sprecher and Abby Hess. Roeders said some who played were not necessarily 100 percent healthy, either.

It has forced defender Maddie Monticello to play out of position.

“It sucks not having them out here right now, but I do like the adversity that it’s put us under,” Henry said. “We have players playing in different positions.”

Roeders said the team needs to be healthier heading into the fall season to have a chance at the team’s ambitious 2019 aspirations.

“We have to be healthy,” Roeders said. “Then we have to play within ourselves. … We might have to be a little more scrappy than pretty sometimes.”

The Iowa game Saturday showed glimpses of what Marquette is looking to do next year, but the short-handed Golden Eagles left fans restless.

“I’m sorry, but that was crap,” one fan yelled during the first half.

Roeders admitted progress will be made in “baby steps.”

“You see more and more glimpses of it,” Roeders said. “We’re still young in some areas.”

Roeders is also not putting too much weight into the result of the 3-1 loss.

“You want to win, but we could have an all-out winning (spring) season, and it doesn’t necessarily translate to the fall,” Roeders said. “You need to learn how to win as well, but it’s not everything.”

Henry said she’s hoping this adversity prepares Marquette to return to the NCAA Tournament for the first time since her freshman year.

“Honestly, freshman year, it was cool, but I didn’t realize the weight of it at the time,” Henry said. “Going back and being able to appreciate it even more, especially as a senior, that would be a dream come true.”

Henry is confident her team can return to the NCAA Tournament.

Roeders was a little more realistic, but he has the same goal.

“We want to put our flag on the mountain top,” Roeders said. “At the same time, we have to be realistic and look in the distance and see where it’s at. In between, it’s a process. … It’s going to be hard work.”