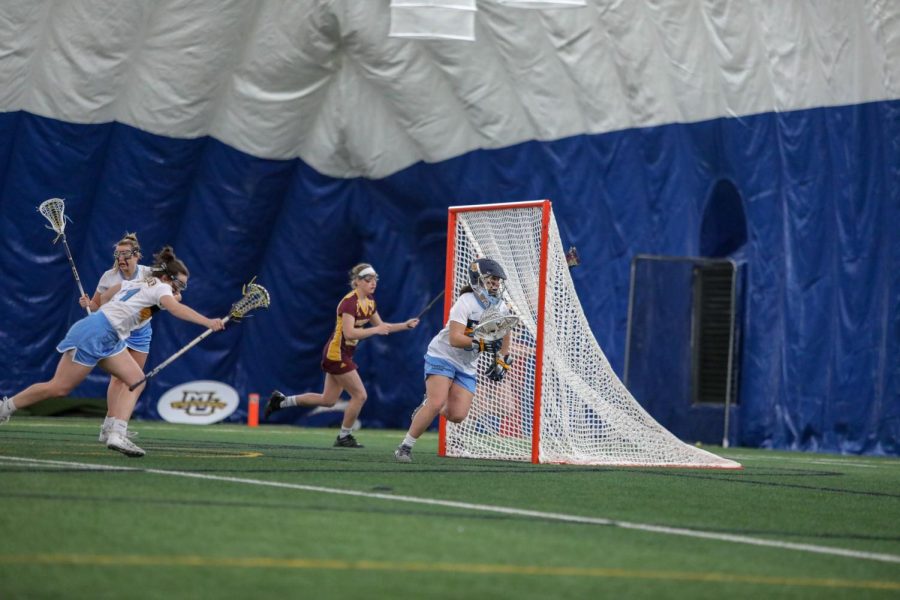 Women’s lacrosse head coach Meredith Black has an unusual thing to brag about: her back-up goalie.

“I always say we have the best back-up goalie in the country,” Black said. “Both (starter Julianna) Horning and (backup Sophia) Leva are really strong goalies and I have all the confidence in the world in them.”

Horning is a junior captain and usually the starting goalie for Marquette, while Leva is a sophomore and the back-up goalie.

Black said she appreciates the depth of goalies on Marquette’s roster. In the Golden Eagles’ most recent game against Villanova University March 30 Horning started out the game, but Leva was shortly substituted in and was what Marquette needed in the goal that day.

Both Marquette’s goalies weren’t always protectors of the cage. Along with goalie, Leva played other positions in high school.

“We had three goalies, so to keep from sitting on the bench, I played wherever I was needed, which kept my stick skills sharp and also shaped my style of play as a goalie,” Leva said. “I could understand the mentality and positioning of an attacker.”

Leva’s versatility allows her to prepare her team’s attackers while also giving herself a better idea of how to defend against opponents’ attackers.

Horning had a late start to the position.

“I started playing lacrosse in first grade as a low attacker and didn’t begin playing goalie until around sixth grade,” Horning said. “I think being a goalie is a completely different game.”

Aside from the quick reflexes and strong focus necessary, the position also poses a mental challenge.

“The mental aspect is the toughest part of this position,” Horning said. “Learning the technical fundamentals is pretty easy, but being able to stay positive can be hard as a goalie.”

That includes having a short memory.

“In the position of a goalie you have to have a short memory because the reality is that you are going to get scored on. It’s a fact,” Leva said. “You have to be able to mentally reset, shake it off and inherently become a positive person. … Otherwise, you will get down on yourself quickly.”