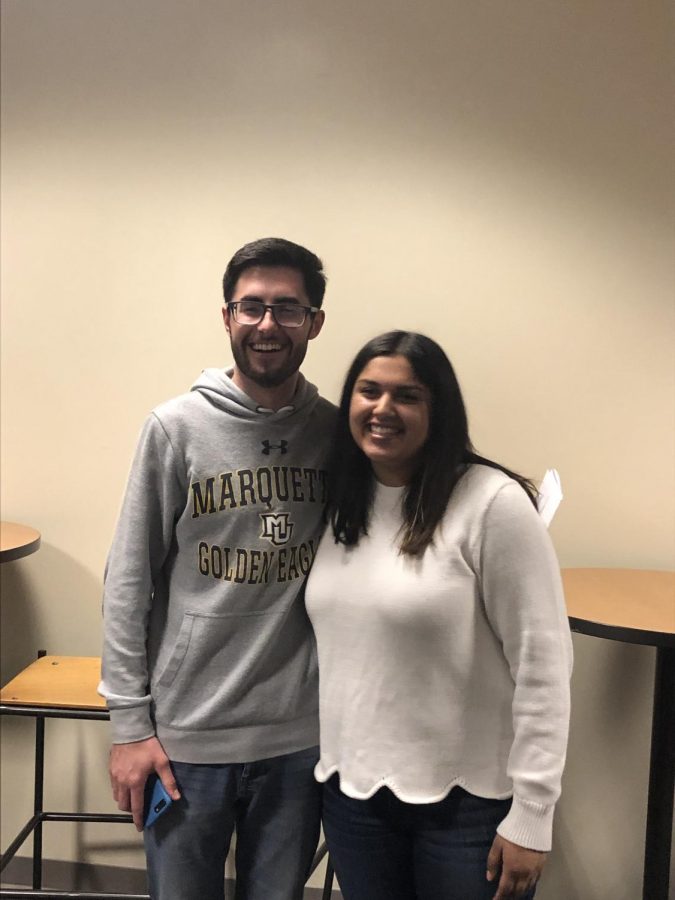 Dan Brophy and Sara Manjee stand together after the results from the 2019 spring elections were announced. Brophy will be the new executive vice president and Manjee will be the next president for MUSG.

The ticket received about 68 percent of the votes. There were 2,216 votes cast March 28, according to MUSG final results.

The results were announced at 5 p.m. in the Alumni Memorial Union after being postponed due to appeals proceedings regarding election violations, Meredith Gillespie, senior in the College of Arts & Sciences and current MUSG president, said.

“We’ve been able to do this because of all the support,” Brophy said. “We were able to win because of the people around us who supported us and the people who were willing to do this with us. That’s what mattered the most.”

Manjee said she is excited to move forward by continuing to meet people and make connections.

“I’m most excited to keep connecting with people,” Manjee said. “These past two weeks, I heard a lot of stories and walked in the shoes of a lot of people. I’m excited and nervous and humbled to do that for another year.”

On the other running ticket for MUSG president and executive vice president was Peter Feider, a senior in the College of Engineering who is in a five-year program, and Faezh Dalieh, a senior in the College of Arts & Sciences, who is also in a five-year program. Feider was running for president and Dalieh for executive vice president. The ticket received about 22 percent of the votes,  according to MUSG final results.

Brophy talked of the past two weeks and how his and Manjee’s visits with student clubs and organizations helped the ticket along the election path.

“Every time over the past two weeks when we were smiling instead of feeling stressed was when we were at student organization meetings, talking with students,” Brophy said. “We got to talk about Marquette’s problems and its strengths and why this is home for so many people. That’s what we are most excited about in the upcoming weeks.”

The rest of the MUSG results were delivered at noon in the AMU March 29.