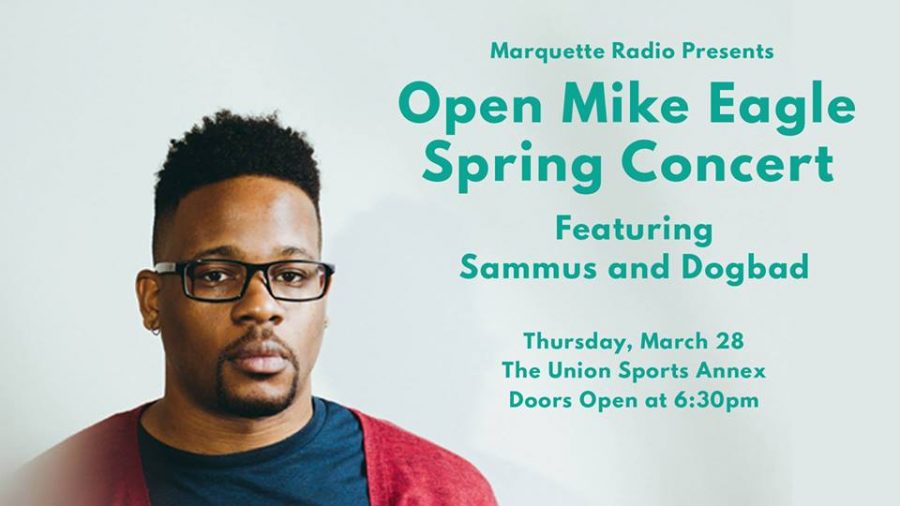 Open Mike Eagle will begin his tour with a stop at Marquette Thursday. Photo courtesy of Marquette Radio

Hip-hop fans can come together at the Union Sports Annex for the Marquette Radio Spring Concert this Thursday, beginning at 6:30 p.m.

Dogbad, a band from University of Wisconsin-Milwaukee and 2018 Battle of the Bands participants, will open the show at 7 p.m. They will be followed by Video Dave, an artist from Chicago, Sammus, a rap artist based in Philadelphia, and Open Mike Eagle, a rapper originally from Chicago.

Marquette is Open Mike Eagle’s first stop on his “The Still Can’t Relax” tour, on which he will be joined by Sammus and Video Dave. They will visit 12 cities on his tour, which will run through April 20.

Open Mike Eagle said he was drawn to the performance of hip-hop culture in high school where he began rapping, breakdancing and doing graffiti. He said he became in tune with the hip-hop community in Chicago.

“Chicago made it accessible,” Open Mike Eagle said. “I grew up with rap, but I thought of it as something other people did.”

Open Mike Eagle said he began his career by free styling, entering rap battles, then creating verses and eventually recording. He said he found hip-hop culture through different crews in Chicago. He said his high school crew went to Promontory Point, a hub for the arts, on the south side of Chicago every Tuesday and Thursday. It was there, he said, that they met Nacrobats, a prominent hip-hop crew.

Open Mike Eagle said his first time in the studio was with Nacrobats, referring to this as his first big move. Though an important moment in his career, he said it wasn’t his best work.

“You suck at first,” Open Mike Eagle said. “Everyone does.”

Open Mike Eagle said it was in college that he began performing shows, which pushed him to write songs. This eventually led him to creating records and projects.

“Touring is the best part, even though traveling can be hard,” Open Mike Eagle said, adding that tours are great for connecting with fans. He said he gets to put names and Twitter handles to faces and it brings him closer to genuine fans.

Dogbad is not unfamiliar with college audiences, Isaac Repinski, a member of Dogbad, said. Repinski said all five band members met at UW-Milwaukee, some through mutual friends and others through a summer program or on the music scene. He said they officially formed in January 2018, and their first official performance was at Marquette’s 2018 Battle of the Bands.

Although they didn’t win, Repinski said they had a lot of fun. Since Battle of the Bands, Dogbad has performed at various bars as well as attic and basement shows and one show in Chicago, Repinksi said.

The audience can expect a mixture of indie rock, funk and surf from Dogbad at Thursday’s event, Repinski said. Dogbad will mostly be performing original songs, but will add in a few covers.

“The goal is always to get the audience pumped and have fun,” Repinski said.

Samantha Dudgeon, a sophomore in the College of Health Sciences, said she likes going to concerts for the environment they produce.

“I like the atmosphere of a lot of people getting together who all like the same music,” Dudgeon said.

While she has not been to the Spring Concert before, Shahd Sawalhi, a freshman in the College of Engineering, said she enjoyed Marquette’s Homecoming concert this year. She said she liked the school-sponsored concert because it was a fun way to spend time with friends after a stressful week.

A fan of rap herself, Sawalhi said the Spring Concert sounds like a fun event.