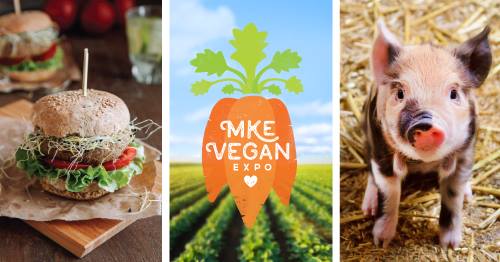 This weekend's vegan expo will be the 4th annual hosted by Milwaukee Vegan Expo. Photo via Facebook

On Saturday, MKE Vegan Expo will be hosting its fourth annual exposition, hosted at University of Wisconsin-Milwaukee.

The expo will take place from 10 a.m. to 5 p.m. in the UW-Milwaukee Student Union. In its fourth year, the expo aims to raise awareness about the impact that food choice has on animals, human health and the environment.

Rachel Golusinski, founding organizer for the expo, said there will be food vendors, speakers, cooking demos and many free raffle prizes.

MKE Vegan Expo has partnered with the Nutritional Sciences Club at UW-Milwaukee to try to reach a younger audience, Golusinki said.

Golusinski said with the power of social media, the younger generation is more aware of where their food comes from, as well as health issues and the environmental impact that comes from the choices they make. She also emphasized that social media helps to shed a light on animal rights as a social justice issue.

“(The younger generation) seems to be more receptive to changing their lifestyle from the traditional way of eating that most of us were taught,” Golusinski said.

This expo is not just for vegans and vegetarians. In fact, Golusinski said she especially encourages people who are not vegan or vegetarian to check out the event.

“A lot of people are surprised when they realize the variety of foods that vegans eat,” Golusinski said. “As a vegan, I eat a much greater variety of food than before I was vegan. Vegans are such foodies and are very much into experimenting and trying different ethnic foods and cooking that a traditional diet is so boring in comparison and a lot of people don’t realize that.”

Vegans often are asked where they get protein.

“Vegans laugh about it because we know that broccoli and beans and nuts and seeds all have plenty of protein so it’s a non-issue,” Golusinski said.

Caroline Cassidy, a freshman in the College of Nursing, said she plans on attending the expo. She said she finds no issue receiving enough protein from her vegan diet.

Cassidy has been abstaining from meat since she was 12. Five years later, she started her vegan journey. Cassidy did research, watched documentaries and read books. She said her findings about environmental impacts, and animal ethics “rocked her world,” and she officially went vegan on Jan. 1, 2018.

Golusinski said she became vegan after having a similar “ah-ha” moment.

“It took me a long time to make the connection. I received an email around Thanksgiving and it talked about how turkeys are confined in huge sheds by the thousands — that they have their beaks cut off and their toes cut off and they never see the sun, they never feel the grass on their feet. Their whole lives are suffering,” Golusinski said. “I then made the connection there that I don’t want to participate in animal suffering. I don’t want to be a part of this.”

Golusinki said she became vegan about nine years ago, but wishes she had started earlier.

Annie Ernst, a junior in the College of Nursing, became a vegetarian in the seventh grade after reading a book called “Eating Animals,” by Jonathan Safran Foer, which covered factory farming and the transition from family farms to big factory farms.

“Nowadays, big factories have monopolized the (industry) and I realized the magnitude of the negative effects that come from eating meat,” Ernst explained.

Cassidy said the transition from a traditional diet to a plant-based diet can be daunting, but it has a greater purpose.

“It’s not as scary as you think it is,” she said. “There’s a huge (stigma) about being plant-based … but at the end of the day, you’re making the world a better place.”

Cassidy explained that starting small with “Meatless Mondays” can be much less intimidating and brings down a seventh of an individual’s weekly carbon footprint. Meat production is widely know to emit significant amounts of carbon.

“(Veganism) puts purpose in little things — my meals are something that has a purpose to them,” Cassidy said.

Cassidy will be attending the MKE Vegan Expo and said it will be both informative for those who are interested in trying plant-based diets and fun for those who already participate.

The MKE Vegan Expo will facilitate a space for learning and fun among like-minded people, Golusinski said.

Ernst said education about food and its creation and impact on the planet is extremely important.

“Anything that can cover that overarching theme of how your diet affects so much more than some people realize is really important — people just need to be more cognizant of it,” Ernst said.