Davenport fills in as coach after injury 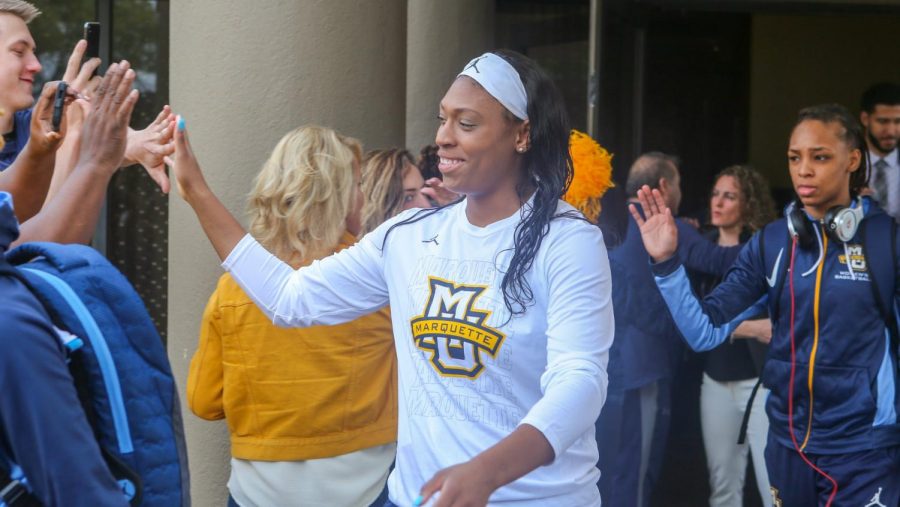 After Erika Davenport went down with an ACL tear against Butler Feb. 22, the senior forward filled a new role for Marquette women’s basketball: player-coach.

“I’m just giving them advice, giving them tips, giving them confidence,” Davenport said. “Whatever they need, I’ll give it to them, making sure that they understand they deserve to be out there.”

“Her perspective is amazing because she went from playing high minutes to no minutes,” Anderson said. “So any question I have or any advice I need, I go to her because she will explain it perfectly.”

“It’s very, very helpful just to be able to hear her. She’ll pull me over after a timeout or when I’m on the bench and give me pointers here and there,” Van Kleunen said. “She’s a different set of eyes that I have, and she’s willing to do that for our team, and that shows the kind of person she is.”

Seniors Amani Wilborn and Danielle King said the advice hits differently when Davenport gives it compared to hearing it from a coach.

“A lot of times you don’t want to hear it from the coaches, but hearing it from your other counterparts, she’s seeing it and she played so she knows what she’s talking about,” King said.

The team has rallied around Davenport since her injury, and players have said multiple times they’re playing these games in honor of her.

“(We’re) just letting her know that she’s just as big, if not more, a part of the team as before,” Wilborn said. “We’re still 14 deep, and we’ve got everybody as a team. We’re going to do it for her and it’s just more inspiration.”

Different players have taken different methods to fill the void of their sidelined comrade. Freshman Chloe Marotta has sought to make her presence felt on the boards.

“One of Erika’s biggest things was rebounding,” Marotta said. “Whenever I’m on the court, I make sure that I get after all the boards and grab as many rebounds and add up my rebounds each game to take from her rebounding.”

Meanwhile, King said she tried to recreate the intensity that Davenport brought.

“(I’m) just playing with the fight that Erika had and the tenacity that she brought to the floor, trying to replicate that on the floor night in and night out,” King said.

Van Kleunen said she simply tried to make an impact in any way possible, because that’s what Davenport did.

“She brought rebounding, energy, everything,” Van Kleunen said. “So anything we can do, diving on those balls, all those hustle plays she does, we do that for her.”

Senior Allazia Blockton takes a much different approach, letting Davenport’s infectious energy pick her up in down times.

“When stuff gets hard, when we lose, and every day when it gets hard, when I feel like I can’t do anything anymore, (I’m) just thinking about Erika and how hard she works and how much of a competitor she is,” Blockton said.

Davenport said she’s touched by the gesture and support of her team.

“It means a lot. We always talk about how our chemistry is. They’re going to go out there and play and have my back,” Davenport said.