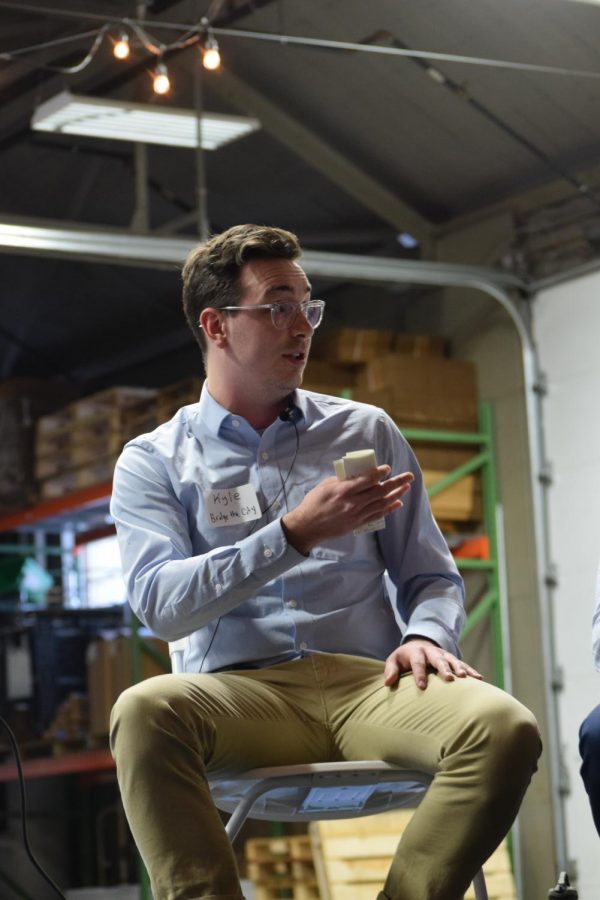 The Bridge the City podcast was a part of the event.

As people gathered in the taproom of MobCraft Beer in Milwaukee, enjoying pizza and drinks, state Rep. Evan Goyke attempted to bring the room back to reality.

It was likely, he said, that a young African-American man in the city was currently coming into police contact.

In fact, from 2011 to 2015, black drivers encountered traffic stops by Milwaukee police at more than six times the rate of their white counterparts, according to a 2018 report by David Abrams, a professor of law, business economics and public policy at the University of Pennsylvania.

“The rules that are being applied and how they’re being applied to him are different than they would be if it were me in this suit and tie standing on the same street corner in the city of Milwaukee,” Goyke said.

His observation was part of a conversation about peace, crime and justice in Milwaukee at a political open mic event, held at 6 p.m. last Thursday, which included a panel, featured speakers and an audience open mic session.

The evening’s discussion was hosted by the Bridge the City podcast along with NEWaukee, a professional agency that facilitates events in the community.

Kyle Hagge and Ben Rangel, both Marquette graduate students and Trinity Fellows, serve as co-creators, executive producers and hosts of Bridge the City. The podcast focuses on a variety of local issues, and it invites individuals to share ideas and potential solutions regarding issues in the city, ranging from police-community relations to education.

Trinity Fellows are part of a 21-month program dedicated to developing urban leaders with a commitment to social justice, according to its website.

“A podcast is something you listen to. You’re on your own. It’s very mobile,” Rangel said. “But we know that you can’t really make huge changes just by listening to things. You need to act. You need to come to events like these and speak to people who have different opinions than you.”

Milwaukee Mayor Tom Barrett attended the event and provided opening remarks. If Milwaukee is going to be a great city, he said, it is necessary for the community to talk about the challenges it faces.

“I think we’re all mindful of the stories we read about race in Milwaukee, race in Wisconsin, and the differences in treatment for people depending on their race in the law enforcement field (and) in the criminal justice system,” Barrett said.

Chisholm said one of his aspirations is to ensure that people with mental health conditions are kept out of jails and prisons.

The district attorney touched on the state funding process for his office. The state allocates money to district attorney offices based on how many cases are issued by the offices, he said. This could pose a problem if the office attempts to divert people outside of the criminal justice system.

“It’s a crazy formula, and as a consequence, for the last 30 years our office has had to supplement that funding through federal grants and working with community organizations,” Chisholm said, adding that the nonprofit Near West Side has supported the office with funding.

Chisholm said the money saved in Milwaukee by diverting people from the criminal justice system should be given back to the city to tackle local issues, such as more affordable housing and funding for community organizations. This concept is referred to as justice reinvestment.

“If a portion of that (money) were coming back to Milwaukee, we could expand the capacity of this community to solve its own problems,” Chisholm said. “We have to incentivize solving your problems locally and only reserving prison for people that pose an immediate and long-term, persistent danger to the community.”

Reggie Moore, the director of the Office of Violence Prevention, touched on his office’s Blueprint for Peace, which outlines strategies and goals to address and prevent violence in the city. His office gathered community input during the blueprint’s creation process, he said.

“In terms of the road being ahead of us, it’s really about the community holding public officials accountable to say, ‘The community has told us what it wants, are we going to back it with the resources and policies to make it real?’ Because I would argue that it’s perpetuating trauma to ask the community what it wants and not give it to them,” Moore said.

“If a neighborhood doesn’t have those two components — social cohesion and informal social control, or this idea of collective efficacy — it suffers from a great deal of insecurity,” Sanders said.

Patrick Wolf, a distinguished professor of education policy at the University of Arkansas and featured speaker at the event, discussed the Milwaukee Parental Choice Program, which allows parents to apply for their children to attend participating private schools. If students are accepted, the schools they attend will receive state aid to cover the students’ educational expenses.

Wolf talked about his own research, which he said shows that students in the MPCP had less convictions for property crimes, less convictions for drug crimes and a smaller likelihood of being named in paternity suit — which determines the biological father of a child — than their public school counterparts.

“I conclude from all this as an evaluator and social scientist, that the MPCP appears to be a highly effective anti-crime initiative, and I’ll drink to that,” Wolfe said.

An attendee in the audience yelled out at the end of Wolf’s speech, claiming that it was not right for him to be at the event. The man exited the event before he could expand on his statement.

“It was the first time where I’ve ever been a part of something where that happened,” Hagge said. “I think it means we’re kind of touching on an uncomfortable topic that needs to be addressed … I don’t think you’ve ever made it until you’ve had a heckler.”

Rebecca Dallet, a justice on the Wisconsin Supreme Court, also spoke at the event, and she acknowledged that it can be difficult for judges and justices to discuss policy. She said they can ensure rules are applied fairly, and she subscribed to the ideology that justices should act as umpires calling balls and strikes.

“The reality is, though, by the time a case gets to us as a judge in a trial court — or even more rarely, in front of us on the Supreme Court – most of the subjective decisions have already been made,” Dallet said.

Courts should be more transparent in their functions and processes, she added.

“Our Supreme Court and every court must lean more toward trasnparency,” Dallet said. “Long past are the days when only elites could know and discuss and engage in the issues confronted in our courts.”

Dallet said courts should recognize the importance of implicit bias training for judges, which she said is required in the state of Wisconsin.

“We as practitioners in the law, we have to decide that we believe that bias has an impact, and we have to make sure that everyone is being treated fairly and impartiality,” Dallet said.

The audience open mic portion of the evening included conversations about prosecution for prostitution, marijuana legalization, the electoral college and unwarranted police stops.

Rangel said the panel, which included Chisholm, Sanders, Moore and Goyke, was more nerve-wracking than serving as the master of ceremonies for the entire event.

“Once you get into the groove of things and sort of just realize you’re having a conversation with them, it’s pretty good,” Rangel said.

Hagge said this event was planned to occur before the upcoming spring election, which will take place April 2.

There will be a few more events in the series on topics such as K-12 education, health care and housing, which will all be hosted by NEWaukee and Bridge the City at various area locations, said Jeremy Fojut, the chief idea officer and co-founder of NEWaukee.

Fojut said in-person experiences at events like these are needed as more and more people become socially isolated.