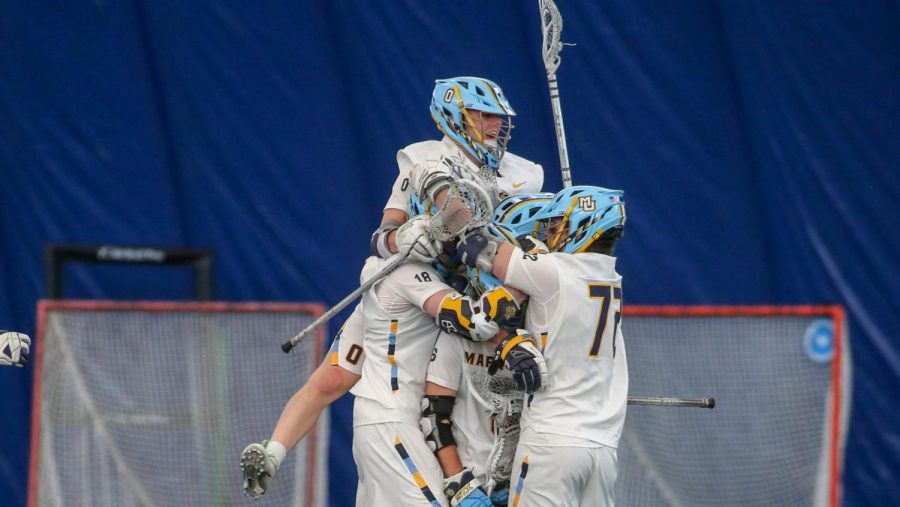 Marquette men’s lacrosse seemed to enter Saturday’s matchup against the No. 14 Georgetown Hoyas fully prepared to head home with a loss.

“They’re playing like the defending champs. I’m not sure we match up with them,” head coach Joe Amplo said before the game. “It’s going to be a real challenge for us.”

But the Golden Eagles embraced the underdog mentality and eked out a 9-8 upset in their first game of the BIG EAST slate.

Marquette has now won the last four meetings with the Hoyas, all decided by just one goal.

Georgetown had an early 2-1 lead, but Marquette used a 6-0 run in the second quarter to carry a 7-2 lead into halftime. MU also scored the first two goals of the second half to take a 9-2 lead.

Then the Hoyas snatched the momentum with six unanswered tallies to cut MU’s lead to 9-8.

Georgetown had the ball with around two minutes remaining, but Marquette redshirt sophomore Anthony Courcelle caused a huge turnover to gain possession back for Marquette. The Golden Eagles then ran out the clock with crucial ground-ball pickups by redshirt seniors Andrew Romagnoli and Jack Zerrillo in the final minute.

For the Golden Eagles, redshirt senior Tanner Thomson led the way with three goals, while Romagnoli and junior Luke Anderson each added two.

Juniors Ryan Fazio and Peter Henkhaus each contributed a goal. Fazio and senior John Wagner each put up two assists.

In goal, sophomore John Hulsman played all 60 minutes and made a season-high 12 saves while allowing eight goals. Freshman Thomas Washington went 10 for 17 at the faceoff dot.

Marquette (5-3, 1-0 BIG EAST) will now head to Pennsylvania for a matchup with Villanova Saturday at 12 p.m. Central Time.