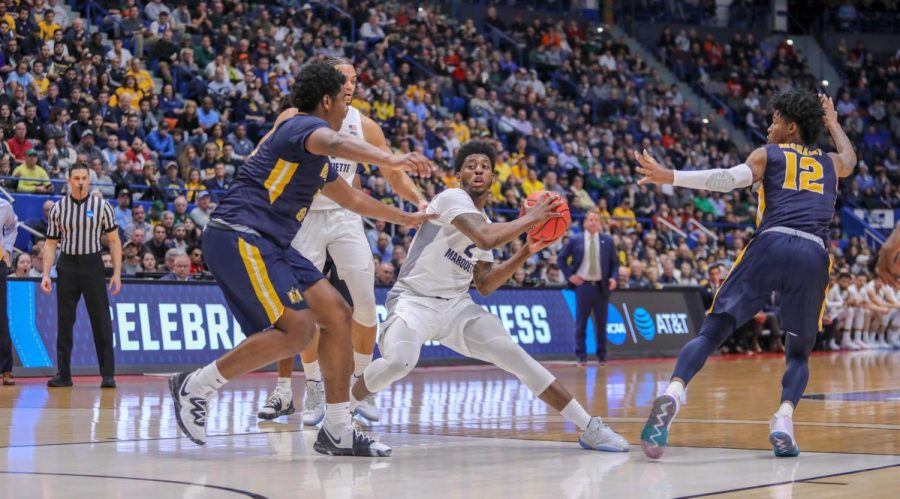 His team couldn’t do much more on the floor either, losing 83-64 after being outscored 41-29 in the second half.

Marquette remained within 10 points for the entire first half, but then the Racers started the second half on a 22-9 run.

“They got a lot of momentum on offense,” junior guard Markus Howard said. “They had some big plays that they made, and it kind of gave them some juice.”

“We just couldn’t find ourselves,” freshman forward Brendan Bailey said. “We couldn’t play the way we know how to play … it was just one of those days. It just happened to be on the worst day that it could’ve happened.”

Morant was at the heart of Murray State’s offensive attack, scoring 17 points, 16 assists and 11 rebounds.

“You’re talking about an elite, elite decision-maker who’s got elite athleticism,” Wojciechowski said. “You can run two people at him, you can switch, try to get the ball out of his hands, (but) there’s nothing that we found that could speed him up or shake his decision-making.”

He only hit two field goals in the first half, yet he scored or assisted on 16 of Murray State’s first 18 points.

For every assist Marquette’s entire team had, Morant had almost three.

Despite the historic performance, Morant only rated his game play as a 3.5 out of five.

Marquette’s path to March Madness required playing guards like Shamorie Ponds, Myles Powell and Phil Booth, but no guard gave the Golden Eagles the quarrels Morant did Thursday. Bailey attributed it to Morant’s “ability to see the whole floor.”

Marquette junior forward Sam Hauser was the only other player to score in double figures. No individual Marquette player shot better than 40 percent from the field, and MU shot 32 percent overall.

“(We tried to) basically make all their shots tough and not give them any easy, wide-open looks,” Murray State guard Tevin Brown said.

The loss caps a disappointing end to the 2018-‘19 season. After moving up as high as No. 10 in the Associated Press Poll, the Golden Eagles lost six of their last seven games.

“I don’t know if we can point to any one thing, but we certainly didn’t play as well at the end of the season as we did for most of it,” Wojciechowski said. “We’ve got to really examine that and figure out why.”

Marquette has lost its two NCAA Tournament games in Wojciechowski’s tenure by a combined 39 points.

The Golden Eagles will only lose one scholarship player — Matt Heldt — to graduation, but Howard may consider a professional career.

“I’m disappointed for my team, especially the seniors, but there’s a lot of lessons that we can learn from this year,” Wojciechowski said.

“It hurts to go out this way, but this isn’t going to be the last time that you’ll see us here,” Bailey said.