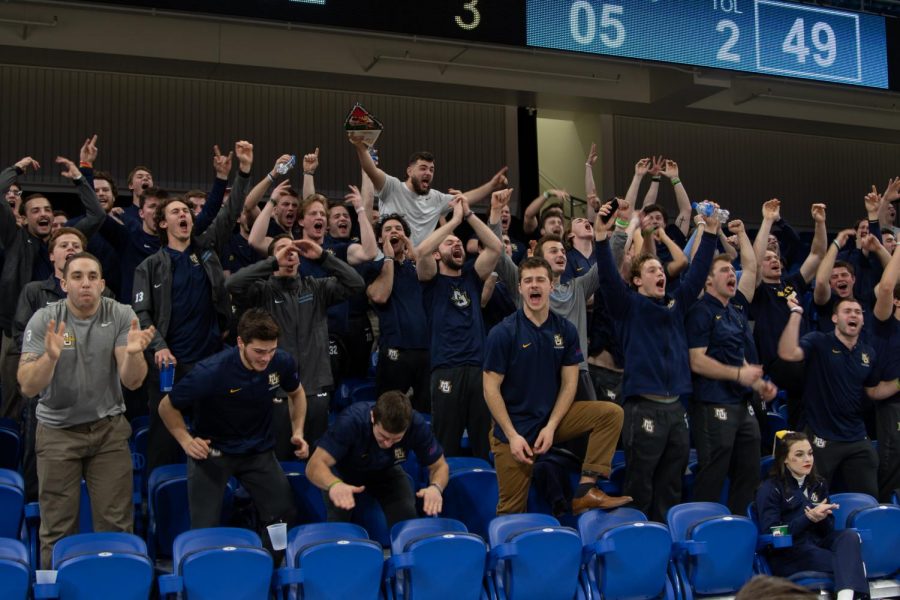 At 2 p.m. March 12, Marquette men’s lacrosse was in Pennsylvania taking down the Robert Morris Colonials, a team receiving votes in the Inside Lacrosse Top 20 poll.

At 7 p.m. that same day, the team was in Chicago supporting the Marquette women’s basketball team in the BIG EAST Championship.

“I looked at our flight itinerary and realized that we should be able to make the game,” head coach Joe Amplo said. “We were not going to miss an opportunity to be there for Coach Kieger and her team as they compete for a championship.”

The team was already going to fly into Midway Airport in Chicago, but Amplo said the team had a boisterous response to the surprise of going to the women’s game.

“Honestly, I’m not sure if they were more excited about this or for the game (against Robert Morris),” Amplo said. “They truly care about these kids, they see how hard they work and it’s great that they’re here to watch them compete.”

Amplo’s squad has a reputation around Marquette for coming out to cheer on other teams.

Last season during the men’s basketball National Invitational Tournament at the Al McGuire Center, the lacrosse players occupied the seats behind the basket and caught national attention for their free-throw distractions like the roller coaster and tug-of-war movements.

Earlier this year, the team loudly supported the women’s volleyball team in its big victory over High Point Nov. 30 in the NCAA Tournament.

Rolfing was one of the students who organized the efforts for the National Invitation Tournament last year.

“It was spring break, we were in Milwaukee at the men’s basketball game (and we) wanted to try to make it fun,” Rolfing said. “I thought of some stuff that I’d done in high school, and it seemed to help the team.”

Amplo said trips like this are the epitome of what collegiate sports are supposed to be.

“This is what makes our department so unique and so special,” Amplo said. “These kids truly want to be here and are going to be fully engaged for the rest of the night.”

Amplo said this is part of the team’s effort to be an engaged group on campus.

“From day one, we said we want to be a positive member of this community,” Amplo said. “Whether that’s just being nice people on campus, engaging with professors or different community members, or being a large presence at an athletic event, that’s our duty as citizens of Marquette, and we’re happy to do it.”

As a thank-you for the continued support of Amplo’s team, Kieger gave the pump-up speech before the lacrosse matchup against Michigan Saturday, and the entire women’s basketball roster showed up to cheer on men’s lacrosse to a big victory.

Even though the lacrosse team wasn’t able to will women’s basketball to a BIG EAST title, the basketball players were still appreciative of the support.

“Thanks to them for coming and making the trip to support us,” senior guard Allazia Blockton said. “It just shows you how tight knit the Marquette family is. When it’s a big game, everyone comes out and supports each other.”

John Steppe contributed to this story.