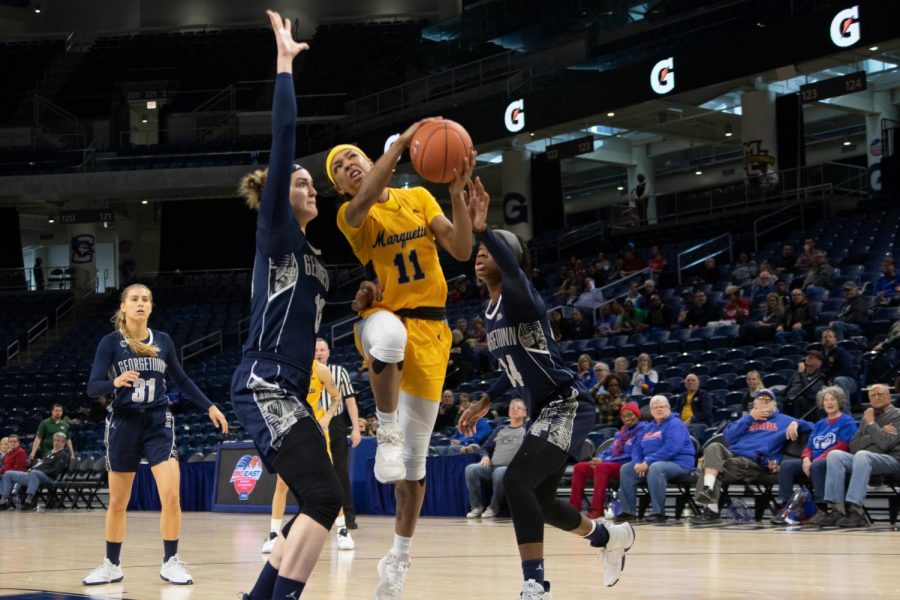 CHICAGO — For its third consecutive season, Marquette (26-6, 15-3 BIG EAST) will be playing in the BIG EAST title game. The top-ranked Golden Eagles defeated No. 4 Georgetown 75-62 Monday afternoon. Here are three takeaways from the matchup:

Strong guard play helps Golden Eagles
With senior forward Erika Davenport out, Marquette has needed to start five guards and lacked a post presence. However, that hasn’t hindered the Golden Eagles in their past two BIG EAST Tournament games.

“You wish Davenport would have played because you can guard them a little bit different,” Georgetown head coach James Howard said. “When you’re playing against five guards who are pretty much all 1,000-point scorers, it (caused) some problems. … They’re 17th-ranked in the country for a reason.”

The Golden Eagles set a program record for BIG EAST Tournament games with 12 3-pointers against Georgetown. Seven of those came in the first half.

Marquette’s senior guards combined for 67 of the team’s 75 points and finished with 10 of the 12 3-pointers.

“These six seniors didn’t come in as McDonald’s All-Americans. They didn’t get the credit they deserved out of high school,” head coach Carolyn Kieger said. “They’ve made a big splash in the nation right now.”

Natisha Hiedeman and Allazia Blockton were especially hot from behind the arc, totaling eight 3-pointers.

“We were moving the ball really well, which was making a lot of threes non-contested wide-open threes” Natisha Hiedeman said.

“I had dreams about it,” Blockton said. “I came out hot, and then (Hiedeman) went on her run and everybody was just knocking down shots.”

Marquette struggles to stop Adomako
When Georgetown’s leading scorer Dionna White wasn’t producing in the first half, someone had to be the spark for the Hoyas. That player was graduate student Dorothy Adomako.

She finished the afternoon with a game-high 27 points and shot 10 for 19 from the field. She made all five free-throw attempts and went 2 for 4 from deep. Adomako and White each played 39 minutes.

“(adomako) is phenomenal in just how she carries herself (and) her work ethic,” Howard said.

It hasn’t just been this season that Adomako has made an impact. Despite missing last year due to an injury, she was a 2016-’17 All-BIG EAST Honorable Mention and has been on the All-BIG EAST Second Team for two seasons.

“Georgetown gave so much to me,” Adomako said. “I really enjoyed playing here. I was lucky enough to play here five years and I’m really going to miss it.”

Golden Eagles remain hungry for payback
Marquette was in the same position at No. 1 seed a year ago, but the team fell to DePaul 98-63 in the 2018 BIG EAST Championship. This season, Kieger has focused on maintaining an “underdog” mentality and always thinking about the present.

“Any time you fail, you use it as a lesson. DePaul played a phenomenal game last year and we did not,” Kieger said. “We’ve done a really good job this year of focusing 200-feet at a time. … The only thing we’re thinking about tomorrow is one possession at a time.”